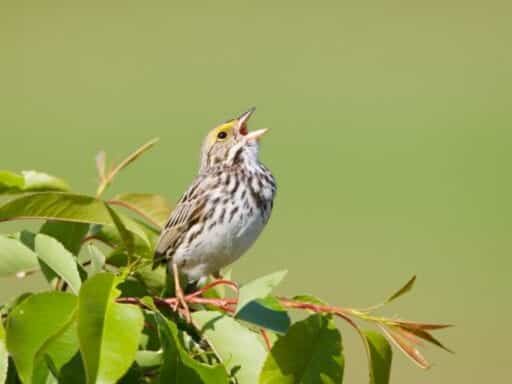 A new study finds 3 billion fewer birds are flying through our skies. But there’s a silver lining.

One of the great environmental crises today — and there are many — is the loss of biodiversity on planet Earth. Human actions have lead to an extinction rate higher than anything seen on Earth in the last 10 million years, as a sweeping UN report recently explained. It’s estimated the average vertebrate (bird, fish, mammal, amphibian) population has lost around 60 percent of its individual members since the 1970s.

Scientists keep telling us that something is going devastatingly wrong in the natural world. Today, a study in Science focuses on the birds of North America, and the results are again eye-opening and grim.

A team of scientists at the Cornell Laboratory of Ornithology, in collaboration with the US Geological Survey and several conservation groups, have estimated North America has lost nearly 3 billion birds since 1970. That’s an estimated decline of 30 percent in the total bird population. In other words: More than one in four birds has disappeared from American skies in the last 50 years.

“It is shocking,” says Adriaan Dokter, a study co-author and bird migration ecologist at Cornell. But even more alarming is the speed at which animals are disappearing: All of this loss is happening, he says, “on the timescale of one human life.”

The new study draws its analysis of 529 bird species from long-standing ground-based surveys, in which citizen scientists send in bird population counts. And the scale of the losses was also corroborated with weather radar data.

Birds, when they’re flying in the sky, actually show up on weather radar. (Maybe you’ve seen: during a hurricane, birds will often show up on radar trapped in the eye of the storm.) And the analysis revealed the biomass (i.e. mass of living things) migrating in the skies at night declined around 14 percent in the past decade.

One of the most surprising findings in the report is that it’s not just rare or endangered birds that have been declining; it’s some of our most familiar species: sparrows and blackbirds that visit our birth baths and fill the air with song.

Dokter went into the study thinking these common birds that live over a wide-ranging area would still be very abundant. But in fact, the greatest losses came from these popular species. The following chart breaks it down. “More than 90% of the total cumulative loss can be attributed to 12 bird families including sparrows, warblers, blackbirds, and finches,” the study finds.

The new study didn’t investigate the causes of the declines; it just sought to tally them. But the declines are probably due to habitat loss and development, the researchers say. As humans have added more infrastructure and buildings to the landscape, more birds have collided with power lines and flown into windows. They’re also getting eaten by house cats at a high rate (really: It is estimated cats kill 2.6 billion birds in North America a year).

“This latest work is entirely consistent with other studies, both in North America and elsewhere,” David Watson, an ecologist at Charles Sturt University in Australia who studies biodiversity and was not involved in the Science study, writes in an email. Watson says we should “scream [the study’s conclusions] from the rooftops.”

To be sure, there are still tens of millions of sparrows and other abundant species in North America. But there used to be so many more.

Regardless of the cause, the widespread decline is troubling for a lot of reasons. Birds play an important role in ecosystems: They eat insects, they disperse seeds, and they’re food for other animals as well. They’re also important for sustainable agriculture by controlling pests (i.e. eating them) and reducing the need for chemical insecticides.

It’s not all bad news: populations of birds of prey and waterfowl have rebounded

The study isn’t entirely bad news, however. There are some species of birds that have been increasing in population, notably waterfowl and raptors (i.e. birds of prey like eagles and hawks) apparently due to conservation policy. The banning of the insecticide DDT saved many of these birds. Bald eagles, a species of raptor, were on the verge of extinction before the Endangered Species Act protected them. And waterfowl may be increasing in numbers due to the conservation of wetlands.

“History shows that conservation action and legislation works,” the study stresses in its conclusion.

How to save birds

The authors of the new paper have set up a website 3billionbirds.org that has some suggestions for people who want to help birds thrive. One is keeping cats indoors. Another is a suggestion to outfit windows with screens to decrease their reflections (and decrease the chances of birds flying into them.

More dramatically, we can reduce the amount of lawn space, letting trees grow in its place (as trees provide better shelter for birds than grass). And generally, we can avoid pesticides (specifically neonicotinoids), littering, and pollution (namely plastic) that can kill birds. See all the suggestions here.

The study warns “avian declines will likely continue without targeted conservation action.” But, the study authors stress that bird populations can recover quickly. And these trends don’t have to end in a bird apocalypse.

“It’s a dramatic story, that’s the risk that people get exasperated by another depressing story,” Dokter says. “That’s what I worry about.”

Remember, we’ve saved birds before. In 1963, there were only 487 nesting pairs of bald eagles left. Now, there are around 10,000. More species can still recover.

Scientists are identifying potential treatments for coronavirus via artificial intelligence
4 winners and 5 losers from the last Biden-Trump debate
A former Republican could win the Kansas Senate race for the Democrats
Rainbow Rowell’s Carry On deconstructed Harry Potter. Wayward Son is what comes next.
The crisis of the 12 Thai boys who were trapped in a cave, explained
What we know about the experimental Covid-19 treatment Trump received