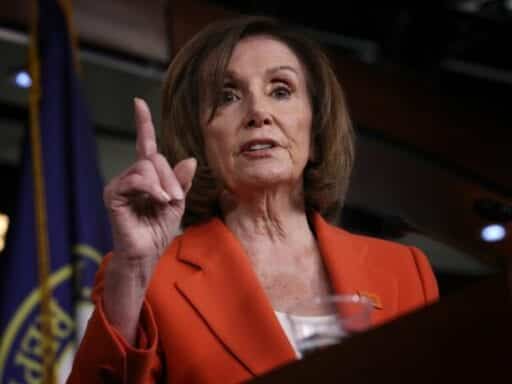 Share
Loading...
House Speaker Nancy Pelosi answered questions and pushed back on the need for an impeachment inquiry during her weekly news conference at the US Capitol. | Win McNamee/Getty Images

As Speaker Pelosi cautions against rushing toward an impeachment inquiry, here are the House members who support it.

About half of the House Democratic caucus is now on record saying they support opening an impeachment inquiry of President Donald Trump.

The counts from various news outlets differ somewhat, but according to Politico’s latest tally, it’s now 127 of 235 House Democrats. The group has gained several important allies since they started; House Judiciary Committee Chair Jerry Nadler has publicly come out for an inquiry, and Rep. Ben Ray Luján, the No. 4 Democrat in House leadership, also recently came out in support. On top of that, there’s also independent Rep. Justin Amash, who recently left the Republican Party. CNN’s tally, though, is just under half — it counts 124 Democrats supporting an inquiry.

The counts are slightly different because Politico’s includes two members who have said they actually prefer not to move ahead on impeachment right now — Reps. Frank Pallone (D-NJ) and Karen Bass (D-CA) — but who have also suggested that if they were asked to vote on an impeachment inquiry, they would vote yes.

Bass has said she doesn’t think it’s “the time” to impeach Trump but would personally like to see him removed from office “immediately.” Pallone, meanwhile, has said he thinks impeachment will be a “waste of time” because it will go “nowhere” in the Senate — but, since he thinks Trump is a “racist” who “obstructed justice,” he’d vote yes anyway.

In any case, it’s clear that about half the House Democratic caucus now supports opening an impeachment inquiry at this point.

Now, supporting an impeachment inquiry does not necessarily mean that these members of Congress would vote to impeach Trump (though many of them would). They support an inquiry on the topic. It’s proven a popular position because it sounds like an open-minded effort to get more facts, without committing to a final decision.

Supporters of an impeachment inquiry are still being met with resistance from House Speaker Nancy Pelosi. She’s offered a variety of different reasons for her opposition to the move. But she likely believes (as most do) that there’s zero chance the Senate will remove Trump from office, and therefore fears a controversial impeachment vote would harm House Democrats representing districts that voted for Trump — something that could put her majority at risk.

Currently, the House is in the midst of a lengthy recess. Members are back in their home districts and set to return to Washington in September. So watch the various Democratic members who aren’t yet on board with an inquiry — what they hear from their constituents when they’re back home this August could make an impact.

Can a college course in moral philosophy convince people to eat less meat?
An Ebola “perfect storm” is brewing in the Democratic Republic of the Congo
The bizarre media hoopla over Alan Dershowitz’s social life in Martha’s Vineyard, explained
Trump’s far-fetched legal campaign to question the election seems to be falling apart
Congress just made moves to narrowly avert another government shutdown
Trump has no clue how to strike a deal with Dems. His State of the Union speech proved it.