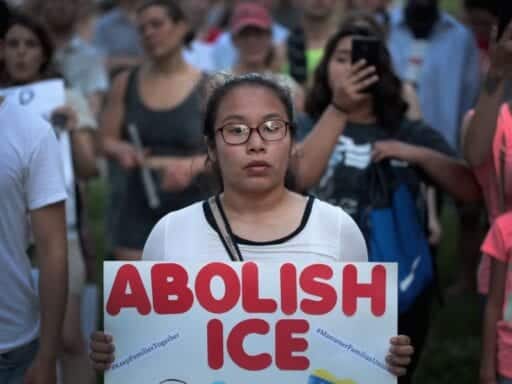 But a plurality of Democrats is in favor of it.

“Abolish ICE” has become an increasingly prominent Democratic rallying cry, but a new poll finds that most Americans are still opposed to the idea. According to a recent survey by Morning Consult/Politico, 54 percent of the Americans surveyed support the preservation of the US Immigration and Customs Enforcement (ICE), although a plurality of Democrats favor abolishing it.

When the poll results are broken down by party, the discrepancy is pretty stark: Forty-three percent of the Democrats surveyed said they would support the federal government’s dismantling of ICE, while 79 percent of the Republican respondents said they were against it. Fifty-four percent of the independents polled also voiced support for keeping ICE.

As Vox’s Dara Lind wrote, “Abolish ICE” has emerged as a “catchall rallying cry” as outrage toward the Trump administration’s draconian immigration policies — including family separations — continues to build. ICE is tasked with identifying, detaining, and deporting people in the US who have violated immigration law.

What began as a seemingly lefty, progressive policy platform — one that’s been vigorously touted by Democratic socialist Alexandria Ocasio-Cortez — is being adopted by more and more Democrats including Sen. Kirsten Gillibrand, someone long thought to be a potential 2020 presidential contender.

I believe we need to protect families who need help, and ICE isn’t doing that. It has become a deportation force. We need to separate immigration issues from criminal justice. We need to abolish ICE, start over and build something that actually works. https://t.co/JtSN68k4Fd

As the idea of taking down the agency has gained momentum, the proposal has posed a challenge to members of the Democratic establishment who have shied away from wholeheartedly embracing it. This issue marks yet another tension between progressives and establishment Democrats that could ultimately force a reckoning within the party about how it wants to frame its policies on immigration, Lind wrote.

The proposal also raises questions of how ICE would be replaced if it were, in fact, eliminated.

President Donald Trump has sought to make immigration a cornerstone of his midterm election campaign message — although a number of polls suggest that it’s really more of a wildcard issue, with many voters disapproving of how he’s handled immigration policy.

In mobilizing around the “Abolish ICE” tagline, Democrats are, in effect, using Trump’s own methods against him. Much like Trump’s “build a wall” campaign rhetoric, “Abolish ICE” offers voters a powerful and partly symbolic ideal to latch onto, wrote Vox’s Matt Yglesias.

What remains to be seen is whether this idea is something that Democrats will ultimately be able to put into practice.

Some autistic people find comfort in specific objects. What happens when they’re not available anymo...
If anti-Bernie Democrats were serious, they’d unite around Joe Biden right now
Why Spain is having yet another election
Big Little Lies season 2, episode 2: “Tell-Tale Hearts” asks if families can survive their own secre...
Did Jimmy Fallon just jump on the 'rage giving' train?
Uber Eats doesn’t plan on eating its competition — for now

The backlash against In the Heights, explained

Lina Khan will be chair of the Federal Trade Commission