Most cancer drugs fail in testing. This might be a big reason why. 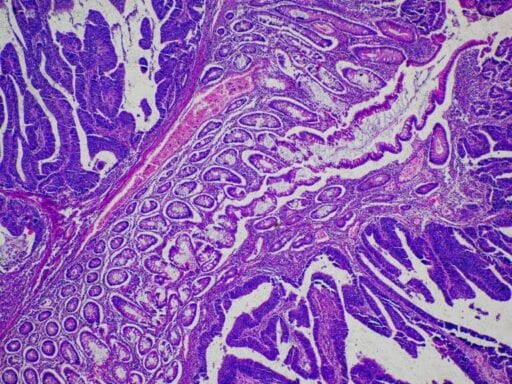 Share
Loading...
97 percent of the time that a new drug is tested in a clinical trial for a particular type of cancer, it never makes it to the market. | Getty Images

Some therapies might not be hitting the targets they’re supposed to.

In the quest for the next cancer cure, few researchers bother to look back at the graveyard of failed medicines to figure out what went wrong.

The number of failures is staggering: 97 percent of the time that a new drug is tested in a clinical trial for a particular type of cancer, it never makes it to the market. That means the humans (and animals) who participate in these experiments risk their lives on treatments that end up in the dustbin.

Now, a new study helps explain why the rate of failure is so high: In the case of targeted cancer therapies — a relatively new class of oncology drugs — the medicines may not actually hit the targets researchers intended.

Targeted therapies in cancer work differently from traditional treatments, like chemotherapy. They’re supposed to be aimed at the specific genes, proteins, or tissues cancer cells rely on to thrive. (Chemo, on the other hand, generally works on all cells that are rapidly dividing, regardless of whether they’re healthy or cancerous.)

The new study, published in Science Translational Medicine, used CRISPR — the latest and most precise gene-editing tool available — to examine whether 10 different drugs worked as researchers projected. In every case, the researchers found that they didn’t.

When the paper’s authors removed the genes from the genomes of cancer cells that were supposed to be essential for cancer growth, the cells continued to grow. And when they applied the medicines — each targeting one of six genes — to the newly removed genes, the drugs killed the cancer cells anyway. In other words, even when the supposed target of the therapies was fully deleted, the drugs worked.

This suggests it’s possible that a big driver of cancer-drug failures in clinical studies is that the drugs don’t actually work as drug developers intended.

“I hope this paper will help people see the need to raise to bar in terms of how we choose and validate cancer drug targets,” said William George Kaelin, a Harvard University professor of medicine who was not involved in the study.

The study should also be a wake-up call for drug developers: “[They] should make sure their drugs stop working if the target protein has been genetically removed,” said Nathanael Gray, a Dana-Farber Cancer Institute cancer biologist, who was also independent of the research.

The finding is definitely fascinating. But so is the story of why the researchers decided to run the study in the first place and use the latest gene-editing technology to reanalyze, and possibly debunk, previous findings in cancer clinical studies.

A few years ago, one of the paper’s authors — Jason Sheltzer, a research fellow in cancer biology at Cold Spring Harbor Laboratory — and his colleagues became interested in a gene called MELK, which is supposed to serve as a biomarker for aggressive breast cancer in patients with a poor prognosis. In the US, some 270,000 new cases of invasive breast cancer will be diagnosed in 2019, and nearly 42,000 women are likely to die from the disease, according to the American Cancer Society.

The researchers started to tinker with the gene using CRISPR and found they couldn’t reproduce many of the previous findings about MELK that had been uncovered using older gene-analyzing technologies, such as RNA interference. Namely, even when MELK was cut out, the breast cancer cells proliferated.

When a drug that was supposed to target MELK for breast cancer entered clinical studies, the researchers decided to use CRISPR again, this time to edit out the gene to see whether the drug still worked. “We found the drug continued to kill breast cancer cells,” regardless of whether the MELK it was targeting was present in the breast cancer genome, said Sheltzer.

This led Sheltzer and his colleagues to a big question: Had they just studied “a uniquely bad cancer drug or did we stumble upon a bigger problem?” he recalled. “The extremely high failure rate [in cancer clinical trials] made us suspect there might be other instances of poorly designed drugs and poorly researched drug targets being tested in human patients.”

Enter the new study. Sheltzer and his co-authors chose 10 drugs and drug targets that, like MELK, were at various stages of clinical development. They focused mainly on targets that had been discovered using RNA interference, again, a once-popular gene-analyzing technology that predated CRISPR. And they suspected that — like MELK — maybe it’d been leading researchers down the wrong path.

In each case, they used CRISPR to cut out genes from the genomes of the cancer cells they were looking at — genes thought to be essential for cancer growth. And they found that in every case, the drugs killed the cancer cells even though the gene that was supposed to be driving the cancer had been removed.

“We wound up with 10 drugs that are potent anti-cancer agents. So we think that if we can figure out what these drugs actually do, we might be able to discover new cancer targets or we might be able to find patients who are more likely to respond,” Sheltzer said.

It’s also possible this kind of mistaken target helps explain why drugs fall short as they make their way through more and more rigorous stages of clinical studies.

But there could also be other explanations for the misfired targets. Sheltzer acknowledged that they chose medicines primarily discovered with RNA interference technology. And, “Technology is always improving. So a lot of the drugs that are being tested in patients now were discovered and characterized five to 10 years ago.” It’s possible that targeted therapies, discovered more recently using newer genetic technologies, are more precise.

Both Kaelin and Gray shared a word of caution about the study: The researchers focused on targeted drugs that were already known to be problematic. As Kaelin put it, “[They] picked drugs against targets where there was never, in my opinion, strong genetic data to support them.” So, perhaps, cancer drugs with better-established targets would work as projected.

But Sheltzer says honing in on poor performers was part of the point of the study. “A lot of cancer drugs get into clinical trials based on very weak genetic evidence, and when you carefully evaluate them, the rationale for targeting particular genes evaporates.”

Either way, he and his colleagues hope the research inspires more analyses into why so many cancer drugs don’t help patients. “Research funding agencies are very interested in finding the next cure,” Sheltzer argued, “and they aren’t excited about this research into reproducibility and why some drugs fail.” If we want to accelerate the quest for effective, new treatments, maybe they should be.

Have smartphones really destroyed a generation? We don’t know.
This conversation explains a vital reason Trump is so popular on the right
Why labeling Yemen’s Houthis as terrorists could hurt millions of people
More than 20 Democratic House candidates want Nancy Pelosi to step aside after 2018
Welcome to the world of craft weed
Watchmen episode 8 has an Adrian Veidt-centric post-credits scene. It’s bonkers.