Most Democratic voters still haven’t settled on a candidate 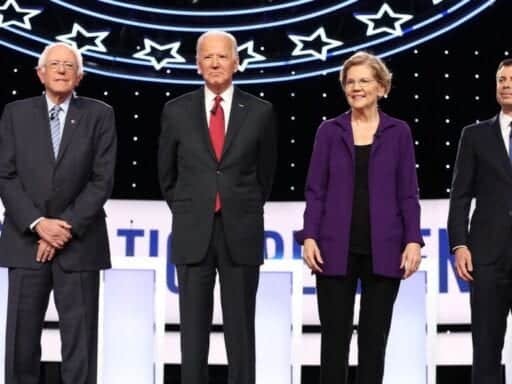 According to three new 2020 polls, the majority of Democratic voters think they might vote for someone other than their current favorite.

With roughly a month and a half to go until the 2020 Iowa caucuses, just under two months until the New Hampshire primary, and about three and a half months until Super Tuesday, Democratic voters have little idea who they want as their nominee, according to three new national polls.

Mid-December national polls from NPR/PBS NewsHour/Marist, Quinnipiac University, and USA Today/Suffolk University show that most Democratic voters have a candidate they are considering, but have yet to actually make up their minds. That suggests the ranking of the candidates — which has remained fairly consistent in recent weeks — could be shaken up in the new year.

These national numbers underscore a reality that has existed for the duration of the race. While the field has seen individual candidates’ polling spike and decline, Biden and Sanders — the two men who entered the race with the highest name recognition and the most distinct bases of support — have maintained their spots atop the field in a remarkable fashion.

Biden led the field in national polls even before declaring his candidacy, and has kept this position throughout the contest. Similarly, Sanders has almost always been second — barring a brief stretch in the fall during which Warren captured that spot.

It’s worth remembering that polling in the first few states to vote — Iowa, New Hampshire, Nevada, and South Carolina, in that order — arguably tells us more about who will win the nomination, but even that’s contingent on voters having made up their minds. And based on this latest round of national polls, most people haven’t.

It’s still early — but very soon it won’t be

As with any big decision, it is normal for voters to mull who they want to cast their ballots for, and certain voters — perhaps most famously those in New Hampshire — have historically prided themselves on deciding on a candidate at the last possible moment.

But with that said, new Marist College, Quinnipiac University, and Suffolk University polls didn’t just find that New Hampshire voters aren’t sure who they want to vote for at the ballot box — they found that the majority of voters are, all across the country. And that is striking.

Pollsters at Marist College found that 76 percents of Democrats have not definitively decided who they will vote for (24 percent said they have settled with certainty on a candidate).

Perhaps, unsurprisingly, given that number, the uncertainty Marist pollsters found crossed every demographic — whether respondents were a minority, or college educated, or a woman, or a city dweller, they did not know who they wanted to vote for. Men (of all backgrounds) living in small cities and suburban areas were most married to candidates — and still, only 33 percent said they knew, for sure, who they wanted as the nominee. The most undecided subgroup Marist tracked was moderates (of all backgrounds); only 19 percent said they have settled on a candidate.

Quinnipiac pollsters found results nearly as dramatic: 61 percent of respondents said they might change their minds ahead of their primaries and caucuses, and 38 percent said they’d made up their minds.

But Suffolk’s pollsters also found the greatest number of completely undecided voters. All three organizations asked who respondents would vote for — or lean toward — at present: Marist pollsters found that five percent did not know; 10 percent of Quinnipiac respondents said they did not know (or did not answer); but nearly one in four (24.74 percent) of respondents told Suffolk pollsters they had no idea who they would consider supporting.

There would seem to be some historical precedent for voter uncertainty at this point in the race, albeit not quite at this level. In December 2015 — granted, when Democratic voters had a much narrower field to choose from, and at a time when Hillary Clinton was far better known than Sanders — Quinnipiac asked respondents if they’d made their minds up. Most had: 57 percent said they were fully behind their candidate, and 41 percent said they could change.

Marist College and Suffolk University did not ask about voter uncertainty directly in December 2015, but a national poll from Suffolk did find that 11.29 percent of respondents did not have a candidate they were leaning toward.

Overall, it is still a bit early in the primary race, but we are quickly approaching the point when it will no longer be early. There are a number of reasons voters may have not yet selected a candidate, but Quinnipiac’s polling suggests it is not for a lack of attention: It found that most Democratic voters — 59 percent — are paying “a lot” of attention to the race. And 23 percent said they were paying at least “some” attention.

This level of attention, coupled with the degree of uncertainty these polls recorded, would seem to offer an opportunity for upward mobility among candidates. The polling does suggest one thing currently stands in the way of a win by Warren or Buttigieg, however: the solidity of Biden and Sanders’s support.

Biden and Sanders have enjoyed an incredibly consistent level of support

While the December 2015 and 2019 Quinnipiac polls tell somewhat different stories about the decisiveness of Democratic voters, one thing they both illustrate is the staunch support enjoyed by Sanders; in 2015, 55 percent of his supporters said they were sure to vote for him, and in 2019, 49 percent said the same.

Only one other candidate currently has similarly solid levels of support: 48 percent of Biden backers told Quinnipiac he has them locked down.

In a way, these numbers reflect the national 2020 Democratic race so far: Warren, Buttigieg and Sen. Kamala Harris (who’s since dropped out) have seen surges, only to see that support slip away, to varying degrees; meanwhile, Biden and Sanders have been steady. In FiveThirtyEight’s national polling average, Biden’s support since August can be seen as a fairly straight line — and the same has been true of Sanders since mid-May (although it does register a slight uptick in the senator’s support in recent weeks).

The few December polls from the earliest states largely mirror these long-standing national trends. Biden and Sanders were first and second, respectively, in a December Iowa poll conducted by Emerson College and a South Carolina poll by Change Research; and while a WBUR/MassInc poll of New Hampshire found Buttigieg topping the field, his lead over even the lowest of the top four candidates, Warren, was within the margin of error.

Neither septuagenarian man has suffered in polling following crises that some believed could hurt them. Sanders faced a health scare in October — a heart attack. Some felt this could raise concerns about his age and physical fitness, leading to an erosion of support. But no such thing happened.

And Biden is linked to impeachment — not because he himself did anything wrong, but because President Donald Trump and his allies claim he and his son did. This led to concern that consistent attacks on Biden’s credibility and moral fitness would harm him. Again, at least as far as the numbers are concerned, there seems to have been no harm done.

The latest Quinnipiac poll would suggest that this resilience is thanks to a dedicated band of supporters who have chosen each candidate, and who have committed to sticking with him until the end.

Both — as Hillary Clinton did in 2016 — have the advantage of being known quantities when they announced their candidacies. For instance, in April, a Monmouth University poll found that only one percent of respondents didn’t know who Biden and Sanders were. The same poll found that 13 percent didn’t know Warren, and 34 percent had never heard of Buttigieg. Coming into the race with that level of name recognition meant both had an instant base of support, and that voters had less work to do to make up their minds about whether to back them.

And they have solidified that base by being careful to stick to their established personas: Biden as the gaffe-prone, folksy political veteran who is “electable,” and Sanders as the democratic socialist firebrand who wants to take on “the millionaires and the billionaires” while starting a political revolution. Essentially, voters knew who they were, either liked it or didn’t, and are still getting exactly what they expected from both.

Now, as the candidates enter the primary’s final stretch, Sanders and Biden will need to find ways to build on that base while sustaining their momentum, lest all those undecided voters out there decide they like a fresher-faced candidate better — be it Warren, Buttigieg, or even someone like Sen. Cory Booker.

Bill Barr tried to fire the US Attorney for Manhattan. He refused to step down.
An ode to Adventure Time, one of TV’s most ambitious — and adventurous — shows
The Trump administration misspelled “separation” in an executive order on family separation
The Trump-Ukraine scandal, explained in one minute
France produces the most World Cup players. Here’s why.
Read Ford’s written testimony: “I am here today not because I want to be. I am terrified.”