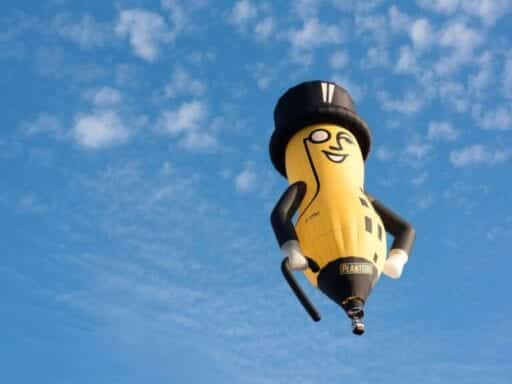 Bartholomew Richard Fitzgerald-Smythe is dead at 104. But now there’s a Baby Nut.

Mr. Peanut is dead. The monocle-wearing mascot of the snack food company Planters was announced deceased by the official Mr. Peanut Twitter account on January 22, at the age of 104, even though technically he should have died more than a century ago because peanuts, which are not sentient, go bad after about four months.

Yes, it is confusing for an anthropomorphized peanut to die. It also looks quite obviously like a stunt to sell more Planters peanuts, though it’s a potentially flawed marketing strategy, as Mr. Peanut is arguably more famous than Planters itself.

Naturally, it’s all tied to the Super Bowl. Mr. Peanut’s death aired in a commercial before the game, which was followed by a funeral in a second commercial later on. The twist: The funeral, which was attended by both Mr. Clean and the Kool-Aid Man, was also the start of a new beginning for peanuts in top hats. On the mound where Mr. Peanut was buried, a new plant sprouted, and out came — what else — a baby Mr. Peanut. (Baby versions of adult characters have been a major trend this decade, it appears. There is also a hashtag: #BabyNut.)

Planters also made news last week after the sudden death of NBA legend Kobe Bryant and his 13-year-old daughter Gianna on January 26, however, Planters announced that it paused its campaign on social media. In a statement to Ad Age, a Planters spokesperson said, “We are saddened by this weekend’s news and Planters has paused all campaign activities, including paid media, and will evaluate next steps through a lens of sensitivity to those impacted by this tragedy.”

How did Mr. Peanut die?

On January 22, the Mr. Peanut Twitter account tweeted that Mr. Peanut “sacrificed himself to save his friends when they needed him the most,” and requested that followers pay their respects to the anthropomorphic peanut, whose real name, according to Google, is Bartholomew Richard Fitzgerald-Smythe. He was reportedly invented in 1916 by a 10-year-old boy named Anthony Gentile, who submitted a drawing of a smiling peanut with arms and legs to a trademark contest. Did you know that, canonically, Mr. Peanut is British, even though the only two celebrities to have voiced him in commercials have been Americans Robert Downey Jr. in 2010 and Bill Hader in 2013? I did not!

It is with heavy hearts that we confirm that Mr. Peanut has died at 104. In the ultimate selfless act, he sacrificed himself to save his friends when they needed him most. Please pay your respects with #RIPeanut pic.twitter.com/VFnEFod4Zp

The full story of Mr. Peanut’s death was told in a commercial produced by RadicalMedia and Vayner Media that aired before the Super Bowl. Mr. Peanut is in a peanut-shaped car with Veep’s Matt Walsh and Wesley Snipes, for some reason. They swerve to avoid an armadillo and end up going over a cliff, and the three passengers — Walsh, Snipes, and Mr. Peanut — are left hanging on a stray branch that’s too heavy for all three of them, so Mr. Peanut lets go and falls to his death.

What is the point of this?

Why would a brand murder a mascot who is arguably more famous than the company itself? Like all marketing campaigns, this stunt is intended to get people to talk about it, which we are doing right now. However, it is questionable whether Mr. Peanut was really all that beloved, considering he is also a ruthless capitalist and at least one person on the internet wanted him dead.

is there anything more capitalist than a peanut with a top hat, cane, and monocle selling you other peanuts to eat

Mr. Peanut is not the first mascot to die, at least temporarily; General Mills briefly replaced the cartoon Trix bunny with a real bunny to promote its new all-natural ingredients. It later also replaced the Honey Nut Cheerios bee with a blank silhouette on its boxes as an awareness campaign for the declining bee population. Last year, the dating app Hinge released a campaign in which the fuzzy, googly-eyed version of its logo is both burned in a bonfire and crushed by a falling air conditioner (because they want you to get off the app, get it?).

In Planters’ case, though, it’s possible there is no reason at all that it decided to murder Mr. Peanut. That’s because brands doing nonsensical things is what brands have done ever since they discovered Twitter.

About 10 years ago, companies like Taco Bell, Denny’s, and Hamburger Helper co-opted the uniquely weird and surreal voice of alt-comedy Twitter and ushered in a decade of official brand accounts calling each other virgins. During the government shutdown of 2019, Potbelly sandwiches asked when it could “call dibs on tanks and stuff.” Sunny D tweeted, “I can’t do this anymore.” An aquarium had to apologize for using the word “thicc” to describe an otter. Vita Coco threatened to send a bottle of one of its employees’ urine to an online troll.

By now, the weirdness we expect from Brand Twitter has transcended the platform and is a part of wider marketing campaigns, so that when Planters announces Mr. Peanut died saving Matt Walsh and Wesley Snipes, there is little to be done besides just nod and sigh. This is what brands do now. Mr. Clean has sent his condolences, and there is an official hashtag, #RIPeanut. Now that Mr. Peanut’s successor has been revealed as #BabyNut, it’s likely that even more weirdness will follow.