Mr. Robot wraps up with a near-perfect final season about our need to connect 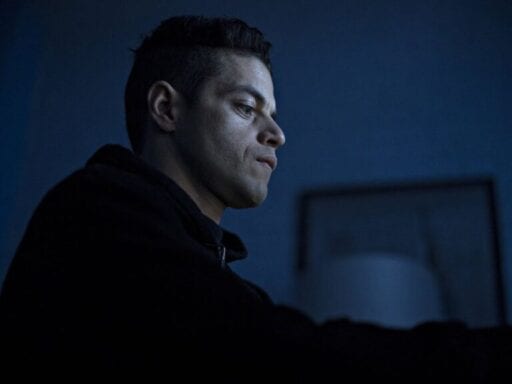 The hacker drama used to be chilly. It went for sentiment in its last stretch of episodes — and succeeded wildly.

The core of any television series is the two-person scene.

Early in its run, USA’s hacker drama/anti-capitalist manifesto Mr. Robot might have seemed to find a way around this maxim of mine. Though the show had plenty of two-person scenes, they were kind of, sort of, technically one-person scenes, because the two people talking (superhero hacker Elliot Alderson, played by Rami Malek, and the mysterious Mr. Robot, played by Christian Slater) were so often just two pieces of Elliot’s shattered personality. And in the show’s first season, Elliot was so detached from his reality that the other characters on the show often seemed to be ciphers, unapproachable and opaque.

The conventional wisdom holds that Mr. Robot was a twist-driven show that fell apart after season one because at the end of that season it had deployed its two biggest twists (Mr. Robot and Elliot are the same person; the cool hacker girl Darlene, played by Carly Chaikin, is Elliot’s sister and not his love interest, and Elliot somehow forgot who she was). But I have always been cheering this show on, even in the dark days of its too-long, too-convoluted second season. Mr. Robot’s fourth and final season has rewarded my faith. It’s the best season the show produced and a stinging rebuke to the conventional wisdom around the show.

Mr. Robot, see, has always been about two-person scenes, about the tentative connections formed when two people sit down, no barriers between them, and just talk about what they want. And it might have sneakily been the TV drama that best showed us what the 2010s were all about.

Mr. Robot’s fourth season drew connections between characters all across its web

The final season of Mr. Robot was the show’s longest — 13 episodes, compared to season two’s second-longest run of 12 — and also the season with the highest stakes. The characters not only have to literally save the world by throwing off the shackles of its oppressors (the top 1 percent of the 1 percent), but they also have to find the time to redistribute that wealth back to the people it’s been taken from.

Mr. Robot and its creator Sam Esmail are probably a little too mushy and sentimental to create the kind of hard-nosed Marxist tale that leftier TV fans might like, but this final season is about as close as American television has gotten to forthrightly advocating for the end of capitalism. The series began quite obviously as a Fight Club riff, but it’s always been interested in the world the characters live in after the end of that film, when they try to dismantle capitalist, consumerist society by blowing up some buildings. On Mr. Robot, simply tearing down the system isn’t enough. You have to find a way to replace it. Destruction is hard; construction is harder.

The final season tackled head-on the question of how to replace our current system. It certainly had its thrilling sequences — a largely dialogue-free episode, for instance, saw one of the series’ most exciting computer hacks — but so, so much of the action unspooled as a series of two-person scenes in which characters who hadn’t really connected over the previous three seasons finally sat down and talked honestly, vulnerably, and emotionally with each other.

In a gut-wrenching episode halfway through the season, Elliot’s therapist Krista (Gloria Reuben) even guided Elliot down to the core of his trauma to help him realize that the events that precipitated his split into multiple personalities were touched off by his own father molesting him. And throughout the season, Elliot and Darlene’s bond deepened. The two clearly cared about each other, but the shared trauma of growing up with two abusive parents (their mother was emotionally abusive) often placed them at odds. Yet the final season kept drawing them back together.

The season’s structure ingeniously let characters fall away from the central story as their own arcs resolved. Some — like CEO wannabe Tyrell Wellick (Martin Wallström) — reached the end of their story in death. Others, like hard-charging FBI agent (and Darlene love interest) Dom (Grace Gummer), received happier endings but still mostly left the series when their stories were resolved. Thus, the season drilled down ever closer to the Elliot and Darlene bond at Mr. Robot’s center.

And within each of these storylines, the season centered on scenes between two people just talking. They would try to find a middle ground or realize how deeply their differences divided them or spit daggers at each other. But they talked, often at length. (Some of these conversation scenes topped 10 minutes.) Knowing that the show had begun with a reputation as emotionally chilly, technically audacious, and built around twists, it was a little disconcerting to realize just how thoroughly this final season — set largely over the holiday season — had come to center on naked emotionality.

The conversations weren’t always about the main plot, either. Darlene and Dom talked about a possible future together in an airport bar. Elliot and Krista tried to figure out what might be next for their therapy together after his major revelation. A father tried to protect his daughter from doing something stupid, even as he knew she would do precisely that because she was his daughter. The season kept paring down to two people talking to each other, trying to resolve their relationship, at least for the time being.

If capitalism tries to convince us that what is most important is what any one of us can acquire or accomplish, then whatever takes capitalism’s place will have to be built around collective action. Yet collective action is no good if it’s not also built around person-to-person contact. The world seeks to build walls between us, and the only way we can climb them is by tossing each other rope.

The 2010s often felt like a bracing reminder of this idea, one that we arrived at in both physical and digital spaces. And of all the shows on TV, Mr. Robot seemed most attuned to how hard it was to overcome all of the machinery keeping us apart — but also how necessary.

And now we’re going to have spoilers for the series finale, so stop reading if you’d rather not know what happens.

The Mr. Robot series finale extended this idea of connection to a connection within the self

There was always going to be a big twist in the Mr. Robot series finale, but what I didn’t expect was that it would be that the show’s protagonist wasn’t quite who we thought he was. In an intriguing take on the “the hero has to die so others can live” trope, the show’s finale posits that the Elliot we’ve been watching all this time is a splinter personality of the real Elliot — just like Mr. Robot.

This Elliot — dubbed “the Mastermind” — was constructed as a way to help Elliot hack the world and right wrongs. But he eventually took over the body the two shared and confined the “real” Elliot to some sort of subterranean alternate universe, where everything was happy and many of the people Elliot loved were still alive instead of dead (or, in the case of his father, still alive and not a horrible monster).

This character reveal risks pissing off the audience when they learn that the person they’ve invested in over four seasons isn’t “real” on some level. I’d argue the finale does an excellent job of explaining that the Mastermind is very much real on his own, but also that his usefulness to Elliot has come to an end.

Sometimes, our brains deal with pain by putting up partitions. And sometimes, those partitions take on personalities of their own. That doesn’t make them less real; it makes them parts of ourselves that have to be reintegrated. The real Elliot has to live his life, and thus, he has to blend his other personas — the Mastermind and Mr. Robot among them — back into his core self, something he accomplishes by series’ end. Reintegration, too, is a kind of connection.

One of the lies we might come to believe is that we are only as useful as our output, as the material wealth we can generate in the world. So many systems we are a part of dehumanize and grind us down, even if they sometimes pretend to be ashamed of that fact, and what we do too often matters more than who we are.

The finale of Mr. Robot finds a way for both of these things to matter alongside each other. Elliot did something grand in finding a way to rewrite the world via a little computer crime. But in the process, he was also forced to question the reasons he was the person he was. He wasn’t a program or a system of if/then loops designed to run flawlessly. He had real pain to deal with, and also real joy waiting for him out in the world.

When the series ends not with buildings crumbling or the world ending but, instead, with Darlene’s face as she once again sees the brother she somehow knows she hasn’t seen in ages, it’s as moving as any TV ending of the decade. We are not just what we do. We are also thinking, feeling beings, with a capacity for so much love. The world wants you to forget that. But sometimes a reminder pops up in the most unexpected place, a flower growing in the cracks of the asphalt, reminding us of what is possible, not just what is.

The first three seasons of Mr. Robot are on Amazon Prime Video. The final season will join them in the new year and is currently available on USA’s website.

The disturbing history of tear gas as the weapon of choice against protesters
12 senators on what message Brett Kavanaugh’s confirmation sends to America’s women
CEOs may promise to be ethical, but most of them do the bare minimum, says The Enlightened Capitalis...
Joe Biden explains why he’d defy a subpoena to testify in the Senate impeachment trial
Did the coronavirus get more deadly? The death rate, explained
What MLK and Malcolm X would do today