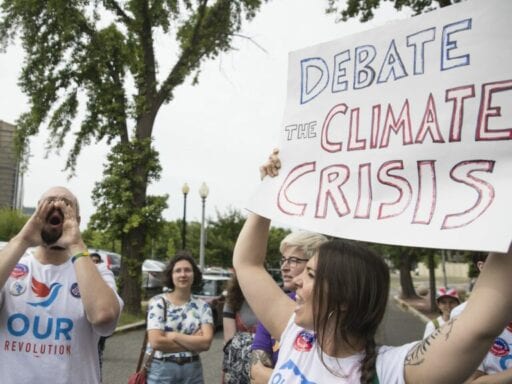 The two-day event begins on September 19.

Many of the top Democratic presidential candidates took part in a seven-hour climate change forum Wednesday, but they’re not done talking about it on a nationally televised stage.

Although the Democratic National Committee decided against hosting a single-issue debate about climate change, the issue — which is one of voters’ top concerns — will be the subject of another independent town hall in roughly two weeks.

Wednesday’s summit was hosted by CNN; on September 19 and 20, MSNBC will air its own climate town hall beginning at 3 pm ET each day. The event, which is cosponsored by the Georgetown Institute of Politics and Public Service, Our Daily Planet, and New York Magazine, will feature some of the candidates excluded from Wednesday’s town hall. While CNN limited its invites to candidates at the top of polls, MSNBC will allow all candidates — even Republican presidential candidates — to take its stage.

At the moment, the following candidates are confirmed to appear:

The candidates will field questions from moderators Chris Hayes and Ali Velshi, both MSNBC hosts, as well as the audience, which will be made up of college students from the Washington, DC, area and from early primary states like South Carolina. Those not in attendance will be able to watch on MSNBC, Telemundo, and NBC News Now.

CNN and MSNBC’s climate town halls came about in response to the DNC’s reluctance to hold a single-issue debate completely focused on the matter. DNC officials, including Chair Tom Perez, repeatedly argued that climate change, while important, did not warrant its own night of debate, and that such a debate would unfairly advantage climate-change focused candidates like Gov. Jay Inslee (who has now dropped out of the presidential race).

Activists, and many Democratic candidates, pushed the DNC to host a climate debate anyway. It refused to do so, voting against the idea officially in August. The committee’s rules, however, allow candidates to take part in non-DNC sanctioned discussions as long as they are not onstage together engaged in back-and-forth. Taking advantage of this, CNN and MSNBC scheduled climate town halls that feature candidates speaking one at a time.

Most of the candidates scheduled to appear have developed their own climate change plans, a number of which were released in the days ahead of the CNN debate. While Republican Bill Weld does not, he has said climate change is one of the reasons he is primarying President Donald Trump, and he told Vox’s Jane Coaston he is particularly concerned with rising ocean levels.

Some of the Democratic candidates, including Sanders, Buttigieg, and Booker, will have a chance to further discuss their climate change plans at the third Democratic debate on September 12. However, the televised debates don’t always give candidates the best platform on which to detail their ideas; as Vox’s Umair Irfan has noted, “in the prior two rounds of presidential debates spanning more than eight hours, climate change received just 35 minutes of airtime.”

The next climate town hall, then, will give candidates — especially those not invited to the third debate, like Williamson and Ryan — their last chance for some time to directly address national voters and lay out clear, succinct visions for fighting climate change without any interruptions. Vox has laid out 10 questions moderators could ask to make that happen.

Stanley Tucci’s bookshelf is too messy, says celebrity book curator Thatcher Wine
Instagram’s answer to TikTok is here
Andrew Cuomo has won himself another term, but his presidential aspirations are dead
The hugely influential — and complicated — California primary, explained
The next Democratic debate could feature a much smaller stage
For 24 hours, watch amazing actors perform on Instagram