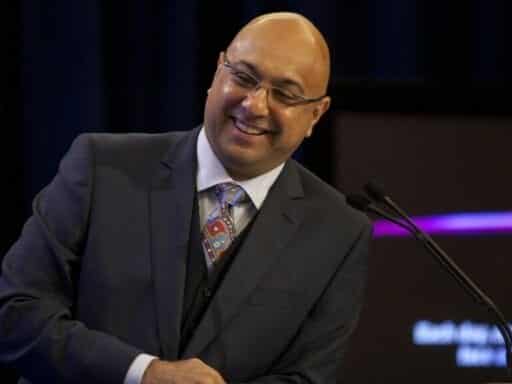 MSNBC and CNN are pushing candidates on climate change where the Democratic party is not.

MSNBC is hosting a televised climate change forum this week with 12 candidates running for president in 2020. The event is split across September 19 and September 20 and will cap the network’s “Climate in Crisis” series, a week of dedicated programming on climate change. MSNBC hosts Ali Velshi and Chris Hayes will be questioning the contenders and fielding questions from young voters in the audience.

The forum will be held at Georgetown University and is also sponsored by Our Daily Planet and New York magazine. It comes after CNN held an unprecedented seven-hour climate change town hall with 2020 Democratic presidential contenders earlier this month.

Climate change is receiving a lot more attention in this election cycle than it has in previous campaigns. But that’s not saying much. It received just minutes of superficial discussion across 7.5 hours of airtime in the first three debates.

MSNBC and CNN decided that climate change warranted dedicated televised events, so I wanted to learn why they thought the issue deserves so much attention. I also wanted to understand what it takes to have a substantive discussion on climate change on television that pushes candidates beyond platitudes. So I reached out to MSNBC’s Velshi and caught him last week just after he’d returned from the Bahamas where he was reporting on Hurricane Dorian.

“It’s new territory for us to get into this kind of specificity on climate change,” Velshi told me.

Here’s our conversation, edited for length and clarity.

Your co-host Chris Hayes once described climate change as a ratings killer. The recently wrapped CNN town hall finished last in ratings among cable news networks. My question is, for a TV network, what’s in it for you? Why do this town hall on climate change?

For our children! This is an imperative. It’s hard for people to get their head around the stuff that Washington Gov. Jay Inslee [the former presidential candidate who released an extensive six-part climate plan] was saying, that for all your talk about health care and national defense, this is the thing that matters the most. If climate change continues at the pace that it’s at, none of your grand plans for any thing else will matter.

Jay Inslee was right, and that’s the context in which we have to reorganize our thinking about all of these other matters.

I’m a health care guy. I’ve thought for a long time that that’s the No. 1 thing we have to solve. But ultimately this has become imperative No. 1 because of the pace of climate change. And No. 2, because there’s a fundamental misunderstanding about what our responsibilities are around it. This isn’t about plastic straws … This is about massive moonshot style, technological advances and industrial change. And that requires government.

So you’re doing this as a public service?

I think it’s got to do with what I often say are the two basic callings of journalism: Bearing witness and holding power to account. Putting ratings aside, we are journalists. And if we don’t do the basic things that journalism is meant to do, then we’re not taking our responsibility seriously.

So bearing witness, which is what we do when we report on the facts of climate change, but also fires and droughts and flooding and hurricanes, and embedding climate discussions into those pieces of coverage. And then holding power to account: How’d we get to where we are now and who is responsible for leading the charge to fixing it? That’s just journalistic work at this point.

Climate change got more airtime during the official Democratic National Committee debates than just about ever before in a presidential campaign, but it seemed the discussion was still lacking. Do you think this format of a town hall can compensate for the shortcomings of the debate format?

I think you’re right to use the word “compensate.” Climate is not central to a lot of these debates, but you know, I’m an issues wonk, as is Chris Hayes. A lot of the things that we like to talk about don’t really succeed in that debate format. The format we’re using is a forum where we have specific half-hour conversations with these candidates and then they talk to students.

The idea is that we’re focusing the candidates around a particular topic, albeit a remarkably broad topic. That is going to help Americans understand A) how seriously these candidates take climate change and B) how they plan to sell that to people who are going to have to make some sacrifices in order to see us do the right thing around climate. It’s not going to be free and it’s not going to be cheap. Who pays for it? And how do you convince people that it has to be paid for?

I think, by the way, that applies to a lot of these complicated topics, including national security and immigration and health care. So I’m glad that we’re doing it this way.

Can you weigh in on the CNN town hall? Did you learn any lessons you intend to apply to your event?

I have been covering the hurricanes for the last couple of weeks. So believe it or not, I have not watched it. I’m so pleased that CNN did it. I’m sure we’ve got some lessons to learn. But to me, the more the merrier. This is not something that we should be exclusive about.

Have you finalized the questions you want to ask?

I’ve certainly got more than enough of the questions that I want to ask. But the challenge is, what does a half-an-hour a narrative arc look like for each of these candidates? Because some of them are in different places on the topic, so it can’t be the same discussion for all of them.

I noticed that former Massachusetts Gov. Bill Weld, a Republican who is mounting a primary challenge against President Trump, is going to be at your town hall. What will you ask him?

Obviously the questions are going to be a little different for Bill Weld because he’s got a different base of support to deal with. He’s not running for the Democratic nomination.

This issue shouldn’t at all be partisan, so I need to understand how a guy like Bill Weld will articulate this to Republicans. Most Republicans do believe climate change is a real issue.

But again, this is not really a debate about believing this anymore, right? The debate is what actually needs to be done. And from a Republican and conservative standpoint, what does that look like? Because there’s no solution to climate change that does not involve massive expenditure and infrastructure change. So I want to understand how we articulate how you deal with these climate issues in an environment where conservatives and Republicans tend to be against spending public money. Is this the thing that you call the exception that we have to spend money on, otherwise the earth will disappear or burn?

Why anyone could win Georgia’s runoff elections, according to the polls
“This could be a massive disaster”: What happens if the coronavirus hits China’s internment camps?
4 winners and 3 losers on Super Tuesday
Who got married in Love Is Blind’s volatile season finale?
Apple and Google want to turn your phone into a Covid-tracking machine
The 5 best TV shows of August 2019