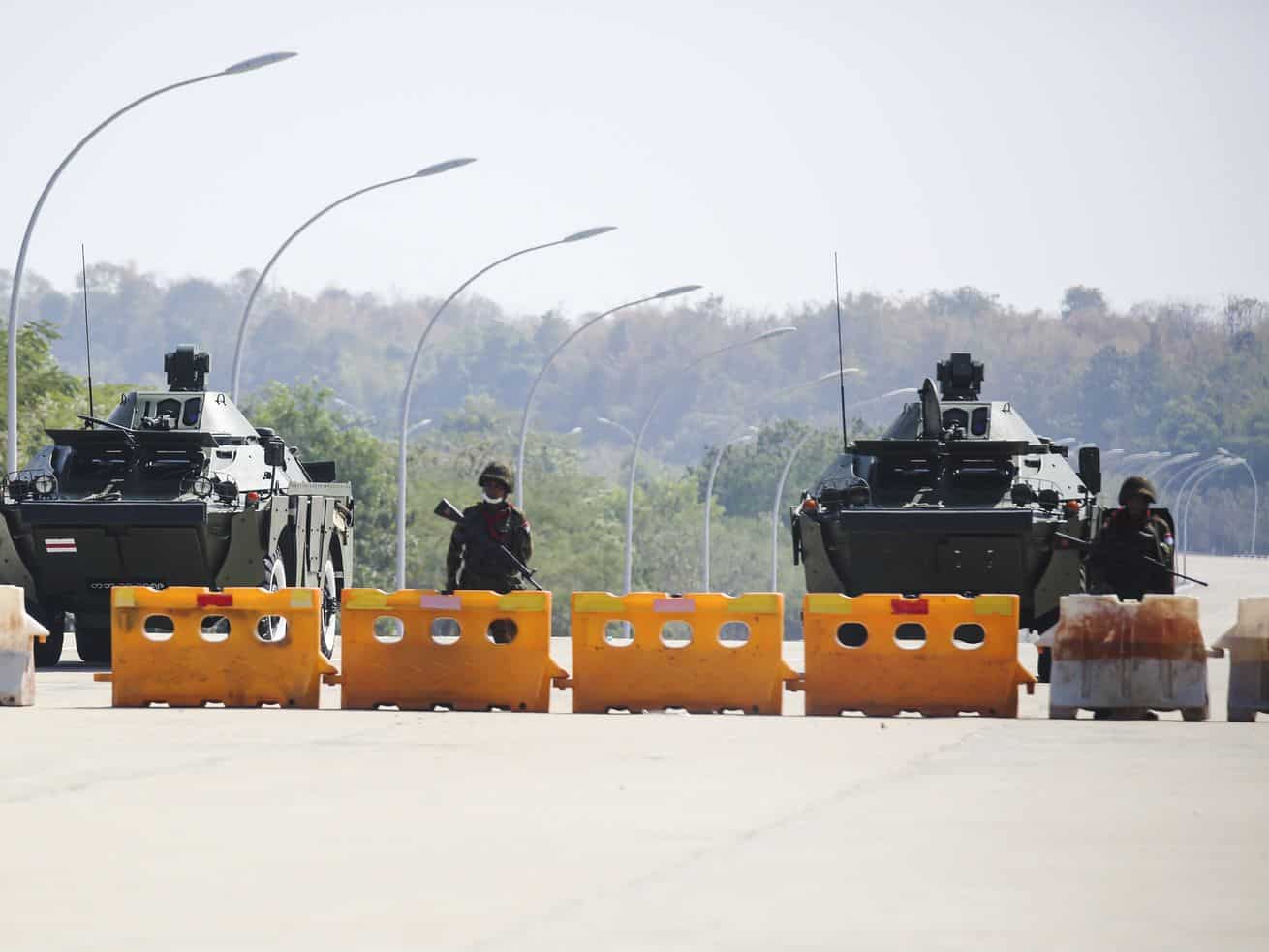 Myanmar’s military has ended its decade-long dalliance with democracy by launching a coup against the nation’s most popular political party and the former Nobel Peace Prize winner who leads it.

The military then announced on its television station that it would remain in power for one year, with ultimate authority resting with Senior Gen. Min Aung Hlaing. It’s unclear what will happen after 12 months, though some suspect the military will stay in charge beyond that.

After all, the military ruled the country for decades until 2011 when it made very modest pro-democracy reforms. And it only ceded some control after years of political and economic pressure from the United States and other nations.

But that quasi-democratic system no longer worked for the generals, who feared their ultimate authority would be curtailed. So instead of letting Myanmar’s budding democracy continue to grow, the armed forces chose to quash it.

The people of Myanmar seem worried, but not panicked. Though they awoke to a nationwide communications blackout, the country witnessed two coups before Monday — in 1962 and 1988 — and so many took similar precautions as in years past, buying extra groceries and withdrawing cash from ATMs. But they must still contend with the jarring scenes of armed soldiers patrolling the streets and the sudden disappearance of once-ubiquitous NLD flags.

Some worry that violence may erupt in defense of Suu Kyi, who enjoys a “godlike” status in Myanmar. In a statement posted on the NLD’s Facebook page on Monday, Suu Kyi said: “I urge people not to accept the coup by the military, and resist it resoundingly.”

A follow-up statement by top NLD figure U Win Htein called on the party’s followers to “oppose [the coup] as much as you can in a nonviolent way, as called for by Daw Aung San Suu Kyi” (“Daw” is an honorific in Myanmar).

But with its top leaders detained and the military back in charge, it’s unclear what, if anything, the country’s pro-democracy movement can do to reverse these latest developments.

“The military is setting parameters on what democracy can look like in Myanmar,” Darin Self, an expert on the country’s armed forces at Cornell University, told me.

The coup ends Myanmar’s most recent flirtation with democracy

Myanmar has toggled between military and civilian leadership since 1948, though the Tatmadaw, as the country’s armed forces are formally known, has remained the most powerful institution the entire time. In the late 1980s, a civilian pro-democracy movement gained strength with Suu Kyi as its leader.

For her efforts, the ruling military junta placed her under house arrest in 1989. The Nobel committee awarded her the Peace Prize in 1991 for her fight for democracy and emphasis on nonviolence.

The international community wasn’t happy with Myanmar’s autocratic leadership. The US, for example, placed sanctions on the country for decades, hoping those punishments would compel the generals to enact pro-democracy reforms and stop abusing human rights.

In hopes of ending that economic and political isolation, Myanmar’s top brass decided to take some modest steps toward a more democratic system.

The Tatmadaw spent five years drafting a constitution before it was accepted in 2008. The most noteworthy provision gave the military at least 25 percent of the seats in the legislature, no matter what. That was crucial, because no amendments to the new constitution could be passed without over 75 percent of lawmakers voting for them.

The military, in effect, could veto any attempts to change the game. That gave Myanmar’s government a window dressing of democracy — the party in power could run the day-to-day aspects of domestic and foreign policy — while never actually threatening the Tatmadaw’s hold on power.

With those rules in place, the junta released Suu Kyi from house arrest in 2010 under the condition that she could never be president.

But then the Tatmadaw steadily lost control. “I don’t think the military realized how popular the NLD would be,” said Cornell’s Self.

In 2015, the Suu Kyi-led NLD won 77 percent of the seats in Parliament in Myanmar’s first recognized, free and fair election in 25 years. The following year, Suu Kyi was given the title of “state counsellor” — a role created specifically for her — essentially allowing her to govern by proxy via an allied president.

As a result, the US lifted its sanctions on the country that had been in place for two decades.

Suu Kyi’s leadership wasn’t all bad for the military. Most notably, she backed the Tatmadaw’s 2017 campaign of mass killing and gang rape of the country’s Rohingya Muslim minority and even defended the generals involved at the International Court of Justice.

The military, acting with what the United Nations termed “genocidal intent,” killed thousands of Rohingya and forced a million more to flee their homes, most to neighboring Bangladesh, as their villages were burned to the ground.

Suu Kyi’s repeated refusal to condemn the military’s actions severely damaged her global reputation. While she still has her Nobel, multiple other international awards and recognitions she’d received for her pro-democracy work were rescinded, including the Ambassador of Conscience Award she’d received in 2018 from Amnesty International — the human rights organization’s highest honor.

“We are profoundly dismayed that you no longer represent a symbol of hope, courage, and the undying defence of human rights,” Amnesty’s Secretary General Kumi Naidoo wrote to Suu Kyi at the time.

But she did make plenty of moves that greatly troubled the ruling generals, namely her March 2020 push to amend Myanmar’s Constitution and strip the military of many of its authorities. The proposed changes — like reducing the number of allocated seats for military officers in Parliament — received majority support but were blocked by the Tatmadaw’s veto power.

Even so, passing those amendments remained a key part of Suu Kyi’s and the NLD’s platform. In November 2020, the nation seemingly gave them a mandate to pursue constitutional reforms after voting to give the NLD 396 of 476 seats in parliament, trouncing the military-backed party.

For some in uniform, that posed an existential threat to the Tatmadaw’s authority. And something needed to be done about it.

Why did Myanmar’s military launch the coup now?

No one can say the military failed to signal its intentions.

In response to the NLD’s landslide victory in November, the military and its political arm immediately claimed the elections were fraudulent, though foreign observers and the nation’s electoral commission declared there had been no significant problems. They went so far as to demand a new, military-supervised election, filed 200 complaints to local election agencies, and took their case to the nation’s Supreme Court.

Then last week, a military spokesperson warned that the armed forces might “take action” if their assertions of fraud weren’t taken seriously and notably refused to rule out a coup. Citing a provision in the constitution it drafted, the military said it could launch a coup if the nation’s sovereignty was threatened and declare a national emergency.

“Unless this problem is resolved, it will obstruct the path to democracy and it must therefore be resolved according to the law,” a military spokesperson said.

With the new parliament scheduled to hold its first session this week, where it would certify the results of the election that the military says was fraudulent, the military’s leaders finally decided enough was enough.

On Monday, they launched the coup.

At first blush, this looks like a straightforward story: Suu Kyi and the NLD were getting a lot of support, translating into growing political clout. Instead of letting the pro-democracy movement gain even more strength, the Tatmadaw decided to shut it down before it got worse for them.

Most experts I spoke to agree that is the general thrust of what just happened. But they injected some nuance and offered other possibilities to explain Monday’s dramatic events.

Cornell’s Self told me the military likely believes it got a raw deal from the 2008 constitution it drafted. Sure, it was still in control of Myanmar throughout Suu Kyi’s time as state counsellor, but she and the NLD came awfully close to curtailing their influence. Taking over in a coup, then, could allow the Tatmadaw to write a new constitution that weakens the pro-democracy movement and solidifies the military’s supreme role.

“The military taking power again like this means they can renegotiate from a position of strength,” he said.

Aaron Connelly, the Singapore-based Southeast Asia program director at the IISS think tank, said the military may have been blindsided by Suu Kyi’s popularity and acted out.

Myanmar’s armed forces live in separate areas from everyday citizens and have their own school system, TV station, and even hospitals. “It’s possible that they are so cosseted that they didn’t get it,” he said — that is, until the 2020 election showed just how powerful the NLD was becoming.

What’s more, Tatmadaw leaders — including Senior Gen. Hlaing — believe they belong to a respected, beloved institution. To see such widespread rejection could have led the armed forces to act out in revenge and frustration.

Northwestern’s Sarah Bouchat, meanwhile, has a more cunning explanation. The military, Bouchat said, knows it will always have the most power in Myanmar. But what it could gain through the electoral process was legitimacy. If its political arm could win elections, then its full control of the country would have national, democratic support.

But after losing the 2015 and 2020 elections in devastating fashion, the Tatmadaw realized that strategy wasn’t going to work and chose a new path while it had the chance. “They’re potentially using this global opportunity, where other leaders are focused on all of the crises around Covid-19 and economic recession, to seize whatever power they can with impunity,” Bouchat concluded.

“The United States removed sanctions on Burma over the past decade based on progress toward democracy,” he said, using the country’s former name. “The reversal of that progress will necessitate an immediate review of our sanction laws and authorities, followed by appropriate action.”

But chances of the Tatmadaw backing down anytime soon are small, experts say, meaning the new administration will likely have to reimpose financial penalties on Myanmar. That would essentially bring the whole situation back to the pre-2011 era: with the pro-democracy movement weakened and its leaders detained, and the military in full control of the country but under international sanctions.

It’s yet another unfortunate turn in Myanmar’s long road to democracy. “Transitions to democracy from a military regime are very, very difficult,” said Amy Liu, an associate professor at the University of Texas Austin, and “it’s hard to know how much longer these tensions will go on for.”

Wendy tries to make Peter Pan realistic, with mixed results
A book critic read 150 Trump-era books. Here’s what he learned.
California is using prison labor to fight its record wildfires
How we work out together now
5 months after being poisoned, top Putin critic Alexei Navalny detained upon Moscow return
America needs to close down