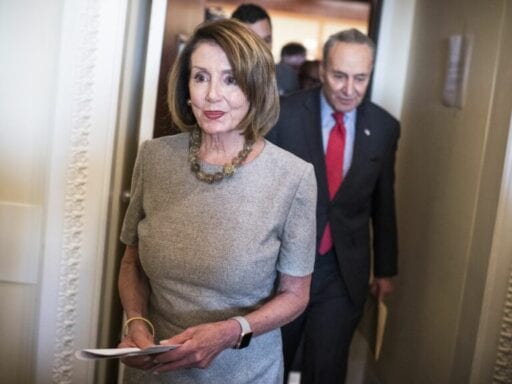 Pelosi and Schumer: “Attorney General Barr’s letter raises as many questions as it answers.”

Democratic leaders in the House and Senate are not satisfied with Attorney General Bill Barr’s summary of Special Counsel Robert Mueller’s report.

“Attorney General Barr’s letter raises as many questions as it answers,” said House Speaker Nancy Pelosi and Senate Minority Leader Chuck Schumer in a statement on Sunday, a few hours after Barr’s letter was released.

Barr sent a four-page summary of the report to Congress on Sunday, after Mueller’s nearly two-year investigation concluded on Friday. As Vox’s Andrew Prokop wrote, Barr’s summary shows, “Mueller did not affirmatively find either collusion between the Trump campaign and Russia, or obstruction of justice on the part of President Trump.”

“The fact that Special Counsel Mueller’s report does not exonerate the president on a charge as serious as obstruction of justice demonstrates how urgent it is that the full report and underlying documentation be made public without any further delay,” Pelosi and Schumer said in their statement.

Pelosi and Schumer have questions about Barr’s conclusions, especially because we now know the attorney general and Deputy Attorney General Rod Rosenstein — rather than Mueller — made the determination that there was not enough evidence to prove that Trump committed obstruction of justice.

“Given Mr. Barr’s public record of bias against the Special Counsel’s inquiry, he is not a neutral observer and is not in a position to make objective determinations about the report,” Pelosi and Schumer said in their statement. “And most obviously, for the president to say he is completely exonerated directly contradicts the words of Mr. Mueller and is not to be taken with any degree of credibility.”

House Judiciary Chair Jerry Nadler (D-NY) said his committee would soon be issuing a call for Barr to testify in front of Congress about his conclusions.

While Pelosi and Schumer didn’t weigh in on Nadler’s vow to bring Barr up to testify, they reiterated their call for the entire Mueller report to be made public, so that congressional committees investigating could have a complete picture of the scope of the special counsel’s investigation.

”Congress requires the full report and the underlying documents so that the Committees can proceed with their independent work, including oversight and legislating to address any issues the Mueller report may raise,” Pelosi and Schumer concluded. “The American people have a right to know.”

Judge stays Kentucky’s fetal heartbeat bill, keeping the state’s lone abortion clinic open — for now
Platforms are cracking down hard on political misinformation, but it’s still easy to find
Exit polls suggest significant polarization about the pandemic and its economic fallout
How remote work is quietly remaking our lives
Branding is the real reason Schick’s parent company bought razor upstart Harry’s for $1.4 billion
Fracking may be a bigger climate problem than we thought