Nancy Pelosi embraces the “enthusiasm” behind the Green New Deal 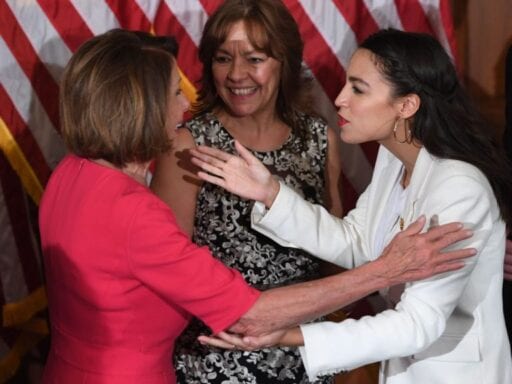 Pelosi and Alexandria Ocasio-Cortez both want to tackle climate change. But they don’t have the same vision for how to do it.

“Frankly, I haven’t seen it, but I do know it’s enthusiastic, and I welcome all the enthusiasm,” Pelosi told reporters, just hours before Green New Deal sponsors Rep. Alexandria Ocasio-Cortez (D-NY) and Sen. Ed Markey (D-MA) held their own press conference.

The resolution, which has skyrocketed to the top of the progressive agenda, outlines an all-encompassing plan that prioritizes climate change alongside economic justice and calls for federal investment into green infrastructure on a massive scale.

It’s already become a progressive rallying cry and litmus test in the 2020 presidential race, but its future in the House is less certain. Pelosi is correct that there is “enthusiasm” on the left for this idea, but this isn’t the first time she has tried to tackle climate change with legislation, and failed. She knows binding the entire Democratic Party around one idea is tricky — especially an idea that’s so bold.

It’s clear Pelosi and Ocasio-Cortez both think climate change should be a top priority for Democrats to tackle if they take back the White House and Senate in 2020, but they may well differ on how to go about it. While the speaker is excited about the newfound public push to stop climate change, she is also clear-eyed about the difficult trade-offs ahead.

What Pelosi has said about the Green New Deal so far

Activists have been scrutinizing Pelosi’s statements around the Green New Deal closely. Some thought she appeared to snub the resolution before it had even appeared during an interview with Politico released Thursday morning.

“It will be one of several or maybe many suggestions that we receive,” Pelosi told Politico. “The green dream or whatever they call it, nobody knows what it is, but they’re for it right?”

But Ocasio-Cortez, determined to project unity around her resolution, was not about to start a fight with the speaker of the House over her signature issue. Asked if she believed Pelosi’s comments were derogatory, Ocasio-Cortez pushed back.

“No, I think it is a green dream. I don’t consider to be that a dismissive term,” she said. “Nancy Pelosi is a leader on climate, has always been a leader on climate, and I will not allow our caucus to be divided up by silly notions of whatever narrative. We are in this together.”

The important context for all this is that the push for the Green New Deal was originally a campaign calling on Pelosi to form a select committee to tackle climate change. Ocasio-Cortez made headlines by joining climate activists for a sit-in in Pelosi’s office to demand one before she was even sworn in as a member of Congress.

Pelosi granted at least part of their wish, offering up the Select Committee on Climate Change, led by Rep. Kathy Castor (D-FL). But the negotiation over the committee’s formation was contentious — activists wanted it to be a powerful committee with subpoena power, something Pelosi did not grant.

Pelosi released the names of the Democrats who would make up that committee on Thursday, and Ocasio-Cortez’s name was conspicuously absent. Ocasio-Cortez and Pelosi separately told reporters that the speaker had invited Ocasio-Cortez to join, but she had declined because she had other committee commitments. She also suggested she was more interested in working on legislative solutions to climate change, rather than the investigative work Castor’s committee will be tasked with.

Pelosi knows the current political reality won’t let a Green New Deal happen in the next two years, or perhaps ever. But she doesn’t seem to think giving the issue more attention is a bad thing.

“Public sentiment will help us pass the most bold common denominator,” she said on Thursday. “I’m very excited about all of it, and I welcome a Green New Deal and any other proposals people have out there.”

Pelosi has been here before

The House speaker knows the challenge of pushing through climate change legislation; she personally drove a 2009 cap-and-trade bill to pass the House, despite its more conservative caucus. Still, the bill ultimately failed in the Democrat-controlled Senate.

“My flagship issue under President Bush was climate, addressing the climate crisis, and increasing energy independence for our country,” Pelosi told reporters on Thursday.

Some of the same players are involved in the new effort. Before he was the main Senate co-sponsor of the Green New Deal, Markey was one of the House members behind the very same cap-and-trade bill, called the American Clean Energy and Security Act but also known as the Waxman-Markey bill.

The bill, which leaned into market-based solutions and was much narrower in scope than the Green New Deal, would have capped the amount of carbon the United States was able to produce by mandating that companies that emitted carbon would have to buy or sell permits to do so. By putting a price on carbon, the thinking was, it would incentivize industry, manufacturing, and energy companies to produce less or look for renewable sources.

Pelosi whipped enough votes for it to pass in the House, despite the protests of moderate Democrats who feared that voting for a seemingly liberal bill would make them lose their seats (indeed, Republicans swept into power during the 2010 midterms).

“It could not have passed without Nancy Pelosi on the floor of the House of Representatives,” Markey said. “There’s no question Nancy Pelosi was the champion and will continue to be the champion to put together the team on every legislative committee to produce the legislation to solve this problem.”

The current Green New Deal proposal pans the idea of cap and trade, saying that it may be “a tiny part of the larger Green New Deal.” That 2009 bill tried to provide incentives for private industry to self-correct, while the Green New Deal plan envisions a much broader role for the federal government to implement a massive overhaul of infrastructure, manufacturing, and business.

“Cap and trade assumes the existing market will solve the problem for us, and that’s simply not true,” a frequently asked questions list accompanying the resolution states.

The Green New Deal is a mission statement. It still needs Pelosi’s support.

Pelosi has a lot of power to decide what bills make it to the floor. She’ll have a large hand in determining whether that climate bill is something more like a cap-and-trade 2.0 or a Green New Deal.

Pelosi has fiercely defended the 2009 bill, calling it one of the House’s “proudest boasts.” And she has vowed to resurrect some sort of climate bill in the next two years, now that she has resumed her leadership as speaker.

“We couldn’t pass in the Senate our climate bill, and we’ll be returning to that,” Pelosi said last month.

Pelosi said she welcomes other ideas on Thursday, and many of the chairs of her committees are working on some. Chair of the House Transportation and Infrastructure Committee Rep. Peter DeFazio (D-OR) recently told Vox he intends to hold multiple subcommittee hearings on the best way to get the nation’s infrastructure to be less dependent on fossil fuels.

“In surface transportation, it’s probably electrification, we’ve got to basically rebuild the highway system that came from the Eisenhower plan and when we rebuild it, we should put in the backbone for electrification,” DeFazio said. “There’s another possibility we can go to fuel cells if we can figure out how to make green hydrogen.”

While he says he supports the idea of the Green New Deal, he’s expressed doubt at the political feasibility of the plan.

“The idea that in five years or 10 years we’re not going to consume any more fossil fuels is technologically impossible,” he recently told Politico.

It remains to be seen whether Pelosi sides with those like Ocasio-Cortez or those like DeFazio. But she knows compromise is necessary.

Why stocks soared while America struggled
Joe Biden wins Oklahoma, another notch on his belt
“Liddle’, not Liddle”: Trump’s latest tweets are among his most bizarre yet
Trump-allied pastor: Reagan was a womanizer, too
America needs a bar and restaurant bailout
Anti-gay prejudice may have driven jurors to sentence a man to death. His execution is today.