Nancy Pelosi is elected to a fourth term as House Speaker 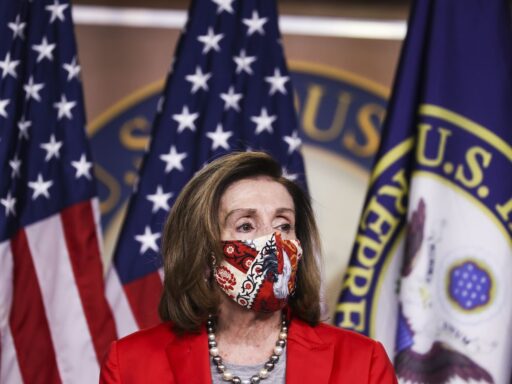 Pelosi will lead a slim Democratic House majority in the 117th Congress.

California Democratic Rep. Nancy Pelosi has been elected to another term — her fourth — as speaker of the House of Representatives, one she has promised will be her last.

By a vote of 216 to 209 Sunday, with three members voting present and several others either absent or voting for other candidates, Democratic lawmakers once again gave Pelosi the gavel just hours after the historically diverse 117th Congress was sworn in.

Pelosi faced no challengers, but had little margin for error given her party’s slender majority in the new Congress. Despite having expected to expand their majority in the 2020 elections, Democrats actually lost ground and now hold just 222 seats in the chamber — four more than the 218 needed for a bare majority — with two races still undecided. In total, the GOP picked up at least nine seats.

To retain the speakership, Pelosi needed only to receive a simple majority of votes in the full House. But she faced questions over whether she would be able to achieve that majority.

Among other issues, several Democratic House members — such as Wisconsin Rep. Gwen Moore — have tested positive for the coronavirus in recent weeks. Moore ultimately ended up voting on the House floor anyway, despite not having tested negative for Covid-19 since her positive test on December 28.

The absence of two Republican representatives-elect because of positive Covid-19 tests — David Valadao of California and Maria Elvira Salazar of Florida — also made the math somewhat easier for Pelosi.

Nonetheless, there was concern that, as in 2018, Pelosi would face opposition to her bid from within the Democratic Party — and that this time it might be enough to derail her chances.

After the 2018 midterms, more than a dozen Democrats opposed another speaker’s term for Pelosi, arguing that their party needed new leadership. Some of those who were against Pelosi then, like former New York Rep. Max Rose, lost reelection; others, like Pennsylvania’s Rep. Conor Lamb, remain in the House. Ahead of Sunday’s vote, there were lingering questions about how these lawmakers — as well as first-term members who had been silent about their intentions — might vote on Sunday.

But Jeffries himself was confident about Pelosi’s chances ahead of the vote Sunday, telling Fox News, “Nancy Pelosi will be the next speaker of the United States House of Representatives and I look forward to placing her name into nomination.”

And Virginia Rep. Gerry Connolly suggested to CNN that concerns about Pelosi’s ability to secure majority support were overblown, saying, “If Nancy can do anything, it is that she knows how to count.”

Ultimately, Pelosi was able to marshal enough votes to stay in power, with previously undeclared first-term members like New York Rep. Jamaal Bowman choosing to support her for a fourth term as speaker.

However, the 117th Congress will likely be Pelosi’s last as speaker. In 2018, she struck a deal with Democrats who opposed her run — promising that she would abide by proposed term limits for House leadership, meaning she would be able to serve only four more years.

Now that she has secured her position as speaker, Pelosi will face the early challenge of her majority dwindling even further, albeit likely just temporarily.

At least three House Democrats — Reps. Cedric Richmond, Marcia Fudge, and Deb Haaland — have been tapped for jobs in the Biden administration, leaving their seats vacant. (Richmond, who is in line to serve as director of the White House Office of Public Engagement, does not need to be confirmed for the job, though Fudge and Haaland do.)

All three currently serve in comfortably Democratic districts which are likely to remain blue if their current occupants leave for a Biden administration — but the seats will take time to fill, temporarily leaving Pelosi with as few as 219 Democratic votes.

Even once those seats are filled — assuming they are won by Democrats, as is likely — Pelosi will have to find a way to govern an occasionally fractious, diverse caucus and pass legislation with fewer votes to spare than she had in the last Congress. Unless she wins Republican votes, which is an unlikely prospect when it comes to many Democratic legislative priorities, she’ll be able to lose just four votes.

And Pelosi will preside over a deeply divided caucus — a split that was evident in the days immediately following the election, in which moderate members blamed progressives for losses, and that saw progressives call for even bolder action on issues like immigration and education.

The need for nearly every vote from both sides of the caucus will give individual members a greater ability to force compromises on legislation, a fact Washington Rep. Pramila Jayapal, chair of the Congressional Progressive Caucus, acknowledged recently.

“Anytime you have a very narrow majority it gives a lot of different parts of the caucus power. Progressives will have power but so will more conservative Democrats. So this will have to be a case where we are thoughtful, careful on how and when we weigh in on things and work as much as we can across the caucus as well,” Jayapal told Newsweek in December.

However, it’s not all bad news for Pelosi. For the first time since she yielded the speaker’s gavel in January 2011 following a Republican wave in the 2010 midterm elections, she will have an ally in the White House in the form of President-elect Joe Biden. What’s more, should Democrats win a pair of Senate runoffs in Georgia this week, the Democratic Party could enjoy unified control of the government for the first time since January 2011.