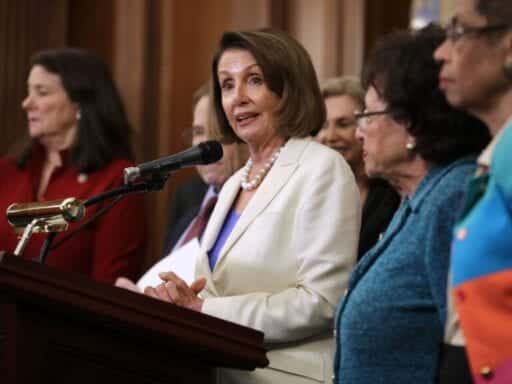 Pelosi may have just given skeptical House Democrats a reason to vote for her.

House Minority Leader Nancy Pelosi just suggested she sees herself as a short-term bridge leader for Democrats if they retake the House in 2018 and she becomes House speaker again.

“I see myself as a transitional figure,” Pelosi said in a new interview with Mark Barabak of the Los Angeles Times. “I have things to do. Books to write, places to go, grandchildren, first and foremost, to love.”

Pelosi made it clear she still intends to run for speaker if Democrats win in her interview with Barabak. But floating the idea that it’s a short-term thing may make Pelosi’s speakership bid more palatable to House Democrats who are skeptical about her remaining at the top.

Even as she is fundraising millions for 2018 candidates, Pelosi has faced increasing pressure from members of her own caucus and new candidates to step aside and make way for fresh leadership.

“I think there is widespread agreement that we need a rejuvenation of leadership,” Kentucky Rep. John Yarmuth told Vox this summer. “How that manifests itself, we’ll see. I think the caucus understands that the party’s changing, the base is changing, and new faces wouldn’t be bad for us.”

Pelosi is clear she’s focused on winning in 2018, and if Democrats are successful, she’ll soon be focused on shoring up her support for the speaker’s gavel. Even though she’s floating the idea of herself as a transitional speaker, she’s not exactly giving details on the timeline.

“Do you think I would make myself a lame duck right here over this double-espresso?” she laughed during the interview with Barabak.

For years, newer members of the House Democratic caucus have grumbled about the entrenched structure there that rewards seniority and makes it difficult to rise to the top quickly. And as Republicans ramp up attacks on Pelosi, she is under pressure from dozens of 2018 Democratic candidates to step down — especially those running in more conservative districts.

If Democrats win a narrow House majority in November, Pelosi will need some newly elected members who ran as Pelosi skeptics to change their minds, even as resentment of the long-entrenched leadership trio made up of her, House Minority Whip Steny Hoyer, and Assistant Democratic Leader Jim Clyburn has grown among established members of the Democratic caucus.

The consequence could be that, at a moment when the party should be celebrating a huge midterms victory, unified against President Donald Trump and preparing to roll out their agenda for the future, they’ll instead be fighting among themselves.

Pelosi is helped by the fact that few people have openly floated challenging her. Hoyer has made it clear he’s content to run for House majority leader if Democrats win, and Clyburn has said he’ll only challenge Pelosi for speaker if she fails to get to 218 votes. Younger Congress members, including Reps. Adam Schiff (D-CA), Hakeem Jeffries (D-NY), and Cheri Bustos (D-IL), have all made it clear they don’t want to openly challenge Pelosi and are looking at lower ranking leadership positions instead.

Pelosi and her team remain bullish about her prospects: They believe those who have called for new leadership haven’t been explicit and have left enough wiggle room to change their minds and vote for her.

Pelosi’s hints that she doesn’t plan to stay House speaker for long may help persuade key holdouts and get her to the 218 number she needs.

I Am Greta is an intimate, vulnerable documentary about the teen behind the headlines
Former FBI Deputy Director Andrew McCabe is at the center of a political firestorm again
Capitol Hill is beginning to see its own coronavirus-related closures
What Nancy Pelosi said about the 25th Amendment
Breast cancer awareness products profit off survivors’ suffering
Trump’s attempt to overturn the election result has sputtered out