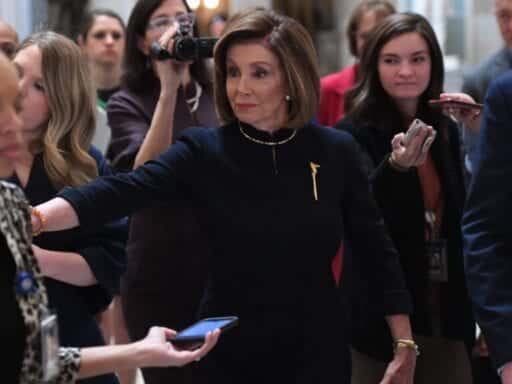 Share
Loading...
Speaker Nancy Pelosi wore a golden mace brooch to the House debates on impeachment. The mace is a historic symbol of the House of Representative’s legislative authority. | AFP/Getty Images

Pelosi’s mace brooch is a symbol of the House of Representatives’ legislative authority.

Speaker Nancy Pelosi opened the impeachment debate in the House of Representatives on Wednesday dressed in a crisp dark suit to embody the solemn tone of the event.

She stood next to a poster featuring the image of the American flag and the excerpted quote from the Pledge of Allegiance, “to the Republic for which it stands,” which she cited in her floor remarks as “what we are here to talk about today” in the impeachment of President Donald Trump.

BREAKING: House Speaker Nancy Pelosi: “Today, as speaker of the House, I solemnly and sadly open the debate on the impeachment of the president of the United States.” https://t.co/KV8jBJCHcL pic.twitter.com/eU6vLAytrY

The Democrat-controlled House is expected to vote along party lines to impeach the president, and as speaker, Pelosi is a central character in the impeachment saga. As someone who has spent decades in public service, Pelosi’s sartorial choices are worth noting, particularly for this historic event. It’s common for politicians and public figures to use fashion as an outlet for subtle statements of power or protest, and Pelosi is no different.

This is a woman who delivered an eight-hour, record-breaking filibuster in stilettos (long filibusters have historically been conducted by men in flat shoes, with notable exceptions), and wore a bright pink dress for her second swearing-in ceremony as speaker — a stark difference from the maroon suit she wore when she was first sworn in back in 2007.

(Speaker Pelosi’s office did not immediately return a request for comment; Pelosi has been in the chamber during the entire debate.)

Pelosi also wore a thin gold brooch of the Mace of the Republic, one of the oldest symbols of American government. The mace is a symbol of the House of Representatives’ authority in the legislative branch; it’s a ceremonial staff that rests by the speaker’s desk when the House is in session and has been historically used to restore order in the chamber.

Pelosi making a statement with her outfit.

She’s dressed in all black and wearing her power broach: the Mace of the Republic, which symbolizes the legislative authority of the House of Representatives.

Here’s Pelosi on the House floor with her broach vs a pic of the mace. pic.twitter.com/D0lw3ciR7S

Worn as a brooch, it delivers the unspoken message that Pelosi is the authoritative figure of the House. It asserts the political power she holds in office as speaker — particularly notable given that just yesterday, Trump accused her and House Democrats in a rambling letter of “declaring open war on American Democracy.”

Pelosi has sported this brooch before: during Trump’s 2019 State of the Union, and at a press conference in October to announce the House’s impeachment inquiry into Trump’s relationship with Ukraine. It’s fitting that she selected the mace for the six-hour House debate instead of the brooch of the American flag, which she wore to announce the two articles of impeachment against Trump.

The mace is a formal symbol of the House (which explained why she reserved it for House proceedings), and Pelosi seems to reserve her flag pin for appearances where she is generally addressing the American people. The flag imbues a sense of patriotism and duty to any politician’s outfit (male lawmakers tend to attach a small flag to their lapels), and Pelosi’s flag brooch is especially eye-catching and large.

Pelosi is one of the many powerful (and constantly photographed) women whose brooches carry significant meaning. Others include Queen Elizabeth II, former US Secretary of State Madeleine Albright, and Lady Brenda Hale, the president of the British Supreme Court.

Albright, the first female secretary of state, even wrote a book titled Read My Pins, which explored how she used pins and brooches during her diplomatic career as a means of expression.

”This all started when I was ambassador at the UN and Saddam Hussein called me a serpent,” she told NPR in 2009. “I had this wonderful antique snake pin. So when we were dealing with Iraq, I wore the snake pin.”

Brooches may appear unassuming to the casual viewer, but in a hyper-partisan, extremely online world, people take notice. Not all wearers might be as intentional as Albright, but there’s certainly some level of thought that goes into a brooch decision given the fever pitch of speculation that can follow.

For example, during Queen Elizabeth’s visit with Trump in July 2018, social media users theorized over the hidden meaning of the queen’s jewels. People pointed out that the queen wore a brooch given by the Obamas in 2011, and the theories about #BroochWarfare — and the queen’s political allegiances — spread from there.

Hale, another prominent British figure, wore a large brooch of a spider on her right shoulder while announcing the Supreme Court’s ruling that Prime Minister Boris Johnson had illegally suspended parliament. (Hale has a habit of wearing quirky, playful brooches.) Twitter users interpreted the accessory as a political message to Johnson, as some thought it resembled a flesh-eating camel spider.

Pelosi’s pin choice doesn’t require much close reading. It’s a reminder of her title as speaker, and that under her watch, Trump will (likely) be impeached by House Democrats. The impeachment saga has yet to play out in the Senate, but whether Trump is removed from office or not, Wednesday’s House proceedings are slated to be a historic event.

Here’s who might replace Haley as UN ambassador
Trump administration revokes reservation status for Mashpee Wampanoag tribe amid coronavirus crisis
Ethiopia says it’s captured the capital of its rebellious Tigray region
Why the vote count early on election night could be misleading
The Lincoln Project, the rogue former Republicans trying to take down Trump, explained
Use of the word “bitch” surged after women’s suffrage