Native American activists: The fire at Notre Dame is devastating. So is the destruction of our sacred lands. 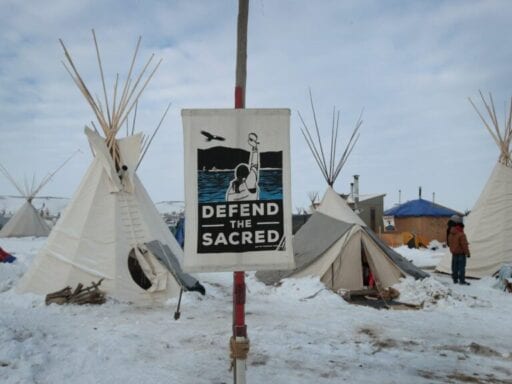 The devastating destruction of the Notre Dame Cathedral in Paris has fueled a wave of grief across the globe, but it’s also prompted discussion about tragedies that have long received far less attention: the active abuse of lands sacred to Native Americans across the US.

“The concern and dismay is being felt by many around the world,” reads a quote from attorney Casey Douma posted by Indigenous Goddess Gang on Instagram. “Now imagine that the damage to this historic and religious site was caused by a pipeline running through it, by fracking, or due to development.”

Statements like this one fit into a larger online discourse that’s emerged in the wake of the Notre Dame fire, which has included concerns about France’s role as a colonizer and the overwhelming attention that white western cultural edifices receive compared to religious structures of other cultures.

In the US, that disconnect is keenly felt by some Native Americans, who have seen the pervasive abuse of their sacred sites throughout American history. And while that disregard is currently affecting more than 30 sites across the country, such as Bears Ears in Utah, activists have repeatedly been shot down by the courts as they’ve tried to defend them.

“Year after year, sacred landscapes that are integral to the exercise of Native religions are being destroyed or are under threat by development, pollution, recreation, vandalism, or other public and private actions,” reads a statement from the National Congress of American Indians’ website. “There is no effective comprehensive policy to preserve and protect sacred places and Native Americans’ rights to access them.”

A post shared by Indigenous Goddess Gang (@indigenousgoddessgang) on Apr 15, 2019 at 5:01pm PDT

Indigenous Goddess Gang, a magazine dedicated to covering indigenous peoples through a feminist lens, was far from the only voice to respond to the attention directed at Notre Dame with a call to address the abuse of other holy sites with comparable concern.

Klee Benally, a Native American activist, juxtaposed an image of the Notre Dame Cathedral against one of the San Francisco Peaks in Arizona, a site that’s considered holy by 13 indigenous nations. As Benally writes, the land on this sacred site was burned by workers employed by the Arizona Snowbowl Ski Resort, a company that had obtained a permit from the National Forest Service to do so.

“I can’t help but reflect with many of my brothers and sisters in struggles to #defendthesacred, on the deafening silence we’ve endured when our most holy sites have been maliciously burned and maimed in the name ‘progress,’” he writes in his Facebook post.

I’ve been to the #notredame & could only wonder, why Indigenous People’s most holy sites are viewed as less sacred than…

Benally says his post was born out of “frustration,” noting that he viewed the Notre Dame Cathedral with “reverence and respect,” but wondered why native peoples’ sacred sites weren’t treated the same way.

The broader social media outcry was likely driven by the sheer contrast the response to the Notre Dame fire drew to other instances when indigenous lands have been desecrated, says Dartmouth Native American Studies professor Maurice Crandall.

“That this happened in a nation that actively participated in genocide and colonialism for centuries has caused many indigenous peoples to reflect and say there’s not an outcry when our sacred spaces are destroyed by pipelines or by more benign things like national forests or national parks,” he told Vox. “Not trying to discount people’s grief, but there’s this sense that we’ve been suffering similar injustices for centuries and there’s been little to no attention paid to that.”

In the US, Native Americans’ sacred lands are not always protected by law

A major reason Native Americans have struggled to shield sacred lands from destruction: They lack the legal protections to do so.

In the Supreme Court case of Lyng v. Northwest, the court ruled that Native American sacred sites are not protected from government action by the First Amendment, even if that action would disturb religious practices. Part of the context for the case was that the land in question was property the US government already owned, says University of Pennsylvania constitutional law professor Sally Gordon.

Gordon noted that it was tough to find another religious structure that could provide a direct comparison to how sacred lands were treated in that case, but noted that the government is currently in the process of trying to seize a Catholic Church to build a wall along the southern border.

The US government has been able to capitalize on many sacred lands because it took it as settlers were taking over different parts of the country, Gordon says: “The process of eliminating native power and consigning native Americans primarily to reservations meant the appropriation, through treaty or otherwise, of so many millions of acres.”

In addition to taking lands formerly occupied by Native Americans, the US government has also been exceedingly slow to acknowledge native religions, the practice of which was not protected until 1978. The American Indian Religious Freedom Act, which passed that year, sought to protect access to sacred lands as part of its tenets, though the legislation ultimately has very little legal weight.

“American law does not acknowledge indigenous religions on the same level as European and mainstream religion,” says Dina Gilio-Walker, a policy director at the Center for World Indigenous Studies. Gilio-Walker notes that the state of the law — combined with entrenched white supremacy — has fueled and continues to enable the seizure of Native lands.

“We’re talking about white supremacy not in a discourse of racism, but how white supremacy still constructs dominant society’s relationship with Indian country including in the legal system,” she added.

In addition to spurring a discussion about how sacred lands are treated, the Notre Dame fire has also attracted attention to the harm that’s been caused to other churches in the US, including three historically black churches in Louisiana that were destroyed by suspected hate crimes. The churches have since raised $1.3 million in order to rebuild.

There are efforts to reform existing laws

Changing the laws on a broader scale is one of the key ways to truly enshrine protections for sacred lands, and there are a couple different ways to do that.

One approach, which lawmakers including Rep. Deb Haaland (D-NM), one of the first Native Americans ever elected to Congress, are pushing, is legislation that would protect places like Chaco Canyon in New Mexico and bar any additional development by the government. A similar strategy is being tried in Bears Ears, though it’s an approach that Benally notes is very “site-specific.”

Every community should be able to voice their concerns when oil & gas companies want to drill. However, the President skipped meaningful consultation with tribes & outreach to our communities. So, we held a hearing. @NRdems #PeopleOverPolluters https://t.co/k6BK3XTzKd

More sweeping change could take the form of Congress passing amended versions of the American Indian Religious Freedom Act and the Religious Freedom Restoration Act, which would codify protections for sacred sites in a more standardized way.

Benally argues that the recent conversations about the way sacred sites are treated, spurred by the Notre Dame tragedy, could provide a launchpad for more substantive engagement. “It’s about our cultural survival,” he said. “Let’s go beyond the memes, let’s go beyond the social media postings.”

An inspector general reportedly finds that FBI employee altered a document in Russia investigation
Why Australia’s fires are linked to floods in Africa
Trump keeps using “sarcasm” to explain away his embarrassing statements
Hannah Gadsby, of the Netflix sensation Nanette, says she’s not quitting comedy after all
He fled Honduras, and its gangs, for safety in the US. After his death, who was to blame?
The “heartbeat” bills that could ban almost all abortions, explained