NBA players keep getting tattoos of corporate logos. Now the league is forcing them to cover up. 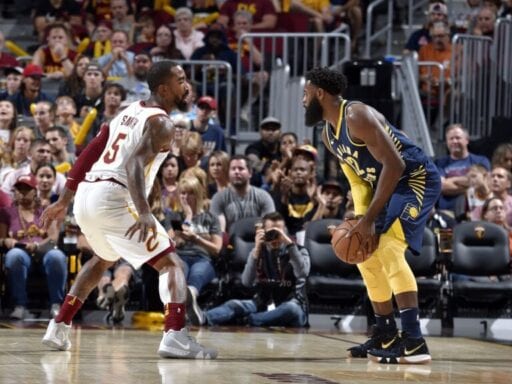 The league threatened J.R. Smith with fines if he didn’t hide his tattoo during competition.

Since Dennis Rodman stepped onto the hardwood in the ’90s with colored hair, piercings, and tattoos, the National Basketball Association has grudgingly accepted the fact that its players love body art. But the league’s recent approach to tats has sparked criticism: It is now requiring players, like Cleveland Cavaliers star J.R. Smith, who have tattoos of brand names to cover them up during competition or face fines.

But enforcement of this rule does not appear to be evenly applied to all players. Smith, for example, has a large tattoo of the streetwear brand Supreme’s logo on his right calf. He posted a picture of his new tat to Instagram in August.

The following month, he said on Instagram that the NBA had informed him he would be fined if he didn’t cover up the tattoo during competition because of the league ban on corporate logos.

“I swear I’m the only person they do shit like this to!” he complained. “So you mean to tell me i have to cover up my tattoo for what? You don’t make people cover up Jordan logos NIKE checks or anything else but because it’s me it’s a problem all of a sudden!!! Shit whack.”

Smith is no stranger to controversy in the league. He reportedly threw a bowl of soup at a coach and was blamed for the Cavaliers’ defeat in Game 1 of the NBA finals last season. Fans wonder whether his reputation as one of the league’s “bad boys” is why Smith has been threatened with fines for his Supreme tattoo, which he told Complex the brand did not pay him to get. After all, he’s hardly the only player with a tattoo of a corporate logo.

When Smith’s defenders pointed out that he was being singled out, the league ordered Los Angeles Laker Lonzo Ball to cover up his forearm tat of the Big Baller Brand logo. The athletic brand was launched by the athlete’s father, LaVar Ball, who made headlines after a quarrel with President Donald Trump last year. Rather than pay fines every game, Lonzo Ball chose to conceal the tattoo.

Free advertising? Not in the @nba. According to TMZ Sports, @zo has been contacted by the NBA to cover up his @bigballerbrand tattoo.

Unless the NBA can identify each of its stars with logo tattoos and threaten them with fines, however, it’s unfair to single out just a couple players. The problem with the NBA’s policy is really the same problem that school dress codes face — they’re applied unevenly and inequitably. If Smith wasn’t such a controversial player or Ball wasn’t so closely affiliated with Big Baller Brand, it seems doubtful their tattoos would’ve ended up on the league radar in this way.

Asked why Smith faced fines for his tattoo, an NBA spokesperson simply told ESPN, “NBA rules prohibit players from displaying any commercial logos or corporate insignia on their body or in their hair.”

That doesn’t explain why some players have been targets of the rule, while others avoid the potential fines and threats related to corporate body ink. It’s also unclear what purpose the ban serves. If an athlete hasn’t been paid by a company to get a corporate tattoo, he certainly isn’t using the league to profit from this sort of body art. In fact, many athletes have so many tattoos that it’s hard to make out any one of them; a corporate tat in a maze of others doesn’t really stand out.

The basketball site Clutch Points argues that, above all, the ban on corporate body art serves the NBA’s sponsors, since the league “has to focus on protecting the interest of their sponsors in order to keep the money tap running.” But this, it asserts, sets a dangerous precedent, both related to double standards and the personal freedoms of players. The NBA and Nike have a multiyear apparel deal, for example. This might explain why Gortat’s Nike “jumpman” tattoo has not been a target, while Ball’s Big Baller Brand ink has attracted the league’s notice.

“What if the sponsors, seeing they get a pass on their demands, get a bit more greedy though?” Clutch Points asks. “Will we see rookies entering the league get branded with the NBA logo and the logos of various official sponsors like cattle?”

The best way for the league to end this sort of speculation is to fairly enforce its ban on corporate tattoos or to waive the rule altogether.

6 takeaways from acting Attorney General Matthew Whitaker’s hearing
Sanders’s top staffers are making a pointed case against Elizabeth Warren
The future of the Senate may come down to Susan Collins
Study: more people reported sex crimes around the world in the wake of Me Too
How Hong Kong’s protests are shaping the response to the coronavirus
Devin Nunes was directly involved in the push for Biden Ukraine investigations, says Lev Parnas