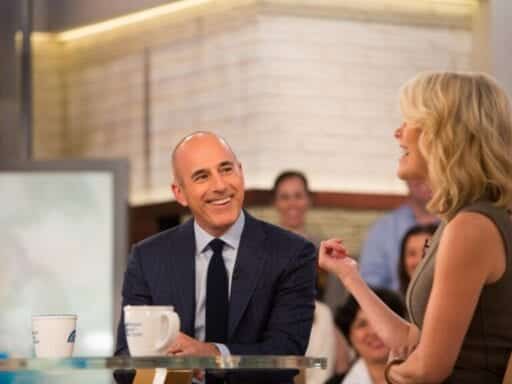 Share
Loading...
Matt Lauer laughs on air with Megyn Kelly on the set of Today on October 16, 2017. | Nathan Congleton/NBCUniversal via Getty Images

This is the problem with nondisclosure agreements.

NBC Universal said Friday that it will release former employees from a legal agreement to stay silent about their experiences working for the company.

NBC executives said it was standard practice for employees to sign nondisclosure agreements, or NDAs, upon leaving, but it’s a practice that has come under fire in recent years for its role in silencing victims of sexual harassment.

“Any former NBC News employee who believes they cannot disclose their experience with sexual harassment as a result of a confidentiality or non-disparagement provision in their separation agreement should contact NBCUniversal and we will release them from that perceived obligation,” a spokesperson wrote in a statement that aired on MSNBC’s The Rachel Maddow Show.

The move comes as NBC faces mounting criticism for how it handled sexual harassment and assault allegations against former Today show host Matt Lauer, who was fired in November 2017 after a colleague made a sexual misconduct complaint against him.

In a new book released this month by journalist Ronan Farrow, Catch and Kill, the woman who filed the complaint against Lauer spoke publicly about her experience for the first time, saying the Today host raped her in a hotel room while they were covering the Winter Olympics in Sochi, Russia, in 2014. Lauer says it was a consensual sexual affair.

In the book, Farrow also accuses NBC executives of trying to block his reporting of the Harvey Weinstein scandal. Farrow said he was told to “pause” his reporting, and he eventually took his investigation to the New Yorker, which published rape allegations against the now-disgraced Hollywood movie producer.

NBC Universal denies that it tried to stop the story from coming out, saying that Farrow’s reporting did not meet editorial standards.

News of all the potential coverups has alarmed employees at NBC News, host Rachel Maddow said Friday on her show on MSNBC, whose parent company is NBC News.

“The amount of consternation this has caused among the rank-and-file people who work here would be almost impossible for me to overstate,” Maddow said, before announcing the company’s decision to release women from their NDAs. To get permission to talk, however, the women must first contact the company’s legal department.

While many may see this as a good first step toward worker protections and transparency, critics argue that NBC is not going far enough to ensure victims are heard.

The wording of the statement released by NBC Universal has triggered some pushback from women’s rights advocates.

Tina Tchen, the incoming president and CEO of the Time’s Up organization, said that requiring former employees to contact the company’s legal department before speaking up is a huge barrier.

“If NBCUniversal is truly committed to letting survivors and employees speak out about sexual harassment at the network, it should simply release them from their non-disclosure agreements,” Tchen wrote in a statement posted on Twitter. “There is no reason to place the burden on those who choose to speak to reveal themselves in advance to NBCUniversal. This is an example of the burdens that perpetuate fear and silence, no matter what new policies and trainings may say.”

Both Tchen and Maddow also expressed disappointment that the company rejected calls to hire an outside law firm to investigate its handling of the sexual harassment allegations against Lauer and Weinstein.

“Accusations that people in positions of authority in this building may have been complicit in some way in shielding those guys from accountability, those accusations are very, very hard to stomach,” Maddow said on her show.

“NBCUniversal’s statement is not enough. The company should not make any former employee, specifically women, go begging on their hands and knees back to NBC to be released from an NDA. Women have already been through hell with this company,” Vester said in a statement Saturday to Variety magazine.

Her foundation, the Silence Breakers, has also called on NBC to hire outside investigators, to disclose the number of sexual harassment complaints against NBC employees, and to fully release women from their nondisclosure agreements.

The pandora’s box of sexual misconduct at NBC explosively opened with allegations against Lauer two years ago. Lauer started as co-host of Today in 1997 and became a well-known presence in American homes, interviewing public figures from Tom Cruise to Hillary Clinton, writes Vox’s Anna North.

“On Monday night, we received a detailed complaint from a colleague about inappropriate sexual behavior in the workplace by Matt Lauer,” said the statement, which was read on the air by Today co-anchor Savannah Guthrie. “It represented, after serious review, a clear violation of our company’s standards. As a result, we’ve decided to terminate his employment.”

The New York Times reported that the complaint came from a woman whose involvement with Lauer started during the 2014 Sochi Olympics, according to Lack, but whose name was not released. The Times reported that shortly after her complaint, NBC received at least two more. One woman, who also did not want her name released, told the Times that in 2001, Lauer asked her to come to his office during the workday. Then he locked the door, which she said he could do using a button at his desk (other NBC employees told the Times that the buttons were a security measure for high-profile employees). She said Lauer then pulled down her pants and sexually assaulted her. During the assault, she said, she passed out. She said Lauer got his assistant to take her to a nurse.

At the time, Lauer issued a statement saying that “some of what is being said about me is untrue or mischaracterized, but there is enough truth in these stories to make me feel embarrassed and ashamed.”

Now, two years after the allegations first became public, the woman who made the 2017 complaint has spoken out under her name: Brooke Nevils, a former NBC News employee, says that Lauer anally raped her in his hotel room at the 2014 Sochi Olympics. The account appears in Farrow’s new book, Catch and Kill. Lauer has denied raping Nevils and said they had an ongoing consensual sexual affair.

Meanwhile, Farrow’s book also describes an effort among NBC executives to cover up his reporting on the allegations against Harvey Weinstein. The National Enquirer tabloid had been following allegations against Lauer for years, Anna North writes. As Farrow conducted his reporting on Weinstein, the Enquirer began contacting NBC employees about Lauer and running stories alleging that he was cheating on his wife, according to Catch and Kill. And sources at both AMI (the Enquirer’s parent company) and NBC told Farrow they’d heard that Weinstein himself had made clear to NBC “that he was aware of Lauer’s behavior and was capable of revealing it.” In other words, if NBC published allegations against Weinstein then Weinstein would make public what he knew about Lauer.

NBC has denied that it was ever threatened with exposure of Lauer and NBC executives say they didn’t know about the allegations against Lauer until November 2017. Weinstein has also denied threatening NBC. But Farrow writes that “there was no doubt that the allegations against Lauer, and NBC’s wider use of nondisclosure agreements with women who experienced harassment, were under threat of exposure during our reporting. That precarious culture of secrecy made NBC more vulnerable to Harvey Weinstein’s intimidation and enticement.”

Ultimately, NBC told Farrow he could no longer work on the Weinstein story at the network — “I can’t have you going to any more sources,” NBC President Noah Oppenheim told Farrow, according to Catch and Kill.

Farrow said Friday that more women haven’t talked about their sexual harassment complaints because they signed nondisclosure agreements when they left the company — meaning the company can sue them if they do speak. It’s unclear how many former NBC employees who’ve been harassed or assaulted have been forced into silence by NDAs — and if NBC’s recent measure will be enough for them to come forward now.

The move by NBC brings to light the long-standing problem with NDAs in the workplace.

Nondisclosure agreements have been around for nearly a century, though they were originally used in business contracts to protect trade secrets. By the 1980s, they were standard language in white-collar job contracts and legal settlements. Because NDAs revolve around secrecy, the scope of their use was relatively unknown.

Then the Weinstein scandal broke. The New York Times’ report on sexual harassment allegations against Hollywood producer Harvey Weinstein shined a spotlight on how companies use these clauses to hide potentially illegal behavior toward women. Employees who worked at the company were required to sign nondisparagement clauses, and women who complained about harassment had to sign NDAs in legal settlements, which allowed Weinstein to continue abusing women under the radar.

Other women who have tried to share their stories of harassment at work have realized that they can’t. Former Fox News contributor Gretchen Carlson, who accused former Fox News CEO Roger Ailes of harassment, was one of many women at the company who signed a confidentiality clause, though she decided to speak out anyway. (Fox News has not sued her for breaching the contract.)

Women who violate these agreements could face hundreds of thousands of dollars in fines, depending on the details of the contract. Many of Carlson’s colleagues at Fox remained anonymous in describing their experience to journalists, fearing they would be breaching their contracts.

No data exists on how many companies require workers to sign these agreements, but they have become increasingly common in hiring contracts in the tech industry.

Since the Weinstein story broke, the flood of Me Too stories that have followed has put pressure on Congress to do something about widespread sexual harassment of female workers.

Republicans and Democrats agree on few things these days. But some members of Congress on both sides of the aisle seem to agree on this: Businesses should not be able to hide claims of sexual harassment against them from the public, and they should not force female workers (or any workers) to stay silent about it.

In July 2018, a bipartisan group of representatives introduced a bill that would bar employers from requiring workers to sign nondisclosure and nondisparagement agreements related to workplace harassment. These clauses are common in job contracts, essentially making it illegal for workers to say bad things about a company or from discussing workplace disputes such as sexual harassment claims.

The bill, called the EMPOWER ACT, would outlaw that practice in claims of workplace harassment. It would also require companies to disclose the number of harassment claims it settles each year and the amount paid out, but it would not ban voluntary agreements workers sign as part of a legal settlement. The Senate introduced its own version of the bill in 2018.

Republican congressional leaders were uninterested in it and the bill languished in both chambers. It has not been introduced again since Democrats took over the House.

If the bill had become law, former NBC employees wouldn’t have to ask for permission from the company to talk publicly about their time working there. They could simply break their silence. Perhaps they will anyway.

The lessons we should really be teaching kids in the pandemic
Republican House member once lamented you can’t call women “sluts” anymore
The stark loneliness of digital togetherness
Coronavirus is causing a mental health crisis. Here’s how to fight it.
Australia was a coronavirus success story. Now, an outbreak is prompting new lockdowns.
The trope of “outside agitators” at protests, explained