NBC’s Trial & Error is a joyful break from reality 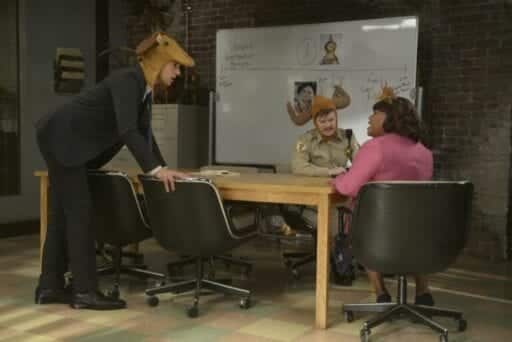 Every time a new piece of evidence comes to light in the trial of suspected murderer Lavinia Peck-Foster (Kristin Chenoweth), it goes on what is lovingly dubbed “the murder board.” There’s even a chant that goes with it — “Mur-der board! Mur-der board!” — which should give any Trial & Error newbies a good idea of what they’re getting into, i.e. a complete break from reality. Well, that, and the fact that the theories written on the board by the end of double-episode “The Murder Clock/A Hole in the Case” include “Vampire” and “Weekend at Bernie’s.”

For those unfamiliar with the series, Trial & Error is a send-up of the true crime genre. The first season, which starred John Lithgow as Larry Henderson (a meta-nod to Harry and the Hendersons), was a dead ringer (no pun intended) for The Staircase, down to the infamous owl theory. The second season, subtitled “Lady, Killer,” is a slightly subtler spoof; Lavinia’s case echoes the Robert Durst-centric miniseries The Jinx, as well as drawing on Law & Order and S-Town.

As suggested by those true-story reference points, there’s some tissue connecting Trial & Error to the fabric of reality, what with Lavinia’s wealth and status giving her seeming immunity to the law. But for the most part, like Lavinia, the show is on its own planet.

And that, more than the catnip it provides for true-crime enthusiasts, is Trial & Error’s true appeal. The show is an anomaly in a landscape full of art that’s reacting to the ever-shifting political climate. It’s not quite the anti-Handmaid’s Tale — its cheer isn’t a purposeful statement on the more grimdark tendencies of contemporary dramas — but it’s certainly a salve.

Trial & Error is unapologetically bright, and better for it

Trial & Error is a good-natured ouroboros, or a demented game of telephone; starting with the baseline of the true-crime drama, it’s only reacting to — consuming — itself, with each new episode spitting out a heightened version of what came before. The first two episodes of this second season were ridiculous enough, with dead bodies being discovered under a hedge maze and a protracted musical interlude. But the third and fourth episodes kick it up to the next level.

There’s something fundamentally larger than life about the show, appropriate given its mockumentary format. The town of East Peck, where Trial & Error takes place, seems to have no tether to the Earth we know and love. Even the series’ straight man, lawyer Josh Segal (Nicholas D’Agosto), who serves as the primary connection between the two seasons, has his own quirks, including a penchant for magic and a sense of interior design that another character describes as similar to that of an old lady.

His colleagues, Anne (Sherri Shepherd) and Dwayne (Steven Boyer), are also determinedly odd; Anne suffers from a laundry list of bizarre maladies, including “random dog-level hearing,” and Dwayne, while well-intentioned, just isn’t the sharpest pencil in the pack. The end of “The Murder Clock” sees him microwave his gun instead of his burrito, which he subsequently finds in his holster. And in one of my favorite jokes, when Josh berates him for showing up late to an evidentiary hearing — note the pronunciation of evidentiary — Dwayne apologizes for being unable to procure the “evidensh.”

But the jewel in the crown, of course, is Kristin Chenoweth. Lavinia may be diminutive in stature — she is literally picked up off the ground more than once — but she’s a tremendous presence. She’s so well-loved in town that the judge (named Alexander Kamiltow) sets her bail at $10, and pays it himself. Even when she’s briefly jailed for shoplifting (while in disguise as “Ronnie Del Mundo”), the police at the station ask her for her signature before they let her go, and Chenoweth leans fully into every ridiculous beat along the way.

With “The Murder Clock/A Hole in the Case,” the show breaks from reality, literally and figuratively

They’re all unbelievable characters, to the point that it almost doesn’t register when Trial & Error’s refusal to remain within the bounds of reality extends beyond its in-universe jokes to more meta territory. It’s a toeing of the line that begins with the introduction of Nina (Amanda Payton), who hosts the podcast “M-Town” — an obvious take on S-Town and a built-in nod to the popular fascination with true crime — and is brought home with sly lines that poke even further past the fourth wall.

In “A Hole in the Case,” Amanda inadvertently wins a bid for a goat due to a condition that causes her to “uncontrollably raise her hand” (which is how she accidentally wound up in the Marines for three years). Dwayne ends up taking care of it, and names it “John Lith-goat,” which immediately raises the question of whether John Lithgow exists in the universe of Trial & Error alongside season one’s Larry Henderson. Not that it ultimately matters — the laws of nature don’t apply in a world like this, and the whole point of Trial & Error is to kick back and have some fun with its cast of loons. Contrary as it may seem, though the series centers on murder, it’s an effective escape from reality.

That Trial & Error has managed to fly so under the radar seems like a bigger crime than the one being investigated on screen. Relatively speaking, it’s a trifle — again, it seems utterly untethered, but that disconnect is on a strictly narrative level. Like some of the other best comedies on air right now — Brooklyn Nine-Nine and The Good Place — Trial & Error doesn’t rob its characters of a sense of interiority in exchange for making them so colorful. A longing for human connection predicates much of the season so far, as it becomes clear that Lavinia’s wealth has had the side effect of cutting her off from people, and Josh’s recent move to Peck from New York is still the source of some derision from the townspeople.

“A Hole in the Case” ends with a laugh: After realizing that Josh is also lonely, Lavinia invites him to a ball that’s just the two of them (allowing for the brief gag of Josh holding Lavinia so that she can rest her head on his shoulder as they dance, which means her feet are, well, feet above the ground) and propositions him. Josh refuses, given that she is his client (and he’s already caught in a love triangle), and the moment is played as a goof. But moments of emotional connection are what put the muscle on Trial & Error’s bones, and allow it to flourish as a break from how bleak things can seem to be.

Today, Explained looks at how the coronavirus pandemic reshaped the world
Plight at the Museum
How US schools punish Black kids
The Supreme Court just backed away from one of its cruelest death penalty decisions
The case for canceling student debt — all of it
Cory Booker had a confusing answer about health care in his first 2020 press conference