Nearly a fifth of US emissions come from public lands. A new House bill aims to cut them to zero by 2040. 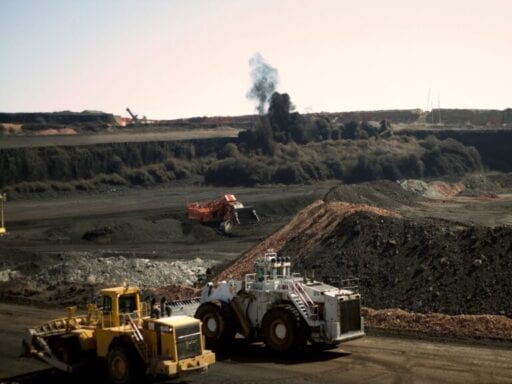 Share
Loading...
Buckskin Coal Mine in Gillette, Wyoming, seen in 2006. Federal lands account for 40 percent of US coal production. A new bill aims to bring greenhouse gas emissions these areas to zero by 2040. | Robert Nickelsberg/Getty Images

The House Natural Resources Committee just introduced one of the most aggressive climate bills of the current Congress.

House Democrats on Tuesday introduced an expansive new climate change bill that aims to zero out greenhouse gas emissions from public lands while supporting workers in the transition toward clean energy.

It’s one of the most aggressive climate bills that’s been introduced in the current Congress, and by targeting coal, oil, and gas production on public lands and their downstream consumption, it would take a bite out of nearly one-fifth of US carbon dioxide emissions.

“It is a new idea and a new paradigm for how fossil fuel energy would be developed on federal lands,” said Matt Lee-Ashley, senior director for environmental strategy at the Center for American Progress.

The 640 million acres of America’s public lands are home to unique wildlife and natural treasures. And beneath them are coal, oil, and natural gas deposits that can contribute to climate change as they are extracted and burned.

The bill, called the American Public Lands and Waters Climate Solution Act, aims to make federal public lands a net-zero source of emissions by 2040. It raises the price tag via royalties for fossil fuel extraction in these regions and channels the added revenue to provide economic aid to parts of the country that depend on mining and drilling. Tallied in the public lands total isn’t just emissions associated with fossil fuel extraction, but downstream uses of fuels such as burning coal for electricity or gasoline in cars.

By including both the production and the use of fossil fuels, the bill deploys one of the more overlooked tactics to fight climate change: restricting the supply of fossil fuels and pressuring the producers.

Without mentioning it by name, the bill also evokes the just transition concept central to the Green New Deal. It follows bills from congressional Democrats to make the US rejoin the Paris climate agreement and a bill targeting greenhouse gas emissions associated with public housing.

The climate and public lands bill comes at a time when US greenhouse gas emissions are on the rise and the US is conspicuously withdrawing from the Paris climate agreement, the main international framework for fighting climate change.

While it stands little chance of passing the current Congress, let alone getting signed into law, the new public lands and climate bill lays the groundwork for a future administration to ramp down greenhouse gas emissions. Let’s walk through it.

Federal land and water are an overlooked but critical climate target

Since federal public lands are squarely in the jurisdiction of the federal government, they’re an important policy lever for curbing emissions. While transportation and electricity production are the two largest sources of greenhouse gas emissions in the United States, power plants and vehicles largely in private hands and governed by a mix of federal, state, and local regulations. That makes it difficult to craft federal policies that can throttle their emissions. Several past attempts to do so have been tied down in litigation or reversed by the Trump administration.

In 2018, the US Geological Survey put out its first-ever report on the total greenhouse gas emissions from federal lands, from extraction to end-use combustion. The report found that these emissions comprised 18.6 percent of the US total in 2014, the latest year for this assessment. So any comprehensive strategy to deal with climate change in the United States has to contend with public lands. “If public lands were their own nation state, they would be the fifth largest emitter in the world,” said Chase Huntley, who works in the climate and energy program at the Wilderness Society.

To ratchet down these emissions, the climate and public lands bill starts with a year-long pause on new fossil fuel leases. During this time, the Interior Department and the US Forest Service would have to craft a strategic plan to reduce greenhouse gas emissions. This would be informed by a study commissioned from the National Academies for all the methods the country can use to meet the target, whether that’s deploying renewables or reducing leaks in pipelines or increasing efficiency.

The bill doesn’t restrict fossil fuel production and consumption directly, but sets a finite carbon budget that shrinks over time. By 2025, for example, emissions from public lands must fall by at least 35 percent compared to 2014.

In theory, new fossil fuel leases on public lands could still be issued after the one-year moratorium expires, but if the carbon budget is exceeded, new leases will stop.

And the goalpost of net-zero emissions doesn’t mean halting the use of fossil fuels, but it does mean compensating for their emissions with technologies like carbon capture and sequestration.

The bill also contains provisions for supporting parts of the country that may lose jobs if fossil fuel extraction is halted. Tactics include retraining workers for jobs in other industries.

About 15 percent of the carbon dioxide emissions associated with public lands is absorbed by the ecosystems in these areas. The bill proposes that regions formerly used for mining and drilling could be remediated so that the restored vegetation takes in carbon from the air. “From where we sit, this is one of the most exciting parts of the discussion and one that has been overlooked for a while,” said Huntley.

Part of the funding for this would come from increasing fees for leases on public lands. The royalty rate for onshore coal, oil, and gas would rise from 12.5 percent to 18.75 percent. Many of these fees right now are below the rates charged on private lands and haven’t been adjusted in decades. In 2018, the Interior Department’s Bureau of Land Management raised a record $1.1 billion in revenue from oil and gas lease sales.

Under the bill, half of the revenue from rate increases would go into the transition fund and the remainder would go back to the state where the mining or drilling would take place.

This could be a template for a future administration

While the climate and public lands bill already has six cosponsors and endorsements from groups like the Natural Resources Defense Council and the Wilderness Society, it doesn’t have an easy road ahead.

The House Natural Resources Committee is aiming to hold hearings on the bill early next year. But even if it clears a vote, it’s likely to go right on top of the pile of almost 400 bills that have already passed the House and will likely not receive any time in the Senate.

However, a bill like this could be a useful way to test the waters for such a plan should the Senate or the White House come under Democratic control next year.

Getting fossil fuel industry workers to buy into the proposal, particularly labor unions, may be another big challenge. When the Green New Deal was presented earlier this year, some labor groups were skeptical about the provisions to ensure a just transition.

“The whole notion of a ‘just transition’ for workers simply does not exist,” Phil Smith, a spokesperson for the United Mine Workers of America, told Vox in June. “There never has been an example of a just transition in this country.”

On the other hand, this bill may not go far enough for other environmental activists. Groups like Greenpeace and 350.org have backed a keep-it-in-the-ground approach for fossil fuels rather than any measure that would allow them to continue to be used. “We cannot solve the climate crisis and continue to extract fossil fuels at the same time,” said John Noël, Greenpeace USA senior climate campaigner in a statement in response to the bill.

But it’s an intriguing starting point for a discussion on how to reshape the fossil fuel industry, reduce public land emissions, and create an off-ramp for mining and drilling workers who may lose their jobs in the process.

Rep. Steny Hoyer made a quiet, powerful case for bipartisanship during the impeachment debate
Trump stumps for himself during a Mississippi rally for a tight governor’s race
Democrats’ long game on the Supreme Court: it might be too late to stop Kavanaugh, so what then?
MLMs are using the coronavirus to recruit new sellers
The Supreme Court decision gutting public sector unions, explained
What happens if a gorilla gets Covid-19?