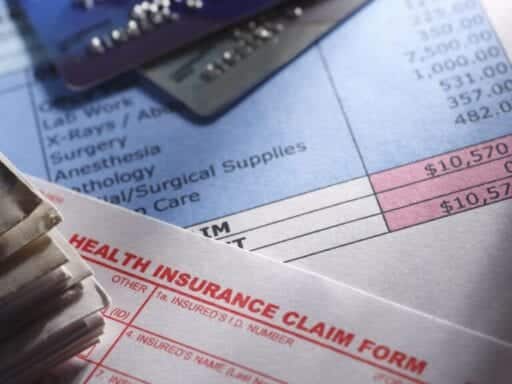 Share
Loading...
More than 4 in 10 Americans say they or their family had received a surprise medical bill from an out-of-network health care provider in the past. | Getty Images

Many Americans have gotten a surprise medical bill and had trouble paying it off.

Nearly half of Americans say that they or somebody in their family received a surprise medical bill, and most people worry they would struggle to pay a surprise bill, according to a new poll meant to help reignite the stagnated debate in Congress on the issue.

The survey, conducted by nonpartisan pollster Perry-Undem for the consumer group Families USA, found that 44 percent of voters said they or their family had received a surprise medical bill from an out-of-network health care provider in the past. About the same number, 45 percent, said they had not. A previous analysis by the Kaiser Family Foundation found that 18 percent of emergency room visits resulted in at least one out-of-network charge.

“I think everyone does know someone who has gotten a surprise bill or received one themselves,” says Claire McAndrew, director of campaigns and partnerships at Families USA, which is pushing Congress to act to end surprise billing. “People across the country are deeply affected by and scared about surprise bills.”

The problem of surprise medical bills has become a major focus for the public and lawmakers after reporting by Vox and other news outlets highlighted how people can be hit by unexpected bills for tens of thousands of dollars when they visit the hospital, often for emergencies, and end up receiving some services from a health care provider not covered by their insurance plan.

The public wants the issue addressed. According to the new survey, 88 percent of voters said they support Congress passing legislation to protect patients from surprise medical bills. Strong majorities of Democrats, independents, and Republicans said they backed such a proposal.

“A large majority of Americans are scared of this problem. An overwhelming share wants Congress to fix that,” McAndrew says. “This should be a no-brainer.”

Families USA is transparent about its reasons for commissioning and releasing the poll, which is going public in tandem with a $250,000 digital ad campaign: Groups opposed to the fixes being considered in Congress have spent millions of dollars on ads, including some that ran during the World Series, to try to tamp down momentum for a bill getting passed.

“Our sense was that Congress was moving forward in a bipartisan way, while holding down overall costs, and then special interests move forward with a $28 million attack campaign over August recess,” McAndrew says. “We are concerned that an attack campaign from special interests could cloud the vision of members of Congress about what the American people really want.”

As the New York Times reported in September, the group running those opposition ads, called Doctor Patient Unity, is effectively a front for doctor-staffing companies that have received money from private equity firms. They have labeled the proposals to stop surprise bills as government rate-setting.

The dispute over the surprise billing proposals is really about money. The various bills moving through the House and Senate take different approaches to resolving how much a doctor or hospital should be paid for out-of-network care in lieu of sending a surprise bill to the patient.

The Senate bill would set a default price, equivalent to the rate insurers would pay to in-network providers in the same area. The doctors groups call that rate-setting.

They prefer the approach adopted in the House bill, which also sets a default price but allows for an arbitration process under certain conditions. That at least opens up the possibility that doctors and hospitals could secure a higher payment through arbitration.

The movement on surprise billing has been quiet on Capitol Hill since the summer, when House and Senate committees both advanced their bills.

A House aide told me the legislative push is in a holding pattern for now, though staff from both chambers are still meeting regularly to work out a compromise between the two bills. Payments to providers are still the main issue to be resolved.

Families USA and other consumer advocates are hoping to jumpstart the debate by reminding lawmakers about the scope of the problem and the overwhelming public support for a solution.

Talking about the Warren and Sanders handshake keeps us from having to talk about sexism
Most candidates run to the center in the general. Biden is moving left.
Doris Day was a conservative icon amid a turbulent counterculture. But her life belied her persona.
An evangelical group is trying to strip LGBTQ protections from an anti-lynching bill
Why an endangered Republican Senate majority is targeting Minnesota in 2020
Antitrust officials ordered Facebook, Amazon, and other tech giants to disclose 10 years of acquisit...