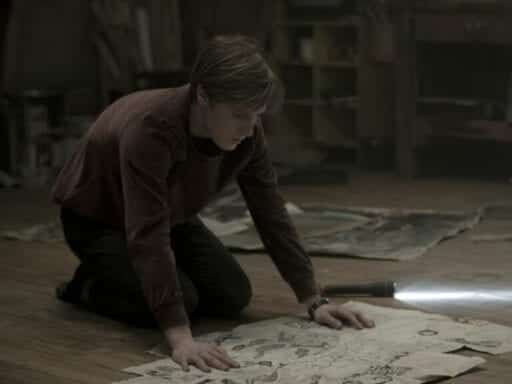 The sci-fi series is the closest thing you’ll get to a TV show that’s a conspiracy wall.

In Watch This, Vox critic at large Emily VanDerWerff tells you what she’s watching on TV — and why you should watch it too. Read the archives here. This week: Netflix’s German sci-fi drama Dark, which dropped its second season over the summer. You can watch it on Netflix.

When I reviewed the first season of Netflix’s Dark upon its release in 2017, I said the best way to experience the series might be as a chart or graph. It’s an idea I still stand by. The sci-fi series turns time travel into a series of logic puzzles — if Character X is played by Actor Y in timeline Z, then solve for A. That sort of thing.

The series is often positioned as a counterpart to Stranger Things, because both shows have prominent storylines set in the 1980s and feature kids who wander about a small town where weird things are happening.

On the one hand, I get it. Those are some pretty big similarities! On the other hand, Stranger Things prides itself on its clean, straightforward storytelling; even the series’ mysteries have relatively easy-to-understand solutions. But Dark is a show where even the set decorations are hinting at heretofore unrevealed secrets of the show’s world.

Dark’s second season — of a planned three — dropped in June, and it only increased my appreciation for this deeply weird show’s deeply weird grand design. It is not a show that wants to prompt intense emotional responses in you or even a show that really wants you to understand it. It only works if you become obsessed with it and start charting out its many timelines, characters, and iterations. And don’t we all need something like that?

Time travel stories are almost always about making sense of a puzzle at some point. Dark leans into that.

When Dark begins, it’s autumn 2019 in Germany. The gray skies and cold rain already make for a foreboding backdrop, but so does a missing boy. So far, so Stranger Things. But by the end of the first episode, the characters will have discovered something strange and wondrous: There’s a wormhole beneath their small town, and it connects two different periods in history that are 33 years apart.

This premise is fairly manageable throughout the first half of season one, when the wormhole seemingly only connects 2019 and 1986. (That first half of the season ends with a terrific reveal that stands as a rare example of how planning every single plot twist in advance can pay off instead of coming back to bite you.) But as the season wears on, a third timeline (in 1953) is added, and the story becomes more complicated.

Season two increases the juggling act, by leaping several months ahead in all three timelines — to 2020, 1987, and 1954 — and then adding two more timelines in 1921 and 2053 (the latter of which is a post-apocalyptic mess). The whole thing can feel a little like an adaptation of that gif of Charlie from It’s Always Sunny in Philadelphia trying to explain his conspiracy wall, but when it works, it definitely works.

At its core, Dark is primarily concerned with determinism and free will, as so many great time travel stories are. (As if to underline its themes of fate and freedom, the series even has a seemingly villainous Catholic priest character, because why not?) But where something like the four-season Syfy series 12 Monkeys turned those ideas into the stuff of grand opera and surprising playfulness, Dark weaves them into a complicated puzzle that you, the viewer, are meant to solve.

To be fair, this is true of most time travel stories. If you have free will in a time travel story, you can alter the past and change the present. But this creates a paradox — because if you change the future, then where did the version of you who wanted to change the past in the first place even come from? Many time travel stories sidestep this problem by, in essence, creating alternate realities for the time traveler to become trapped in, but Dark solves it in a way that I’ve consistently found satisfying, if a little overcomplicated: There is no free will. We are all trapped by time. We must follow its dictates.

For instance, if you are a time traveler who goes back in time to kill baby Hitler, somehow your actions must protect baby Hitler, because Hitler existed and for you to know of his horrors, you have to have lived in a world where World War II happened as it did in our world. The classic outcome of this type of situation in a time travel story is that by trying to kill baby Hitler, you instead set him on the path to becoming the great villain we know him to be. The takeaway is that time is our god, and on some level, we have to worship it.

Dark takes this quintessential time travel paradox and cubes it, adding so many paradoxes and logic wrinkles that keeping track of them all can give you a headache. But there’s something entertaining about the intellectual rigor all the same. I never feel like Dark is stuck in a corner. I always know it’s going somewhere ridiculous, and I’m always glad to be along for the ride, even if watching the show feels a little like trying to solve a sudoku puzzle on a roller coaster.

Dark is streaming on Netflix. The third and final season is currently in production.

Vote-by-mail is not full of fraud, despite Trump’s debate claims
Trump just lost his best chance to kill DACA this year
An expert on asylum seekers and refugees is joining Biden’s National Security Council
An extraordinary Twitter breach compromises everyone from Elon Musk to Kanye West
Biden’s “lying dog-faced pony soldier” moment, explained
Scott Pruitt is leaving behind a toxic mess at the EPA