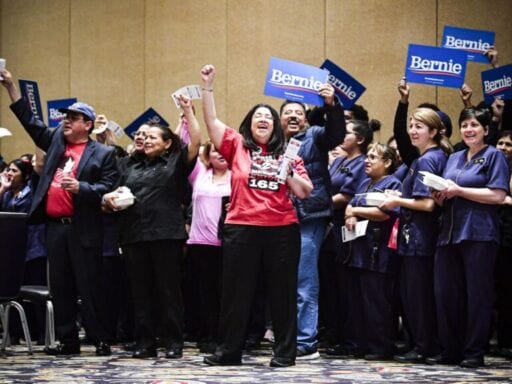 Voting is underway in the Nevada caucuses. While we are still waiting for official results, we have some numbers from early entrance polls — and they look good for Sen. Bernie Sanders (I-VT).

First, the usual disclaimer about entrance polls: They don’t always capture the results accurately and have been wrong before. In the past, some entrance polls have discounted Latino voters, appearing to skew the results for a different candidate before the actual votes came in.

Numbers from entrance polls are still rolling in as pollsters continue to interview voters. That said, the early data from major TV networks and newspapers is showing Sen. Bernie Sanders in the lead.

Here’s the NBC breakdown among demographics:

Here’s the NBC poll breakdown by age. The candidates are tightly clustered among voters who are over 45 years old, with Biden and Sanders tied among this group. The poll shows that Sanders appears to be winning the vast majority of younger voters.

The ideological breakdown in the NBC poll also looks good for Sanders. He has a slight lead among the 34 percent of polled voters who identify as moderate or conservative, followed by Biden and Buttigieg.

CNN entrance poll: Latino voters could give Sanders a boost

Here’s the CNN breakdown among demographics:

CNN’s poll found that Sanders had a commanding lead among self-described liberal voters in Nevada. Here’s that ideological breakdown:

The CNN entrance poll also found three in five Nevada caucus-goers decided whom they’d be voting for before February, compared to two in five voters who reported deciding in the past month.

Washington Post’s entrance poll: Biden is up with black voters

The Washington Post has also posted entrance poll results, which are being updated as the Post conducts more interviews. Its entrance polls also show Sanders winning in many key categories. Here’s what the poll shows so far:

Breakdown among gender: Men make up 46 percent of voters, and women 54 percent.

The Post’s age breakdown shows Sanders leading most age categories, save for voters 65 and older, most of whom support Biden.

It’s worth repeating that it’s still early and we are still waiting for final results. But, added up, these seem like promising numbers for Sanders.

The Defense Production Act, the law Trump is using to boost coronavirus supplies, briefly explained
Steve King still doesn’t think of himself as racist
HR experts: We’d nip Biden’s behavior in the bud
Why our individualistic culture makes us less happy
Australia’s massive fires, as seen from space
Why Trump didn’t declare a national emergency over a border wall (yet)