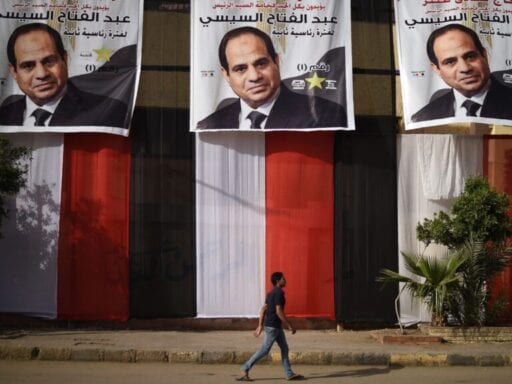 Americans have a right to protection by the government when abroad.

One of the many privileges of being an American citizen is supposed to be that if you find yourself in a scrape with a foreign government, you’ll find that the world’s mightiest superpower has your back.

But that’s apparently no longer the case in the Trump era, according to a pair of explosive allegations leveled by New York Times publisher A.G. Sulzberger in a speech delivered at Brown University and repurposed as a Times op-ed Monday night. Sulzberger details a range of challenges facing the practice of journalism around the world, some old and some new, but also one extremely specific instance of the American government failing to meet its obligations to an American citizen arrested in Egypt.

The conceptual link between the misconduct Sulzberger alleges and the president is very clear — Trump has denounced the free press as “fake news” and “enemies of the people” and somehow managed to look at America’s decades-long pattern of turning a blind eye to human rights abuses by our Middle Eastern allies and made policy even blinder. But the specific facts Sulzberger describes don’t directly implicate the president or any other top officials beyond the embassy in Cairo.

It’s the classic case of a situation for which a rigorous oversight investigation is necessary. Congress should find out if this is a case of rogue officials misreading signals from the top, or if it’s genuinely the case that the secretary of state, the president, or other top officials have instructed embassies to stop going to bat for the rights of American journalists abroad. It appears that Trump is on the verge of getting impeached for a whole other set of misconduct. But the presidency is a big job and there’s plenty of room to investigate misconduct on other fronts as well.

The first one, which seemed to attract the most attention on media Twitter Monday night, related to Declan Walsh. The Times got a warning from a US embassy official that the Egyptian government planned to arrest Walsh and that they should try to get him out of the country. Such warnings, according to Sulzberger, have come up many times over the years, but this time it was different because “the official was passing along this warning without the knowledge or permission of the Trump administration,” which he believed would refuse to help.

“The official feared being punished for even alerting us to the danger,” but fortunately the Times found a workaround. Walsh was born in Ireland, so the Times went to the Irish government for help and their embassy was able to exfiltrate him.

That’s a disturbing account. But based on that story alone, it’s at least possible that the official in question was mistaken. He was responding preemptively to hypothetical administration misconduct which, all things considered, was probably the right call but it also means that no actual misconduct happened.

The second story has less drama but a clearer-cut pattern of facts. David Kirkpatrick was arrested in Egypt for no good reason, and the government simply refused to protest the arrest:

Eighteen months later, another of our reporters, David Kirkpatrick, arrived in Egypt and was detained and deported in apparent retaliation for exposing information that was embarrassing to the Egyptian government. When we protested the move, a senior official at the United States Embassy in Cairo openly voiced the cynical worldview behind the Trump administration’s tolerance for such crackdowns. “What did you expect would happen to him?” he said. “His reporting made the government look bad.”

Sulzberger doesn’t go into further detail, but I think it’s obvious what any American should expect what would happen to him — that the American government would stand up for American citizens’ rights.

The United States has limited capacity to influence foreign governments. And some countries are too powerful (China, Russia) or too hostile (North Korea, Cuba) for the American government to be a very effective advocate for American journalists’ ability to visit and report unmolested.

But Egypt is not a major world power, and it’s not a geopolitical antagonist of the United States. It’s part of America’s system of alliances in the Middle East, with a government that should be at least partially responsive to American concerns. But Trump has turned the basic patron-client relationship in the region on its head, and in particular shown a repeated indifference to journalism and journalists.

Back in November of 2018, of course, Saudi government personnel acting at the apparent behest of the country’s crown prince murdered Washington Post columnist Jamal Khashoggi while he was in Turkey.

Khashoggi was not a US citizen, but he was a legal permanent resident of the United States and thus operating under the protective umbrella of the American government. In an ideal world, not only would one want foreign governments to avoid murdering American citizens, one would want governments to steer clear of actions even remotely close to that.

The murder quite rightly prompted considerable bipartisan outrage in the United States Congress, but Trump refused to do anything about it — absurdly citing the value to the United States of exporting military equipment to Saudi Arabia. The truth is the exact opposite: a close defense relationship with the United States is valuable to the governments of allies in the Middle East. The US is supposed to be the top dog in these relationships, and foreign governments are not supposed to be killing and detaining Americans with impunity. Yet they are doing so, and Congress has a real obligation to find out why.

The murky nexus of Trump and the Gulf

In his op-ed, Sulzberger draws a line between the administration’s indulgence of Egypt’s desire to silence American journalists and Trump’s ideological hostility to journalism. In my prior coverage of the Khashoggi issue, I’ve tended to emphasize the murky — but seemingly quite real and lucrative — direct financial ties between Trump’s opaque web of business interests and Persian Gulf money. The Egyptian government, of course, is not as wealthy as the oil monarchies of Saudi Arabia and the United Arab Emirates but you don’t need to be a rich country per se to pay some bribes, and Egypt is fully aligned geopolitically with the Saudi and Emirati rulers.

More to the point, we’re learning with Trump that these things can be both/and rather than either/or situations.

The essence of the Ukraine scandal is that Trump held up congressional appropriated aid to the Ukrainian government, seemingly to try to pressure officials into fabricating dirt on former Vice President Joe Biden. That’s primarily because Trump wants to beat Biden in an election. But it’s not unrelated to the fact that Trump is ideologically hostile to the underlying concept of assisting Ukraine due to his well-known, albeit still not well-explained, affection for Vladimir Putin and curious underlying sympathy for Russian geopolitical objectives.

Similarly, it’s a false choice to ask if the issue in Egypt is Trump’s disdain for journalism or his curious affection for Arab autocrats — it seems to be both.

But what the public has the right to know — and Congress has an obligation to find out — is if this extraordinary neglect of the government’s responsibility to people who are supposed to be under its protection is something that was ordered from the top and who was involved.

These allegations happen to have been publicly leveled the same evening that the dam seemed to break on House Democrats’ interest in impeaching Trump over a whole other set of wrongdoing, but the implications are incredibly serious and worthy of thorough investigation in their own right.

The coronavirus outbreak is not yet a global health emergency, WHO says
'Was that a man or a woman?' Trump mocks protester at Minnesota rally
The 18 best documentaries of 2020
Even most Republicans want to keep Roe v. Wade
Poll: Biden’s approval rating got a convention bounce. Trump’s didn’t.
Crazy Rich Asians’ mid-credits scene is brief, but very revealing