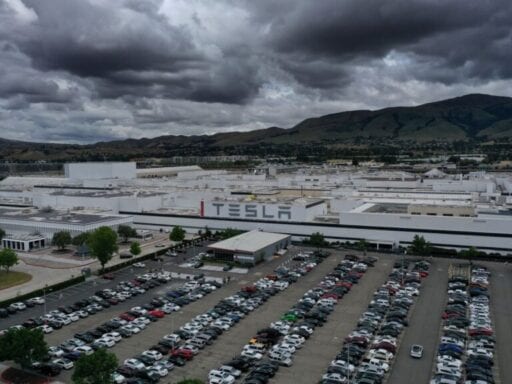 The Tesla factory in Fremont, California, reopened in May, before local officials had given the all-clear. | Justin Sullivan/Getty Images

In news that should surprise no one, workers at the Tesla factory reportedly have the coronavirus. Two anonymous workers told the Washington Post that “several cases” of Covid-19 had been confirmed at both the company’s Fremont, California, production plant and nearby at its smaller seat-assembly factory. Musk very publicly defied local officials when reopening his factories a few weeks ago.

Tesla has not yet confirmed the report, and the company did not respond to Recode’s request for comment. The Washington Post also did not say how serious the cases were, nor specify how many workers contracted the virus or when.

Still, it’s a bad look for Tesla and for Musk, the company’s founder and CEO. The company closed its factories in March after disagreements with the local Alameda County Sheriff and the Fremont Police Department. There was then a fight to reopen the factories in May, when Musk defied local health officials, Tesla sued Alameda County, and then the factories just reopened before being given the blessing to resume operations in defiance of Alameda County health orders last month. The lawsuit was later dropped.

The Alameda County Public Health Department eventually allowed the reopening of the Fremont facilities as long as Tesla agreed to certain safety measures, including having fewer workers per shift and requiring them to wear masks. The agency told the Washington Post that it didn’t know of any reported cases from the Tesla factories but did not respond to Recode’s requests for further information.

Musk has been an outspoken Twitter critic of shelter-in-place orders, calling them “de facto house arrest.” He’s also criticized the response to the coronavirus in general. On March 6, he tweeted that the “coronavirus panic” was “dumb,” following that up two days later with a tweet claiming that coronavirus’s danger had been “overstated.” A week after that, he said the panic over the virus “exceeds” the danger of the virus itself. He also openly defied shelter-in-place orders in March, telling Tesla employees that while they shouldn’t “feel obligated to come to work,” he would be there. Workers reportedly felt pressured to continue to show up for work despite Musk’s assertions that it was “totally ok” if they stayed home.

Though he did eventually close the factory and appeared to take the virus more seriously on Twitter for a while, by May he was clearly itching to get Tesla back to work, tweeting photos of ice cream sundaes and saying “life should be lived.”

Musk is likely feeling external pressure to get production up and running on Tesla’s new Model Y as quickly as possible to fulfill preorders, which have been open since March 2019. The factory’s shutdown has only delayed its ability to get the new crossover SUV on the market, and in emails leaked this week, Musk said that he would be “walking the lines” himself in order to get Model Y production up to speed.

The billionaire is also known to be a demanding boss who doesn’t, according to reports, seem particularly concerned with worker safety. In 2015, the injury rate at Tesla’s Fremont factory was 30 percent worse than the industrial average. Tesla has denied these reports and called them the work of union activists. The company was also sued in 2018 by a former safety director who claimed that he was fired after he reported unsafe conditions and inaccurate safety reporting practices to the company. (Tesla said the man was fired for “harassing workplace behavior.”)

Additionally, Musk has gotten in trouble for violating labor law in tweets and other actions that discouraged employees from forming unions. Tesla remains the only large US automaker without a unionized workforce, giving them less protection against the whims of management and little recourse against unsafe working conditions.

In the absence of confirmation from Tesla or Alameda County, it’s hard to say the extent of the virus’s spread in the factories or even when and how the infected workers contracted it. But even one sick worker shows that Musk’s strong-arming the county to get his factories back online has come with a price — even if Musk himself doesn’t have to pay it.