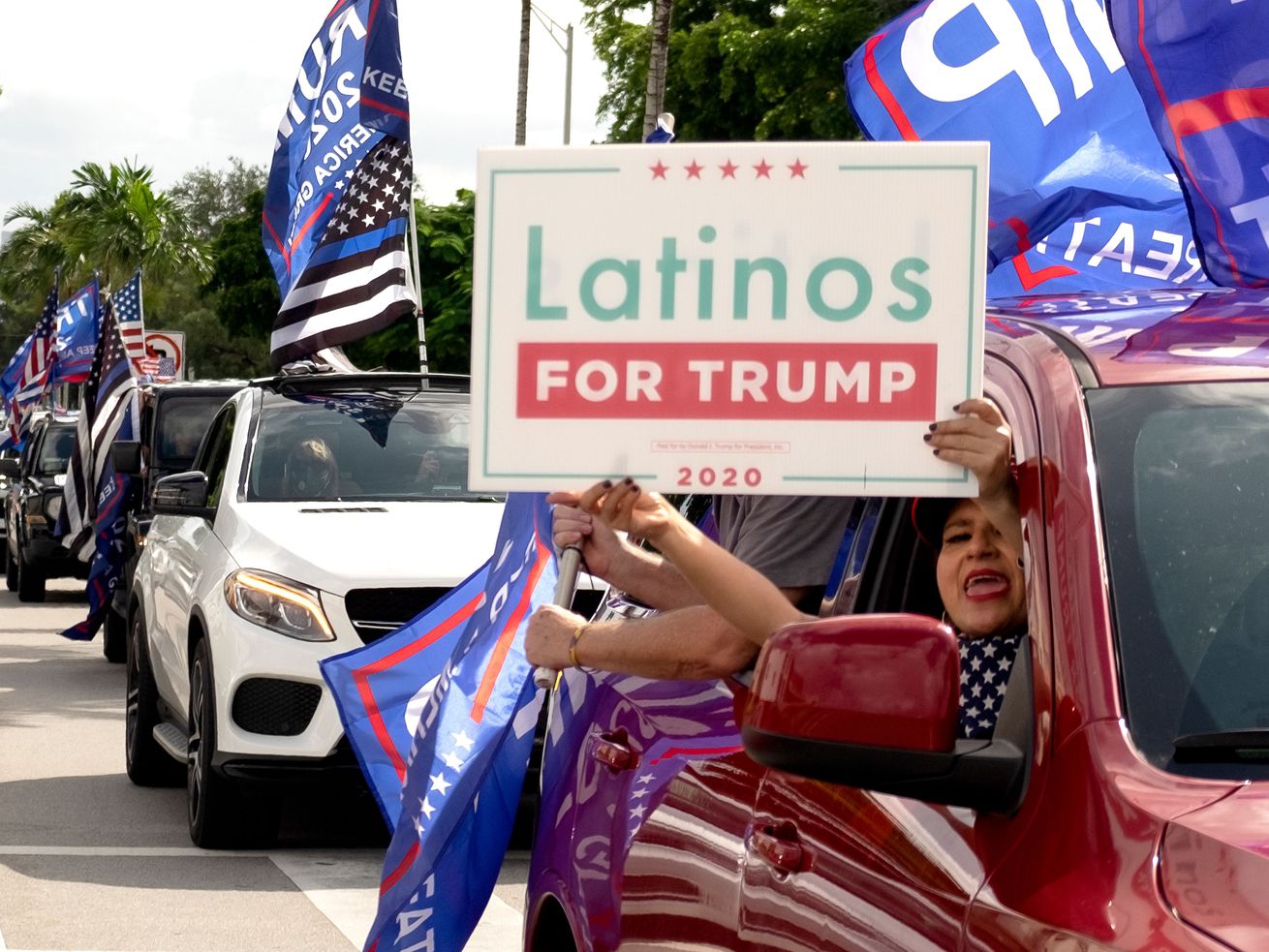 Conventional wisdom long dictated that if Latino voters show up to vote, they will overwhelmingly support Democrats. But a recent report with more details on the 2020 election results suggests the reality is more complicated.

It was clear after the election that Trump had made gains among Latino voters in places like Florida’s Miami-Dade County and Texas’s Rio Grande Valley. The newest and most detailed data yet shows that the trend was nationwide. According to a recent report by the Democratic data firm Catalist, the number of Latinos who cast votes increased by 31 percent from 2016 to 2020, accounting for a 10th of the electorate. A comfortable majority of Latinos — an estimated 61 percent — supported President Joe Biden, but there was about an 8 percentage-point swing toward Trump, based on data on votes cast for either the Democratic or Republican nominees in 2016 and 2020.

The data shows that many Latino voters, who represent the fastest-growing share of the electorate, are not firmly part of the Democratic base. Instead, they seem to be persuadable voters, presenting a potential opportunity for both Democrats and Republicans. This is especially true for voters who aren’t hyperpartisan: new and infrequent voters, as well as people who flipped their votes in 2020 or who decided to sit the election out entirely.

Democratic losses among Latinos likely already lost the party congressional seats in 2020. If Democrats are to maintain control of Congress in the midterms, sustaining and growing their support among Latinos will be key.

“Is this bad news or is this good news for the Democratic Party? The reality is that’s not knowable right now,” Michael Frias, CEO of the election data analysis firm Catalist, said. “What we know is this is a fast-growing part of the electorate, and there’s opportunity here. The race is really who’s going to invest the time, energy and attention to learn more about these voters, engage more of these voters, and really listen to them.”

Latino voters on the political margins are up for grabs

Analyses conducted in the months since the election have suggested that new voters account for a big part of Latinos’ swing toward Trump.

The Catalist report suggests these new voters operate on the political margins, meaning that they are less ideologically motivated or consistent in their preferences and could actually be more evenly split between Democrats and Republicans. They were still more likely than not to vote Democratic in 2020, but their allegiances aren’t set in stone.

“They don’t have a fully formed Democratic identity,” Carlos Odio, co-founder and senior vice president at Equis Labs, a progressive polling firm focused on Latino voters, said. “That vote was borrowed, to some extent. You have a segment of the vote that is as swingy as you get in the current moment.”

That has presented an opportunity for Republicans. Odio and his colleagues at Equis write in a recent report that Trump’s support among Latinos “grew on the margins thanks to a combination of defections and new voters — with likely a greater number of the latter.”

That worked to Trump’s benefit in the predominantly Latino south Texas borderlands, where voter participation has not historically been high, but there was a surge of new voters in 2020. As a result, Biden ended up underperforming dramatically compared with Hillary Clinton in 2016. (Though even if Biden had won the border counties in Texas by the same margins as Clinton, it wouldn’t have been enough to make up the gap between him and Trump in the state, which is still red — despite Democrats’ hopes that 2020 would be the year it would flip.)

Latinos who switched their votes, backing Hillary Clinton in 2016 and Trump in 2020, also played a role in the former president’s gains.

Chuck Rocha, a Democratic strategist who previously oversaw Latino outreach for Sen. Bernie Sanders’s 2020 presidential campaign, conducted focus groups with some of them. He said that the women in those groups, who tended to identify as independents, voted for Clinton because they wanted to see the first woman president. The men, on the other hand, associated her with her husband, former President Bill Clinton, who they believed to be good for the economy in the 1990s.

As for Trump, they gave him full credit for a robust economy prior to the Covid-19 downturn, and they didn’t blame him for mishandling the pandemic. But in most cases, they could just as well be persuaded to vote for a Democrat again.

“The good news for Democrats is that they’re all very encouraged about what they’re seeing from Joe Biden on getting the country opened back up because of vaccinations, about the stimulus checks — that went a long way,” Rocha said. “I think that 80 percent of all the Latinos that we talked to in these last focus groups could be persuaded back to vote for Joe Biden because, in their words, they’re seeing real results from his administration.”

Democrats should also be paying attention to people who haven’t participated in elections or have done so infrequently. Though there was massive growth in the number of new Latino voters in 2020, there are still many more non-voters: About half of Latino citizens of voting age did not turn out in November. That means “sky-high potential” for both parties in future elections, Odio said.

“Neither party should assume that a Hispanic voter who cast a ballot for Trump in 2020 is locked in as a Republican going forward. Nor can we assume this shift was exclusive to Trump and will revert back on its own,” the Equis report states. “And if there’s a lesson for the future, it is to watch the margins and those voters who often remain invisible: the ones who stayed home and the many others aging into the electorate. After all, no two electorates are the same.”

Biden is engaging Latinos well ahead of the midterms

Though Biden was accused of doing too little, too late to reach out to Latino communities on the campaign trail, he is engaging with them well ahead of the midterms. In addition to passing legislation that will make a difference in the lives of Latinos, Biden’s camp has invested in paid communication through his outside organization Building Back Together, which has launched TV commercials in English and Spanish to promote his agenda in swing states.

The organization’s “100 Dias” ad, launched May 5, is part of what it calls an “always-on” communication initiative targeting Latinos.

“Joe Biden is supporting and signing legislation to put shots in arms, money in your bank account and to create millions of jobs, and then he’s going out and talking about that around the country,” Rocha said. “This early communication to these voters is pure gold to a political strategist like me who concentrates on this because this gives me a basis of my argument of why Democrats are better than Republicans.”

Rocha, who had warned that Latinos could present a weak spot for Biden last fall, said that the president and his supporting organization are now doing “exactly what they should be doing, which is spending money early to talk to Latinos.”

But he can’t say the same of Senate and House campaigns ahead of the midterms. In 2020, only one of the top 50 congressional, Senate, and gubernatorial campaigns targeted by Democrats had a Latino manager, and no Latino firms were doing TV or radio communications for them, he noted.

Of the 14 congressional seats that flipped from Democrat to Republican in Oklahoma, Florida, New Mexico, California, and Utah, eight were in districts where the population is at least 17 percent Hispanic. For example, former Democratic Reps. Gil Cisneros and Harley Rouda narrowly lost their Southern California seats in districts that are 33 percent and 21 percent Hispanic, respectively.

Rocha worries that down-ballot candidates will fall back into the trap of spending money too late in the game, failing to hire Latinos to advise them, and treating Latino voters as an afterthought.

“I’ve been doing this for 30 years, and I’ve never seen the DCCC and the DSCC get engaged in how to fix the Latino vote this early,” Rocha said.

But campaigns themselves aren’t doing enough, he said. They’re focused on creating field operations to knock on doors in Latino neighborhoods and get out the vote, but they aren’t pursuing a multi-layered persuasion strategy that involves TV and digital ads, mailings, texting, and direct advertising on platforms like Hulu or Pandora, as they would with white voters. Trump did that in Miami-Dade County, and it worked.

“That’s where you lose the cultural competency because they just have the same white consultants and white managers that the state party and other local operators tell them to hire,” he said. “That’s where the biggest worry is. Because we’ve always been tagged wrongly as a segment of the electorate who ‘don’t vote,’ it’s just not a big priority to local and state campaigns who don’t really understand our community that well.”

Democratic leaders, therefore, must set an agenda that prioritizes Latino voters in the hope that state and local campaigns will follow suit, or else they risk backsliding in the years to come.

“Stop taking broad communities for granted. It has to be earned,” Frias said. “And it’s hard work to keep up communication and engagement with voters year-in, year-out, outside of election cycles and in election cycles. But there is enough money in politics to be able to have those conversations continuously.”

Trump’s plan to weaponize the census against immigrants has failed
The hugely influential — and complicated — California primary, explained
Bobby Brown denies ever having hit Whitney Houston: “The public record is wrong”
The “pleasant ambiguity” of Medicare-for-all in 2018, explained
America still doesn’t have enough N95 masks
How the Libertarian Party (maybe) helped shift the presidential race