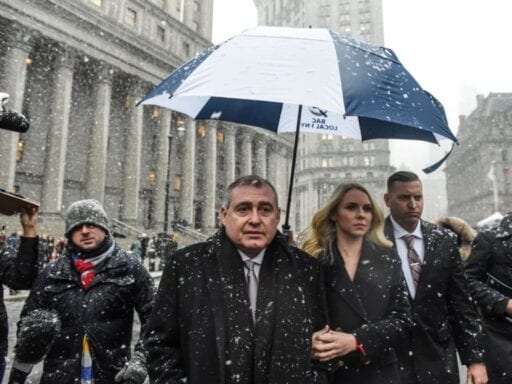 Following his arrest on campaign finance violation charges, Parnas began providing the committee with a body of notes, photographs, and cellphone data as part of President Donald Trump’s impeachment proceedings. These documents have been made public in tranches; earlier releases further defined Giuliani’s role in the push for a Ukrainian investigation into Joe Biden, and included messages that seemed to suggest a Republican congressional candidate had former US ambassador to Ukraine Marie Yovanovitch under surveillance.

In recent days, Parnas has mounted a concerted push to shed light on outstanding questions related to the president’s pressure campaign — which sought to trade first a White House meeting, and later critical military aid for an investigation into Biden, his son Hunter, and the Democratic Party. Wednesday, he appeared on MSNBC to claim Trump knew “exactly what was going on” with respect to Giuliani’s efforts to advance a Biden investigation, and claiming that Vice President Pence and Attorney General William Barr were involved as well.

Parnas claimed last November that Nunes was also party to the pressure campaign, and that he’d worked with one of the lawmaker’s top aides, former White House official Derek Harvey, to keep the congressman in the loop about the progress of the quid pro quo scheme.

The messages released Friday would seem to support these allegations, and to suggest Nunes, who was a vocal defender of Trump throughout last year’s impeachment inquiry hearings, may have been more involved in the administration’s efforts in Ukraine than he’s admitted to — despite his consistent denials about having any real role in the scandal.

Messages between Harvey and Nunes show meetings at a Trump hotel, and coordination on witness interviews

A string of messages between Parnas and Harvey from April 17 to 19, 2019 show the two men trying to set up interviews with Ukrainian officials such as disgraced former prosecutor Viktor Shokin, a Biden critic who was fired at the request of a number of Western governments, and Yuri Lutsenko, who asked for Yovanovitch to be fired in exchange for dirt on Burisma or Biden, according to recent documents released from the House Intelligence Committee.

Harvey and Parnas worked closely together to plan out the logistics of the interviews: after informing Parnas about prepping a Nunes staff lawyer, Harvey asks for “suggested lines of questions” and the “full names of who we will interview.” Parnas responds that he will put both together.

After two days, however, Harvey puts a halt on the interview process and says they would be “best served by sending the official letter and receiving documentation before any more interviews.”

A number of letters were eventually sent to Ukrainian officials, including a letter Giuliani sent to then President-elect Volodymyr Zelensky in May in which he requested a meeting. By the time that letter was sent, Giuliani had begun to publicly state he planned to dig up dirt on Joe Biden in Ukraine.

In addition to the coordination with the interviews, the messages also appear to show Harvey meeting Parnas at the Trump hotel in Washington, DC, and taking part in private meetings with Giuliani and conservative journalist John Solomon, whose work (some of it based on recanted information) helped convince Trump of the veracity conspiracy theories featuring Ukraine, Democrats, and Joe Biden. Parnas claimed last year that Harvey took part in these meetings, and the messages do seem to place him there.

Nunes’s aide also passed along the lawmaker’s contact information to Parnas on April 10 — two days before House records show that the two talked for eight minutes on the phone, according to NBC News.

All of this aligns with what Parnas has said so far: he told MSNBC’s Rachel Maddow on Wednesday night that he had met Nunes several times and that the congressman worked with Harvey to dig up dirt on Biden. He had also said he was surprised to see Nunes as a leader in the impeachment inquiry because “he knew very well that he knew what was going on.”

Nunes, who had denied any knowledge about his phone call with Parnas, appeared on Fox News on Thursday to say that he remembered having and “odd” and “random” phone call with Parnas, according to The Daily Beast. He’d initially claimed he hadn’t spoken to Parnas, then that he’d actually talked with the fixer’s wife. Now Nunes claims he did speak to Parnas, but that he quickly pushed him off on his staff, “which is normal, standard operating procedure.”

This, however, is a position he might not be able to maintain for much longer, especially as Parnas becomes more vocal in the impeachment process. The close associate of Giuliani was essential in connecting US officials with Ukrainian sources, and thus has a lot to tell.

It is true that Parnas’s credibility is somewhat in question, but he has been able to produce evidence that seems to support his version of events. And given his indictment, he has reason to cooperate with officials in order to demonstrate that regardless of his guilt or innocence in that case, that he is someone who now operates with the truth and public good in mind.

Despite increasing evidence to the contrary, Nunes, still denies having any contact with Ukrainian officials or working to dig up dirt on Trump’s political rivals. To make his point clear, he even sued CNN for $435 million for publishing a story that he met with Shokin in search of damaging information on Biden — a report he described as a “demonstrably false hit piece.” For his part, Parnas has claimed Nunes met with Shokin in Vienna in December 2018.

Last December, Nunes threatened to sue fellow congressman Rep. Ted Lieu (D-CA), who alleged last year that Nunes was working with Parnas on Ukrainian matters, stating that he had an “‘absolute’ right to an unimpaired reputation.”

Lieu posted the threat from Nunes along with his own response dated Thursday: “It is true that I stated Congressman Nunes worked with Lev Parnas and conspired to undermine our own government.”

Attached is the first page of a five page letter in which the lawyer for @DevinNunes threatens that Rep Nunes will sue me.

Attached is my response. pic.twitter.com/bWAqdRhq97

“I welcome any lawsuit from your client and look forward to taking discovery of Congressman Nunes,” Liu continued. “Or, you can take your letter and shove it.”

Lieu pointed to Parnas’s interview with Maddow as proof of Giuliani’s former associate’s relationship with Nunes. Parnas told Maddow Wednesday night that he was shocked to see Nunes deny Trump’s efforts to dig up dirt on his political rivals in Ukraine because he was “involved in getting all this stuff on Biden,” according to MSNBC.

“[I]t’s hard to see them lie like that,” Parnas said, speaking of Nunes’s work in the impeachment inquiry hearings. “It’s scary because, you know, he was sitting there and making all statements and all that when he knew very well that he knew what was going on. He knew what’s happening. He knows who I am.”

Nunes has already faced one ethics investigation in recent years, and questions of his involvement in Trump’s Ukraine scheme could lead to another. Some of his colleagues, including Democratic Rep. Adam Smith, have called for officials to take a closer look at Parnas’s allegations.

Whether an investigation is launched remains to be seen, but Parnas has signaled he has no plans to stop talking about his ties to Nunes — and the release of Friday’s evidence will only complicate Nunes’s efforts to distance himself from the affair.

Beyond the Parnas-Harvey communications, the new documents also contain messages between Giuliani and Parnas that appear to affirm the closeness of their relationship — Parnas tells Giuliani in one exchange, “Just need to talk to you before I go to sleep by brother” — and that show Giuliani helping to connect Parnas to John Dowd, a former lawyer for the president.

Too, they contain a number of photos that attempt to link Parnas to both Giuliani and Trump; they include pictures of Giuliani golfing and riding a boat, as well as photos of Parnas with the president and with his son, Donald Trump, Jr.

President Trump has claimed in the past that he doesn’t know Parnas, and dismissed pictures of the two together as quick photo ops, saying on Thursday he poses with “thousands of people including today that I didn’t meet.”

“I don’t know who this man is,” Trump said. “Oftentimes I’ll be taking a picture with somebody and say, I wonder what newspaper that one will appear in. I don’t know him. Perhaps he’s a fine man. Perhaps he’s not. I know nothing about him.”

Parnas has argued the sheer number of photos he has with Trump — including of pictures of them sitting together at events — tells a different story. And he told CNN he has many pictures with the president he has yet to share, saying of Trump’s denials: “I welcome him to say that even more. Every time he says that I’ll show him another picture. He’s lying.”

Finally, the documents have raised new questions about Yovanovitch

The first tranche of documents revealed a Republican congressional candidate named Robert Hyde was in contact with Parnas about former US ambassador to the Ukraine Marie Yovanovitch. Hyde told Parnas he’d placed Yovanovitch — who was told she was recalled from Ukraine for her “security” — under surveillance.

Screenshots from WhatsApp conversations Hyde had with an individual with a Belgian phone number included in the latest release have shed a bit more light on those claims.

NBC has identified that individual as Anthony de Caluwe, based on the digits visible in their phone number, their WhatsApp profile picture, and conversations with Hyde. Hyde has also claimed on Twitter the Belgian number belongs to de Caluwe. De Caluwe told NBC Hyde contacted him, but that he refused to help him.

The screenshots show a conversation that mirrors messages released earlier in the week that suggest Hyde had Yovanovitch under surveillance, and that those who were watching her had the capacity to do her bodily harm. It would appear that Hyde copied and pasted some of the messages he received from the Belgian number in his conversation with Parnas, including two that read “It’s confirmed we have a person inside” and “Hey broski tell me what we are doing what’s the next step.”

These would seem to suggest that Hyde — or his associate with the Belgian number — had some sort of asset within the US embassy, and that this surveillance was being guided by Parnas or Giuliani.

Parnas has said he did not direct any sort of surveillance operation — and the records released so far show that he did not respond to these messages. He has also said he believed Hyde to be bluffing about the surveillance, calling him a “a weird individual” who is constantly drunk.

Hyde has pushed back against the messages as well, claiming he was “absolutely not” threatening Yovanovitch. In a Twitter video Friday, Hyde called the messages “just copy and paste bullshit from some intel guy — probably that was fucking with me.”

Nevertheless, Ukrainian officials have opened an investigation into the matter, and Friday, Secretary of State Mike Pompeo said the US would also investigate the matter.