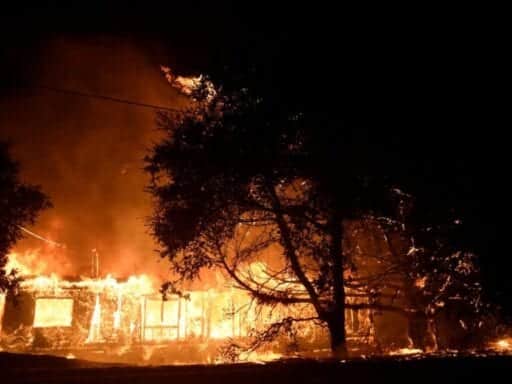 More blazes ignited this week, but power companies are starting to restore electricity to thousands of customers.

Even more wildfires have ignited in California this week, amid high winds and dry weather, despite massive ongoing firefighting efforts and power shutoffs to hundreds of thousands of customers throughout the state in hopes of preventing an ignition.

Here is a look at the #EasyFire from the Ronald Reagan Presidential Library in Simi Valley:https://t.co/zVIZselbnD pic.twitter.com/EGAXTkZG0i

Meanwhile, firefighters continue to battle other major wildfires throughout the state. The Getty Fire ignited near the eponymous modern art museum in Los Angeles early Monday morning and rapidly spread over 745 acres — encroaching on the 405 Freeway, one of the city’s most important traffic arteries. Though it’s one of the smaller fires, it’s threatening the state’s most populated county. The Getty Fire triggered mandatory evacuations for more than 10,000 homes, destroyed at least eight houses, and forced some to flee in the middle of the night. It was 52 percent contained as of Thursday evening. Officials believe the blaze was ignited by a tree branch hitting a power line.

Man these LA aren’t no joke. Had to emergency evacuate my house and I’ve been driving around with my family trying to get rooms. No luck so far! ‍♂️

In Santa Clarita, the Tick Fire has torched 4,615 acres, forced 50,000 residents to evacuate, and caused schools to close due to air-quality concerns. The blaze was 95 percent contained as of Wednesday and evacuation orders have now been lifted.

Fire officials also reported that the Saddleridge Fire near Los Angeles, which ignited two weeks ago, is 97 percent contained after burning 8,799 acres. The Hillside Fire in San Bernadino was 50 percent contained on Thursday, after spreading across 200 acres.

In Northern California’s Sonoma County, a much less densely populated region known for its vineyards, the Kincade Fire has burned through more than 77,000 acres and was 65 percent contained as of Thursday evening. It’s the largest blaze in the history of the county and has already destroyed 96 structures and forced 200,000 people to flee. (The California Department of Forestry and Fire Protection has a map of many of the current major fires throughout the state.)

The recent blazes have sent choking smoke and ash over some of the state’s most densely populated areas, like Los Angeles County and the San Francisco Bay Area, degrading air quality and causing dangerously unhealthy levels of air pollution.

Earlier in the week, the National Weather Service warned that “extremely dangerous fire weather conditions” were in effect. Forecasters are now expecting winds to slow down and temperatures to drop, but humidity throughout the state will likely remain low, maintaining dry conditions.

And after days of sporadic blackouts for almost 1 million customers over concerns that high winds could bring trees into contact with power lines and spark a new blaze, power utilities are starting to switch the lights back on.

California’s power shutoffs are a desperate attempt to stop new fires, but power is coming back

PG&E, the utility serving Northern California that was found liable for starting several major fires, conducted several rounds of public safety power shutoffs — deliberate blackouts — to reduce fire risk. More than 940,000 customers lost power over the weekend. Some customers, including medical facilities that depend on electricity to refrigerate medicine and run vital equipment, lost power for days. Even clinics with backup generators had to ration their power use and people who rely on home medical devices had to evacuate, highlighting again how power shutoffs hit the most vulnerable the hardest.

Southern California Edison, which provides power to the southern part of the state, had shut off power to more than 15,000 customers earlier this week. On Friday, the number dwindled to 1,100 customers without electricity.

Vox’s David Roberts has explained, at length, the factors that led these utilities to undertake such drastic action and why California is likely to experience these shutoffs again. It will take years for better land management practices, new housing policies, and upgrading power infrastructure to reduce the overall fire risk. In the meantime, California faces the prospect of more fires or even more drastic actions to prevent them.

Why wildfire risk in California is so high right now

Though 2019 has been a much less active fire year for California compared to the record-breaking fire seasons of 2017 and 2018, the risk for a severe blaze remains high due to recent weather and long-term trends.

Seasonal winds — the Diablo winds of Northern California and Santa Ana winds in the southern part of the state — picked up strength this week, helping blazes spread. The weather in California this week was also hot and dry, with humidity below 9 percent in much of the state.

There is also plenty of vegetation ready to burn: a wet winter and spring this year caused a bumper crop of grasses and shrubs, followed by an extremely hot summer that turned this vegetation into tinder.

It’s important to remember that wildfires are a natural part of many ecosystems in California, restoring nutrients to soils, regulating growth in forests, and even helping some plants germinate.

But the drivers of the growing fire risk in California are due to human-caused factors, which have been mounting for decades.

For one thing, Californians have built homes in fire-prone regions as the state’s housing crunch forced people away from major cities. This raises the likelihood of sparking a fire. About 84 percent of wildfires are now ignited by humans, whether from downed power lines, neglected campfires, errant sparks, or arson. This proximity also increases the ensuing damage with so much more property in harm’s way.

Reports indicate that the Kincaid Fire started in The Geysers, the largest geothermal electricity facility in the world. A transmission line operated by Pacific Gas and Electric reported problems shortly before the fire began, and firefighters found power equipment that wasn’t shut off at the time even though the utility was deliberately cutting power to some areas to reduce the risk of igniting a fire.

Years of suppressing natural fires have paradoxically allowed vegetation to build up to unnatural levels. That means that when a fire does occur, it can burn with greater speed, range, and intensity.

People are also causing climate change. That has contributed to Western forests drying out as average temperatures rise. It has also exacerbated the impacts of California’s years-long drought. These stresses have left trees vulnerable to pests like bark beetles, which can rapidly kill a distressed tree. Together, these factors have led to the deaths of 149 million trees in California. Hotter, drier conditions over the long term will only worsen the fire risk.

Californians are taking steps to reduce these fire risks, but the challenge is immense and some of the tactics have proved controversial. Last week, the US Forest Service began a controlled burn in Butte County, the site of 2018’s Camp Fire, the state’s deadliest and most destructive wildfire — which ignited more than 150,000 acres. The controlled burn is only over 300 acres, which means there’s still vastly more wilderness area that may need this treatment. Controlled burns also pose air-quality risks and aren’t themselves foolproof: In the past decade, states like Colorado, Montana, and California have seen prescribed burns spread out of control and threaten homes.

Gov. Newsom earlier this year signed an emergency order to speed up forest thinning near high-risk communities. But environmental activists have criticized this policy because it reduces the time allotted to environmental reviews of these projects. Some activists also oppose logging as a tactic for reducing fire risk, arguing instead for more fire-resistant building codes and defensible spaces around homes.

It shows that California’s fire risk is an enormous technical and political problem. There are no easy answers, and more difficult decisions over who gets to live where, what tactics to pursue, and who has to pay, lie ahead.

More than 500,000 people have RSVP’d to “storm Area 51,” in the name of memes
These 3 Senate Republicans could help decide the fight over the rules of the impeachment trial
6 months of Trump’s excuses for not doing an interview with Mueller: a timeline
Colorado baker who refused to serve gay couple now wants to refuse to serve transgender person
The United Nations is trying to pressure the world into faster action on climate change
Voting in person is roughly as safe as going to the grocery store