New Hampshire primary turnout was good for Democrats — sort of 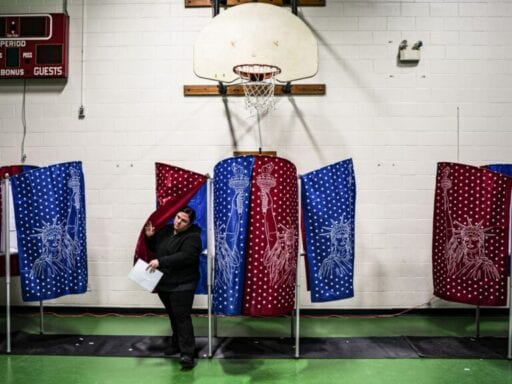 With no competitive Republican race, independent voters were free to focus on the large Democratic field.

One of the key measures of voter enthusiasm in a primary is turnout numbers — and New Hampshire’s voters showed up on Tuesday.

That’s some good news for Democrats hoping to win back the White House this fall. Low turnout in the Iowa caucuses last week produced some handwringing among political observers who wondered whether Democrats had the organization and ambition to defeat Trump. Those fears should be allayed by New Hampshire voters.

With just over 90 percent of precincts reporting Wednesday morning, 285,680 votes were cast in the Democratic presidential primary, far outpacing the 254,780 ballots cast in 2016. Turnout in the state was similar to that of 2008, when primary participation set records nationwide and 288,672 votes were cast in New Hampshire.

The number is particularly noteworthy given the lower than expected turnout in the Iowa caucuses last week.

Before Tuesday’s primary, New Hampshire Secretary of State Bill Gardner predicted that 292,000 votes would be cast in the Democratic primary, and his prediction is looking fairly accurate at this point. That number, compared with 2016’s turnout, exceeds the state’s population growth, which could show a particularly enthusiastic Democratic electorate for this year’s election in a key general election swing state.

Still, there’s an important caveat: In New Hampshire, voters not registered with a party can vote in either primary, but registered Republicans or Democrats must vote in their respective primaries. In 2016, for example, 284,120 votes were cast in a nine-candidate Republican race, compared to just 124,000 on the GOP side this year, with 96 percent of precincts reporting. With a virtually uncontested Republican primary this year (although about one in 10 voters picked Bill Weld, who’s challenging Trump the nomination), independents in the state were free to focus on the Democratic race.

Bad news: NH has a semi-open primary where undeclared voters can vote in a party primary. Dem turnout bolstered by uncompetitive Rep primary

However, an NBC News exit poll showed that 43 percent of the Democratic primary electorate in the state were independents, only slightly up from 40 percent in 2016, which would seem to suggest that there wasn’t a big influx of independents who voted on the Republican side in 2016 and switched to the Democrats this time around.

One reason for the increased turnout might be that the candidate field was simply bigger.

In 2016, New Hampshire was a two-way race between Vermont Sen. Bernie Sanders and eventual nominee Hillary Clinton. In 2008, Clinton faced off with Barack Obama while John Edwards’s campaign was in the early stages of its death throes. This year’s race featured a competitive Democratic race with a much larger field of candidates. In total, there were 10 campaigns organizing and canvassing all over the state for Tuesday’s contest. Sen. Bernie Sanders’s campaign alone said it managed to knock on the doors of 20 percent of the state’s residents in the closing days of the race.

Why Starbucks, Seattle, and Tom Brady are all shunning plastic straws
John Bolton’s impeachment bombshell, explained
The Black List’s Franklin Leonard says greed can combat Hollywood’s bias
Domestic terrorism is on the rise. Why won’t cable news networks say so?
Super Typhoon Yutu, the strongest storm of the year, just hit US territories
The power of Greta Gerwig’s Little Women is that it doesn’t pretend its marriages are romantic