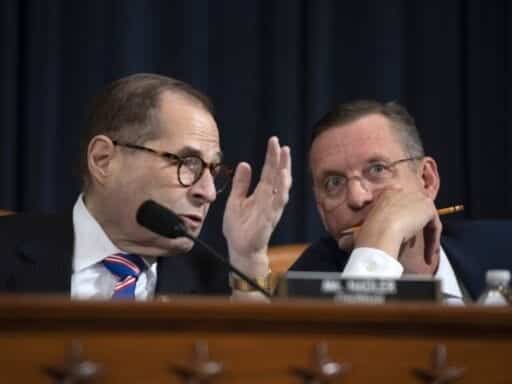 Ahead of the release of articles of impeachment, Democratic lawmakers explain what they believe the Constitution states are impeachable offenses.

The House Judiciary Committee concluded the first week of its public hearings in the impeachment inquiry into President Donald Trump by releasing a report summarizing its findings so far on Saturday.

The 52 page report, authored by staffers of the Democratic members of the committee, is a condensed version of the testimony of four legal experts who answered questions before the committee Wednesday. In their testimonies, those experts worked to explain what constitutes an impeachable offense according to the Constitution. The report also serves as a rebuttal to common Republican critiques of the impeachment inquiry thus far — largely by making the case a president does not need to commit a crime to be impeached, and by arguing the inquiry thus far has proceeded as legally defined.

The committee hoped to arrive at a concrete definition of impeachable offenses in order to provide a basis for the writing of articles of impeachment; those articles are traditionally authored by the Judiciary Committee, and House Speaker Nancy Pelosi charged impeachment inquiry leaders with crafting those articles last week.

Article Two, Section 4 of the Constitution spells out impeachable offenses like this: “The President, Vice President and all civil Officers of the United States, shall be removed from Office on Impeachment for, and Conviction of, Treason, Bribery, or other high Crimes and Misdemeanors.”

Treason is defined very clearly in the Constitution. Bribery, high crimes, and misdemeanors are not, and have been the subject of debate among legal scholars, including during Wednesday’s hearing.

The report’s authors state that this continuing debate is the reason for the report’s existence; the impeachments of Richard Nixon and Bill Clinton used documents similar to this report to define when and why a president should be impeached. Those reports, the authors write, “no longer reflect the best available learning on questions relating to presidential impeachment,” and therefore, this report will form the foundation of the articles of impeachment to come.

For the purposes of this inquiry, the report defines treason, bribery, high crimes, and misdemeanors in turn.

The president is unlikely to face any accusations of treason in the articles of impeachment; mostly because the Constitution defines treason as giving “Aid and Comfort” to a country the US is at war with, as the report explains:

Under Article III of the Constitution, “treason against the United States, shall consist only in levying War against them, or in adhering to their Enemies, giving them Aid and Comfort.” In other words, a person commits treason if he uses armed force in an attempt to overthrow the government, or if he knowingly gives aid and comfort to nations (or organizations) with which the United States is in a state of declared or open war.

While an argument could be made Trump’s actions with respect to Ukraine benefitted Russia, a US adversary, the two nations are not at war, making treason not particularly relevant to the current inquiry.

Bribery, on the other hand, is something Democratic leaders have accused Trump of, arguing that trying to pressure Ukraine into launching an investigation into his rivals by withholding first a coveted White House meeting, and later, military aid constitutes bribery.

The report defines this offense as such:

The essence of impeachable bribery is a government official’s exploitation of his or her public duties for personal gain. To the Framers, it was received wisdom that nothing can be “a greater Temptation to Officers [than] to abuse their Power by Bribery and Extortion.” To guard against that risk, the Framers authorized the impeachment of a President who offers, solicits, or accepts something of personal value to influence his own official actions. By rendering such “Bribery” impeachable, the Framers sought to ensure that the Nation could expel a leader who would sell out the interests of “We the People” to achieve his own personal gain.

House Intelligence Committee chairman Rep. Adam Schiff — who led the first phase of the impeachment inquiry — told NPR recently, “I don’t think there’s any question that the uncontested facts show this president solicited a bribe.” Other top Democrats, like Pelosi, have made similar statements, and reporting has suggested at least one article of impeachment will focus on bribery.

The final impeachable offenses — high crimes and misdemeanors — are perhaps the vaguest. And the report acknowledges it would “be an exercise in futility to attempt a list of every conceivable abuse constituting ‘high Crimes and Misdemeanors.’” Rather than doing so, it draws upon the writings of the Constitution’s authors, those of legal scholars, and the testimonies of Wednesday’s experts to broadly define those offenses as acts that involve abuse of power, betrayal of the nation, and outright corruption.

Obviously, those concepts, despite being more specific and familiar that the terms high crimes and misdemeanors, are also broad, and so the report works to define them as follows.

Abuse of power was no vague notion to the Framers and their contemporaries. It had a very particular meaning to them. Impeachable abuse of power can take two basic forms: (1) the exercise of official power in a way that, on its very face, grossly exceeds the President’s constitutional authority or violates legal limits on that authority; and (2) the exercise of official power to obtain an improper personal benefit, while ignoring or injuring the national interest. In other words, the President may commit an impeachable abuse of power in two different ways: by engaging in forbidden acts, or by engaging in potentially permissible acts but for forbidden reasons (e.g., with the corrupt motive of obtaining a personal political benefit).

Betrayal it describes as being:

Where the President uses his foreign affairs power in ways that betray the national interest for his own benefit, or harm national security for equally corrupt reasons, he is subject to impeachment by the House. Any claims to the contrary would horrify the Framers. A President who perverts his role as chief diplomat to serve private rather than public ends has unquestionably engaged in “high Crimes and Misdemeanors”— especially if he invited, rather than opposed, foreign interference in our politics.

And corruption is described in detail, with examples of how foreign nationals and US citizens might tempt the president to misuse their power. Overall, the report states the Constitution’s authors were most concerned with two types of corruption:

The Framers discussed the risk that Presidents would improperly conspire with foreign nations; they also discussed the risk that Presidents would place their interest in retaining power above the integrity of our elections. Both offenses, in their view, called for impeachment. That is doubly true where a President conspires with a foreign power to manipulate elections to his benefit—conduct that betrays American self-governance and joins the Framers’ worst nightmares into a single impeachable offense.

These concepts are likely to inform at least one other article of impeachment centered on abuse of power, arguing — to use the language of the report — that Trump engaged in the “exercise of official power to obtain an improper personal benefit, while ignoring or injuring the national interest.” House Democrats may also claim Trump used “his foreign affairs power in ways that betray the national interest for his own benefit” (or, engaged in betrayal) and that he did so in a way that qualifies as corrupt as described above.

Exactly when the articles of impeachment will be released is not yet clear. House lawmakers have until December 20 to vote on them — as of now, that is the final day of the 2019 legislative calendar. This would give lawmakers roughly two weeks to write and vote on articles. Democrats have signaled they are inclined to move quickly to end the House phase of impeachment, meaning the articles could appear as early as next week.

In defense of the New York Times’s anonymous Trump official
One Good Thing: FX’s A Teacher depicts a teacher and student’s affair with pain intact
Trump’s “PRESIDENTIAL HARASSMENT” tweets are an insult to #MeToo
The police killing of Rayshard Brooks at a Wendy’s drive-through, explained
Facebook bans QAnon (again)
The best $500 I ever spent: My autism diagnosis