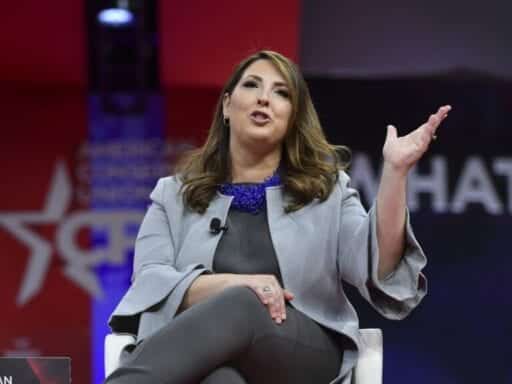 Trump expressed hope that the Senate would confirm one of his nominees. Days later, the RNC came calling for cash.

Wealthy donors being rewarded with cushy ambassador gigs is not a new development in American politics, nor is it a uniquely Republican form of pay-to-play. But as with many things pertaining to the current occupant of the White House, President Donald Trump and his Republican backers have taken things in this realm to a whole new level of unseemliness.

According to a new CBS investigation, while Trump’s nomination of San Diego billionaire/campaign donor Doug Manchester to be the ambassador to the Bahamas was held up in the Senate in early September, RNC chair Ronna McDaniel sent Manchester an email that alluded to what seems to be a corrupt quid pro quo.

“Would you consider putting together $500,000 worth of contributions from your family to ensure we hit our ambitious fundraising goal?” McDaniel wrote.

McDaniel’s plea for cash came just three days after Trump expressed hope on Twitter that the Senate could confirm Manchester’s nomination. (Manchester owns a home in the Bahamas and assisted with the Hurricane Dorian relief effort.)

….I would also like to thank “Papa” Doug Manchester, hopefully the next Ambassador to the Bahamas, for the incredible amount of time, money and passion he has spent on helping to bring safety to the Bahamas. Much work to be done by the Bahamian Government. We will help! @OANN

An RNC spokesperson told CBS that McDaniel “did not suggest to Mr. Manchester in any way that it would more quickly advance his confirmation if members of his family made a political contribution.” But the timing of her personalized email pitch to Manchester — coming as it did just days after Trump expressed hope that he would be approved as ambassador to the Bahamas — is a terrible look at best, and appallingly corrupt at worse. And suffice it to say that Manchester’s response did not help matters.

In an email sent to McDaniel that also copied staffers working for two Republican senators who sit on the Foreign Relations Committee that controlled his nomination — Rand Paul (KY) and Jim Risch (ID) — Manchester replied to McDaniel by saying his wife was donating $100,000 immediately, and he promised more if approved for the ambassadorship.

“As you know I am not supposed to do any, but my wife is sending a contribution for $100,000. Assuming I get voted out of the [Foreign Relations Committee] on Wednesday to the floor we need you to have the majority leader bring it to a majority vote … Once confirmed, I our [sic] family will respond!” he wrote, according to emails obtained by CBS. (The RNC spokesperson told CBS that Manchester’s “decision to link future contributions to an official action was totally inappropriate” and claimed the donation made by his wife was returned.)

Alas, Manchester’s nomination did not make it out of committee. According to CBS, the Risch staffer who was copied on Manchester’s email alerted the White House about the apparent pay-to-play scheme. Manchester, perhaps feeling pressure to do so, officially said he was no longer interested in becoming ambassador to the Bahamas last month.

Given that the whole episode unfolded in writing, both Manchester and the White House may have felt like there was little choice but to pull the plug. Not only is the sort of pay-to-play outlined in the emails unethical, but it’s also arguably illegal, as soliciting or receiving payments for public offices violates federal law.

Manchester isn’t the first wealthy Trump donor to land himself in hot water after donating $1 million to Trump’s inaugural fund. Gordon Sondland, who became Trump ambassador to the European Union after donating the same amount, has become a key witness in the impeachment inquiry about Trump’s dealings in Ukraine. Sondland even put himself at risk of perjury by revising his original testimony to congressional impeachment investigators in a manner that suggests he had been trying to protect the president until testimony from other witnesses made his position untenable.

Sondland made his fortune as a hotel magnate. Manchester made his in real estate. Neither had any diplomatic experience before they were nominated to ambassador positions by Trump. Both now find themselves at the center of scandals. It’s no wonder that Democratic senator and presidential candidate Elizabeth Warren has made no longer allowing campaign donors to become ambassadors a centerpiece of her plan to revamp the State Department.

But the Manchester scandal isn’t just one about pay-to-play gone wrong — it’s also one about the ongoing shadiness of the RNC. Already this year the committee has come under fire for accepting hundreds of thousands of dollars from casino mogul Steve Wynn, who last year resigned from his position as finance chairman of the RNC amid a string of allegations of sexual misconduct. That McDaniel was willing to brazenly hit up Manchester for half a million bucks while his ambassadorial nomination hung in the balance indicates that for her committee, the ends continue to justify the means.

Vox Sentences: The far-right White House guest
It’s not overreacting to prepare for coronavirus. Here’s how.
Shel Silverstein’s extremely cozy houseboat is for sale
Do Americans still believe in their democracy?
Americans’ approval of Pope Francis drops to 53% amid more church sex abuse revelations
The abandoned asylum seekers on the US-Mexico border