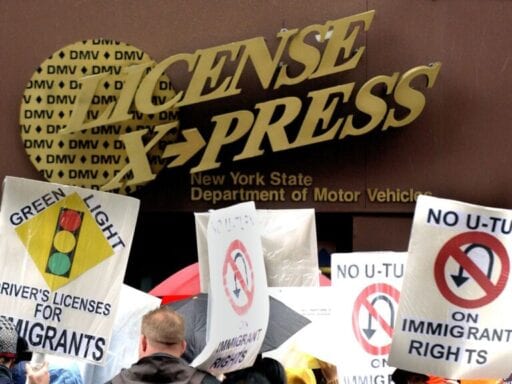 Almost 50% of unauthorized immigrants nationwide can now apply for a driver’s license.

Gov. Phil Murphy, a Democrat, is expected to sign the bill passed by the New Jersey Legislature on Monday night. The legislation would create two forms of driver’s licenses: a federally compliant Real ID license that let people board planes, and a “standard” driver’s license for driving and identification, for which unauthorized immigrants could use foreign passports or driver’s licenses to apply rather than a Social Security number. If signed, the bill would go into effect in January 2021.

Research suggests that making driver’s licenses available to unauthorized immigrants improves safety. Obtaining a license requires testing and training on road safety, as well as proof that an applicant can get auto insurance. Drivers with licenses are also more willing to cooperate with law enforcement, reducing burdens on police forces.

A 2016 study published in the Proceedings of the National Academy of Sciences journal found that after California implemented its driver’s license law in 2015, hit-and-runs dropped between 7 percent and 10 percent on average — amounting to roughly 4,000 fewer such accidents annually.

Such policies also have financial benefits, both for local governments and for drivers. The Fiscal Policy Institute found in 2017 that state and county governments could collect about $57 million in annual revenue, as well as $26 million in one-time revenues, by issuing 150,000 driver’s licenses to unauthorized immigrants in New York City. The researchers also determined that it would likely lower auto insurance premiums overall.

An analysis conducted by New York City also found that having a driver’s licenses provides additional financial stability for families and increases employment opportunities for unauthorized immigrants. Having a car allows them to look for jobs and housing that are not located near public transportation.

It also helps to shield them from deportation. If a police officer pulls over an authorized immigrant driving without a license, they could be referred to US Immigration and Customs Enforcement and sent to removal proceedings.

The Trump administration has pushed back against efforts to prevent ICE from accessing DMV data. As New York’s driver’s license law went into effect Monday, a spokesperson for the Department of Homeland Security said in a statement that those records allow it to investigate crimes such as human trafficking by “building criminal cases, identifying criminal suspects, and enhancing officer safety.”

Spare us your amnesty – It makes every person more vulnerable when you shield pedophiles, child pornographers, human traffickers, and terrorists from law enforcement. https://t.co/SXkHstXjPc

The other infectious diseases spreading in the shadow of the pandemic
Imagine Hurricane Katrina during a pandemic. The US needs to prepare for that — now.
John Bolton is out. Let the era of Trump Alone begin.
Meet the young activists of color who are leading the charge against climate disaster
The US is evacuating diplomats from an Iraqi consulate citing credible threats from Iran
The two quid pro quos at the heart of the impeachment inquiry