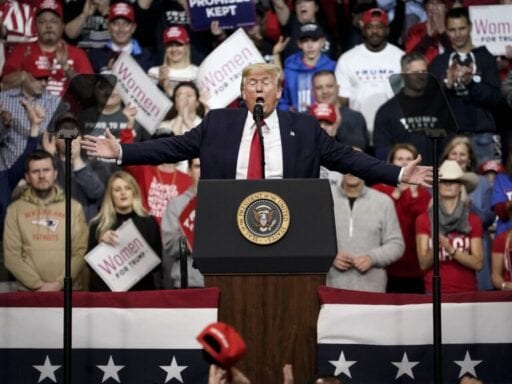 As President Donald Trump puts his impeachment trial behind him and begins his transition into election mode, a new poll found most voters believe he will win even if they don’t want him to have a second term.

The latest Monmouth University 2020 election poll, released Tuesday, indicates that about two-thirds of voters believe Trump will be reelected, with 27 percent saying the president will definitely win and 39 percent saying he probably will. Only 22 percent said he would probably lose to the Democratic nominee, while just 9 percent think Trump will definitely lose this fall. The national telephone poll, which surveyed 872 registered voters, has a margin of error of 3.2 percentage points.

Individual voters’ confidence in the president’s chances were starkly divided along partisan lines: Republicans were highly confident in a Trump victory come November, with 59 percent telling pollsters a second term is a sure thing and 34 percent saying winning is probable. Conversely, only 38 percent of Democrats said Trump is likely to win another term in office.

Overall, pollsters found a disparity between the number of register voters who believe Trump will win and those who feel he should win. Most — 55 percent — said they would like to see someone new occupying the Oval Office, while 42 percent said they feel Trump deserves reelection. It isn’t clear how many Republicans would like to see Trump replaced based on this polling, as it did not break these values down by party affiliation. However, other polling shows the president with record approval ratings among GOP voters.

The polling comes as Trump begins his reelection campaign in earnest: The president took to the road Monday, holding a campaign rally in Manchester, New Hampshire. He faces a Tuesday primary challenge in that state from former Massachusetts Gov. Bill Weld, a contest the president is expected to win by an overwhelming margin.

New Hampshire Democratic voters have their primary Tuesday as well, a contest expected to provide some clarity on the presidential race following Iowa caucuses marred by human and technological failings that ultimately led to a very delayed release of results — and dissatisfaction among candidates, party officials, and the public about how the caucuses were handled. And that disappointment was keenly reflected in Monmouth’s poll.

The Iowa Democratic Party struggled to report complete results for much of the past week after the state caucused last Monday. Precinct chairs reported having difficulties with an app they were supposed to use to report results and struggled to call in the caucus totals as well. Also, confusion over new rules may have led some errors to be introduced into the results. This led to delays in reporting vote totals that weren’t officially finalized until Sunday.

Though Buttigieg was ultimately awarded the most delegates from Iowa, Sanders won the most support from caucusgoers and his campaign officially asked for a recanvass in many precincts earlier this week.

Iowa’s issues renewed calls for reforming the entire early caucus and primary system, which currently sees Iowa and New Hampshire going first, nationally. The Monmouth poll showed that voters are relatively split when it comes to readjusting the electoral calendar.

Just over 1 in 4 voters think the current system results in the best candidate being chosen for the nomination, while 52 percent say it makes little difference which state goes first. However, there was a drop in support from last month among Democrats about whether Iowa and New Hampshire should continue to go first, with 7 percent saying the two states should vote first, down from 11 percent.

Critics of the current system argue that Iowa and New Hampshire should not be the first to caucus and vote because of the states’ demographics, as explained by Vox’s Dylan Matthews:

That does a profound disservice to the millions of Americans living in diverse, densely populated areas. Or, to put it more bluntly, it gives white people outsize power in determining nominees and disenfranchises black, Hispanic, Asian Americans, and Native Americans relatively speaking.

The size of the bias is truly staggering. Economists Brian Knight and Nathan Schiff estimated in 2011 that an Iowa or New Hampshire voter carried the same influence in determining her party’s ultimate nominee as five voters from Super Tuesday states put together.

Monmouth’s pollsters also asked about possible changes to the state order: 56 percent of Democrats said that no one state should go first, instead saying there should be a single, one-day primary to choose their party’s nominee.

Regardless, New Hampshire still has its vote Tuesday. Then there will be a sprint through a primary in South Carolina and a caucus in Nevada before diving into Super Tuesday. By then, voters will have a firmer grasp on how this year’s nomination race will shake out.

Vox Sentences: Killed over a parking space
Vox Sentences: Who will make history in Chicago?
Montana Gov. Steve Bullock has dropped out of the 2020 race, and says he won’t run for Senate
Vox Sentences: The caravan reaches Mexico
Why it’s so frustratingly difficult to know how bad the coronavirus outbreak will be
The backlash against Michael Che and Colin Jost as Emmy hosts, explained