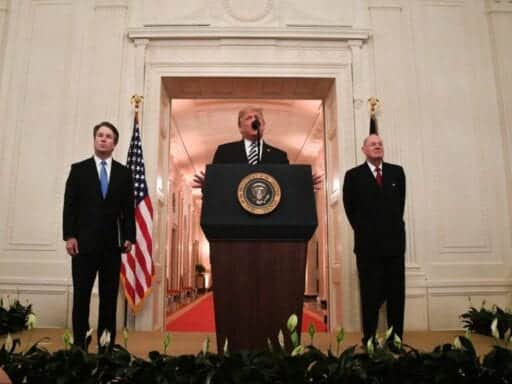 Trump, Kavanaugh, and #MeToo have changed Americans’ attitudes toward power and control. It could have an effect in 2020.

Three years ago, Americans heard Donald Trump on tape talking about grabbing women “by the pussy.” Two years ago, they learned of the many sexual harassment allegations against producer Harvey Weinstein, which helped kick off the #MeToo movement’s current, most public phase. One year ago, they saw Justice Brett Kavanaugh confirmed to the Supreme Court after Christine Blasey Ford testified that he had sexually assaulted her.

None of this makes headlines as much as it once did, superseded by news like a recent impeachment inquiry into President Trump. But Americans haven’t forgotten.

On the contrary, new polling suggests that the events of the last few years, including the election of Trump, the #MeToo movement, and the Kavanaugh hearings, have helped lead to a fundamental shift in the way many Americans view their government.

It started back in the fall of 2016, when the research firm PerryUndem began hearing something new in focus groups with Democratic and Democratic-leaning voters: “this palpable sense of who has power and control and who’s losing it,” Tresa Undem, a partner at PerryUndem, told Vox. More than ever before, voters were talking about the power white men seemed to have in American society and how they used it to control everybody else.

Those themes continued in polling around the #MeToo movement and the Kavanaugh hearings and were underscored in a poll conducted earlier this month and provided to Vox exclusively ahead of publication. Seventy-six percent of Democratic voters and 49 percent of voters overall agreed with the statement that “one reason Justice Kavanaugh was confirmed is because white men want to hold onto their power in government.”

“We would’ve never seen this three or four years ago,” Undem told Vox in an email. Beliefs like that could have effects at the ballot box; in 2018, voters’ views on men’s power in government were a strong predictor of whether they voted Democratic or Republican, Undem said. Overall, Americans — including men — are getting fed up with the balance of power in society. And they’re heading to the ballot box to change it.

The new poll, conducted by PerryUndem between September 17 and 19 on a nationally representative sample of 1,000 registered voters using YouGov’s online panel, looked at American attitudes toward the #MeToo movement two years after it became a topic of widespread public conversation. The pollsters also asked questions about Justice Kavanaugh and the Supreme Court, just days after new reporting by the New York Times brought up new sexual misconduct allegations against him.

They found that the majority of Americans still support #MeToo despite recent media backlash: 52 percent of those polled had a very or somewhat favorable view of the movement while 35 percent viewed it unfavorably. That’s in line with what PerryUndem found last December, when 52 percent viewed the movement favorably and 29 percent saw it unfavorably. Meanwhile, a 2018 Harvard CAPS-Harris survey showed that 55 percent of Americans supported #MeToo.

When it came to Kavanaugh, the pollsters found the same thing they did when they surveyed Americans in December 2018, shortly after his confirmation: Many view the justice unfavorably. In the September poll, 59 percent of Americans said it was likely Kavanaugh lied under oath about his teenage years, compared with 57 percent last December.

The latest Kavanaugh reporting probably did not have a major effect on those numbers, Undem told Vox, though recent focus groups with college-educated voters suggested they were aware of the news.

Perhaps the most revealing findings in the poll, though, were about voters’ views on power. The pollsters chose to ask about white men holding onto power in government, Undem said, because that theme kept coming up in focus groups. It may seem like “kind of a weird question,” she said, “but it just reflects what I’ve been hearing.”

“It’s not just women,” Undem said. “The findings around power stood out to me.”

The theme of who has power and who doesn’t has been coming up in focus groups since about September 2016, Undem said, when voters talked about abortion as an issue of control over women’s bodies. But voters’ concerns about power intensified with the election of President Trump. Those concerns likely stem from a combination of factors, including the release of the Access Hollywood tape in which Trump talked about grabbing women; the #MeToo movement and its exposure of allegations against powerful men; and “President Trump’s words and behavior around women, around immigrants, and around race,” Undem said.

A woman in an Atlanta focus group last month encapsulated this view, telling PerryUndem researchers, “there is a new feeling for me that I’m moving in the direction that I’m not as free as I used to be.” At any moment, the woman said, she “could be told what to do and controlled.”

Republicans don’t necessarily share these views. In the September poll, only 15 percent of Republicans agreed with the statement that Kavanaugh was confirmed because of white men wanting to hold onto power. Republicans have actually become more favorable in their opinions of Kavanaugh over time, with 81 percent viewing him favorably in the September poll compared with 60 percent in December.

Some white people, meanwhile, believe that whites are the ones at risk of losing power, Nadia Brown, an assistant professor of political science and African American studies at Purdue University, told Vox. Brown says she hears from white students who see power in America as a zero-sum game — “if someone gains power, then someone else loses power.” That conception of power comes out in white Americans talking about people of color taking their jobs, even if those jobs were more likely lost to automation or changes in government policy, Brown said. “There’s this mythical bogeyman that it’s some person of color.”

Still, even some Republicans are questioning the amount of power in the hands of white men. In a 2017 PerryUndem focus group on abortion consisting of male Trump voters, several agreed that more women should be involved in abortion legislation, and one said current abortion laws were written by “a bunch of old white men sitting in a room.”

And Americans’ views about power and control could affect their voting behavior. One of the biggest effects of the Kavanaugh hearings, Undem said, is that they made half of voters — including 41 percent of men and 58 percent of women — think about men having more power than women in government, according to the poll last December. That view was a significant predictor of voting for a Democratic candidate in the 2018 midterms, Undem said.

Ideas about who has power and who doesn’t also influenced women to run for office in 2018, Brown said. After Democrat Doug Jones beat Republican Roy Moore, who had been accused of romantically and sexually pursuing underage girls, in a 2017 special Senate election in Alabama, Democratic National Committee Chairman Tom Perez and many ordinary Americans on Twitter thanked black women for turning out in force to vote for Jones.

But for many black women, thanks were no substitute for “a seat at the table,” Brown said. Their reaction to the comments from Perez and others was, “how about you pay attention to our politics, the issues that we care about, the policies that would impact our lives? And if you’re not going to do it, we’re going to do it ourselves.”

“They ran for election in 2018,” Brown said, “and a record number of women of color are serving right now.”

Power and control are likely to be factors again in 2020, Undem said. In the September poll, for example, 49 percent of voters and a full 79 percent of Democrats said that the Kavanaugh hearings made them wish more women were elected to office. And beyond just voting for a man or voting for a woman, Americans are likely to go into the 2020 election with the ideas of power and control in mind. The feeling “that older white men have power and are exercising that power over other people, taking away rights, that to me is definitely going to have an effect,” Undem said.

The Kavanaugh hearings — in which a woman testified before an audience of mostly men, and her words were not enough to stop a man from being confirmed to the country’s highest court — cemented this feeling in many Americans’ minds, she added.

“People now know for certain that men have more positions of power,” Undem said. “You can’t really unsee that.”

How the new rules for the Paycheck Protection Program help small business owners
What the Watchmen graphic novel tells us about Jeremy Irons’s mystery character
12 Monkeys, one of TV’s weirdest shows, ends with a delightfully meta series finale
“It may be that I never go back to the grading system”
A crashed voter registration website is Floridians’ latest obstacle to the right to vote
The evidence for everyone wearing masks, explained