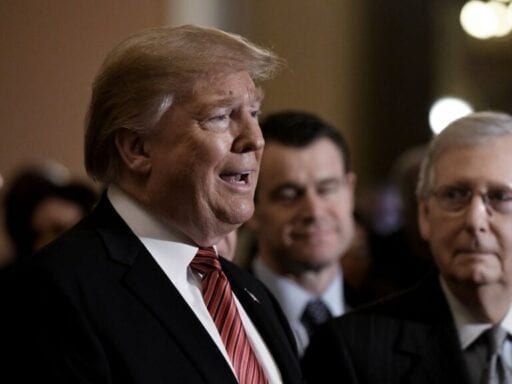 Just under a quarter of all Americans (24 percent) agree the situation at the border is as bad Trump makes it out to be.

Americans widely blame President Donald Trump and congressional Republicans for the stalemate in Washington that just broke the record as the longest government shutdown in US history.

According to a Washington Post-ABC News poll released Sunday, over half of Americans (53 percent) say the the president and his party should shoulder most of the blame for the closures; another 29 percent point their finger at Democrats in Congress. Just 13 percent of Americans say both sides should be held accountable as the shutdown continues to drag on.

About a quarter of the federal government has been closed for the last 23 days, after the president and congressional leaders have failed to compromise on funding levels for crucial federal agencies, leaving the food stamps program in a precarious position, national parks closed or vandalized, and about 800,000 federal employees furloughed or working without pay.

Trump claims that illegal immigration along the southern border is at a crisis, justifying his demands for more than $5 billion from Congress to finance a border wall. Neither the president, nor congressional Democrats, have been willing to back down (Democratic leaders top their border security spending at $1.3 billion).

And according to the recent poll, conducted via phone Jan. 8-11, most Americans reject the president’s reasoning for the shutdown. Less than a quarter of all Americans (24 percent) agree the situation at the border is as bad Trump makes it out to be. Nearly half of the public, or 47 percent, agree it’s a “serious problem,” but they stop short of labeling it as an outright crisis.

The distribution of blame for the shutdown unsurprisingly breaks down along partisan lines. Democrats overwhelmingly (85 percent) say Trump is at fault, while 68 percent of registered Republicans view congressional Democrats as the problem. And Republicans seem more supportive of the wall than ever before. Now 87 percent of Republicans back Trump’s passion project and signature campaign promise, up 16 points from the last year.

One notable development, however, is that Trump also appears to be losing ground with his base. According to a new CNN poll out Sunday, white people without college degrees are turning on Trump. While they still support building a wall along the US-Mexico border, their overall views of him are starting to dip. For the first time since last February, CNN has found that his approval ratings among his core constituents are in the red. Forty-seven percent of whites who don’t have college degrees disapprove of Trump; 45 percent say they approve.

This is not to say that the shutdown will cause lasting damage for Republicans heading into 2020, or that voters will recall this debacle as a key issue when they next head to the polls. Only 13 percent of Americans surveyed in the Washington Post-ABC poll said they were personally inconvenienced by the shutdown, and a mere 7 percent said it was a major problem. And judging the public reaction to previous shutdowns, the backlash facing the GOP may be short-lived.

But since the beginning of Trump’s unprecedented rise into politics, we’ve heard predictions that Trump’s base would never turn on him, no matter how extreme or controversial his views may be. If the fallout from the ongoing shutdown is any indictor, political gamesmanship in Washington may — at least temporarily — cause cracks in his popularity.