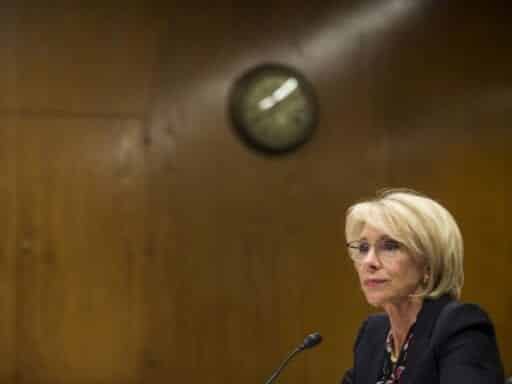 Some fear the rules, soon to be finalized, will essentially destroy the process of campus Title IX hearings.

The Department of Education under Secretary Betsy DeVos last year proposed new rules around campus sexual assault that had advocates on alert: Many feared that the regulations would discourage survivors from reporting assault and put them at a disadvantage if they did.

Since then, the Education Department has been reviewing public comments on the proposal, the Washington Post reported on Monday. And now, they’re getting close to releasing the final rules — and they will preserve the aspects of the proposal that had anti-assault advocates most concerned.

The final rules, expected to be released before the end of the year, are likely to include a controversial provision requiring schools to allow in-person cross-examination of students who report assault and harassment, as well as accused students. Many activists, as well as school administrators, say cross-examination is traumatic for a survivor of sexual violence; Jordan Draper, assistant vice president for student affairs at the College of New Jersey, called it “completely terrifying” in an interview with Vox earlier this year. She and others say their schools may have to scrap formal sexual assault hearings entirely if cross-examination is required.

The final rules will include one change that survivors’ advocates have pushed for, according to the Post: Universities may be responsible for investigating allegations of sexual misconduct at off-campus events like frat parties. But people familiar with the rules told the Post they would include most of the other provisions that stirred controversy last year, including a narrowed definition of sexual harassment and permission for schools to use a standard of evidence more favorable to the accused.

The result, many anti-assault advocates say, will be a system in which survivors are afraid to seek justice and schools have little incentive to provide it. Some, including the group Know Your IX, are considering lawsuits. And at some colleges and universities, administrators are working on alternative processes for addressing sexual assault and harassment claims, with the knowledge that when the new rules are final, the existing processes may become untenable.

The rules proposed last year govern the implementation of Title IX of the Education Amendments of 1972, which bans discrimination on the basis of sex in educational settings. Over the years, courts have ruled that sexual harassment and assault are forms of gender discrimination prohibited by Title IX. In 2011, the Obama administration released what is now known as the “Dear Colleague” letter, explaining how it would enforce Title IX.

The letter was not a new law — rather, it was guidance explaining how schools should comply with existing law. Among its core tenets was the statement that in order to comply with Title IX, schools had to use a “preponderance of the evidence” standard when deciding sexual harassment cases, meaning that the accused would be found responsible if the evidence showed it was more likely than not that a violation occurred. Prior to the letter’s release, some schools had used a higher “clear and convincing” evidence standard, which put a greater burden on accusers to show that the accused had committed misconduct.

Many anti-sexual assault advocates say that, while not perfect, the 2011 letter signaled a new seriousness about sexual assault at the federal level. In the years that followed, the issue got massive public attention, with many students holding their schools legally accountable for failing to keep them safe.

But accused students and groups advocating on their behalf have long argued that the Obama-era guidance is unfair to them. DeVos has apparently been sympathetic to this criticism, meeting in July 2017 with the groups Families Advocating for Campus Equality (FACE) and Stop Abusive and Violent Environments (SAVE), which advocate for the rights of the accused, and the National Coalition for Men (NCFM), a men’s rights group.

Then, in September 2017, DeVos rescinded the 2011 Obama guidance. The move was part of a larger push by the Trump administration — and the Education Department in particular — to roll back Obama-era anti-discrimination protections, as Jeannie Suk Gersen noted at the New Yorker. Under DeVos, the department also got rid of guidelines recommending that schools allow transgender students to use the bathroom that matches their gender identity, as well as guidance supporting affirmative action and detailing disabled students’ rights.

In the case of sexual assault, the Education Department in November 2018 released proposed rules to replace the Obama administration guidance. The new rules made several key changes:

They required schools to allow direct cross-examination of both parties at Title IX sexual harassment hearings. The 2011 guidance discouraged direct cross-examination, as “allowing an alleged perpetrator to question an alleged victim directly may be traumatic or intimidating, thereby possibly escalating or perpetuating a hostile environment.” Instead, some schools, like the College of New Jersey, allow accused students to pose questions to a neutral hearing administrator, who can relay them to the reporting student. Under the new rules, however, a lawyer or other representative of the accused student would be allowed to directly cross-examine the reporting student in person.

They raised the bar for what counts as sexual harassment under Title IX. The 2011 guidelines defined sexual harassment as “unwelcome conduct of a sexual nature.” But the new rules set a stricter standard for what constitutes harassment, defining it as “unwelcome conduct on the basis of sex that is so severe, pervasive and objectively offensive that it denies a person access to the school’s education program or activity.” Anti-sexual assault advocates say this means students would not have grounds for a complaint until they were already essentially being driven out of a class or school because of harassment. “I would certainly look at that standard, and if I was a student who was being sexually harassed, wonder what would make my administration take it seriously,” Jess Davidson, executive director of the group End Rape on Campus, told Vox last year.

The Department of Education received more than 100,000 comments on the proposed rules, including many concerns. Officials there have spent the last year examining them and working with lawyers, Laura Meckler reports at the Washington Post. Now, they’re nearly finished and the final rules are likely to be released before the end of this year, if they aren’t pushed into January.

The final rules will look a lot like the proposed rules, sources say

Despite the year of examination, the final rules look a lot like the old rules, sources told Meckler. They will still narrow the definition of sexual harassment and allow the “clear and convincing” standard. And they will still require schools to allow direct cross-examination of students reporting harassment or assault.

One change, according to Meckler, is that schools may be held responsible for some incidents that happen off-campus. Some sources called this a major alteration of the proposed version of the rules, while others said it was more of a clarification.

But in general, the final version of the rules will keep all the provisions that most concerned advocates in the proposal, at least according to Meckler’s sources. The provision regarding cross-examination, in particular, has long worried activists and campus officials alike.

“I think that it would be really hard for college administrators who are looking out for the safety of all students to recommend a process where there’s going to be cross-examination,” Draper, the College of New Jersey assistant vice president, told Vox earlier this year.

For many school officials, a provision requiring direct cross-examination in Title IX hearings could mean the end of Title IX hearings, as the prospect simply becomes too traumatic for students reporting misconduct.

Because of this, the College of New Jersey and some other colleges and universities are looking at alternatives to formal hearings, including processes based on the concept of restorative justice, an approach that focuses on repairing the harm done to a survivor rather than on assigning punishment to a perpetrator. At Rutgers University, for example, the reporting student can choose to meet with school officials to decide what actions by the accused — such as attending a workshop on toxic masculinity or completing community service — would help repair the harm.

Meanwhile, anti-sexual assault groups are considering suing the education department over the new rules once they are final. Sage Carson, manager of the group Know Your IX, says the many public comments against the regulations could help their case. “We hope it will give us grounds to really fight the rule through litigation,” Carson told the Post.

Regardless of what happens, one thing is clear: Much of the increased attention to the problem of campus sexual assault in recent years has come thanks to the advocacy work of students themselves. And that advocacy will continue no matter what the Education Department does.

Mitt Romney is now just like every other Republican: he’s with Trump for the tax cuts
Israel is deporting a human rights activist over his BDS support
The Witcher has monsters and naked wizards. Somehow, it’s boring.
Trump’s Super Bowl interview was 8 minutes of pettiness and empty braggadocio
Amazon gets hit with antitrust charges in Europe
2 years of NFL protests, explained