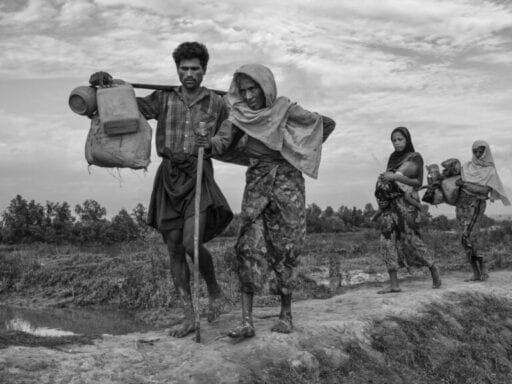 The Myanmarese military would often attack Rohingya villages in the early hours of the morning, in an attempt to “instill immediate terror.”

Residents would wake to the sound of gunfire, explosions, or victims’ screams, as soldiers shot “indiscriminately” into homes or set them on fire. The military also shot at villagers as they tried to flee.

That description is part of a 400-page report that a United Nations human rights panel released Tuesday. The document vividly details the human rights violations carried out by Myanmar’s armed forces — known as the Tatmadaw — against the Rohingya Muslims and other ethnic minorities throughout the country since 2011.

This new report builds on preliminary findings by the UN, published in August, which recommended that top military officials in Myanmar be investigated and prosecuted for crimes against humanity and genocide. But this document goes even further, documenting specific crimes and pinning blame for the atrocities on the highest levels of Myanmar’s military.

“The nature, scale and organization of the operations suggests a level of preplanning and design on the part of the Tatmadaw leadership consistent with the vision of the Commander-in-Chief, Senior-General Min Aung Hlaing,” the report said.

More than 750,000 Rohingya Muslims have fled Myanmar to neighboring Bangladesh in the wake of the violence that spiked last August, following an attack by a small armed Rohingya faction on Myanmarese security forces.

Myanmarese authorities used the attack to justify what they said were attempts to root out terrorists. They unleashed a campaign of violence that included wholesale attacks on villages, the indiscriminate murder of civilians, and rape and sexual abuse.

UN Investigators with the Independent International Fact-Finding Mission on Myanmar interviewed 875 witnesses for the report, and gathered chilling firsthand accounts of abuses against the Rohingya and other marginalized groups.

Witnesses described soldiers dragging Rohingya people out of their homes and shooting them at point-blank range or slitting their throats. “If people were not killed by the gunshots, they were slaughtered to make sure they were really dead,” a survivor told the investigators.

Women and girls were physically and mentally tortured and brutally raped, according to the report. Some were tied naked to trees by their hands or hair.

In an ambush on Maung Gyi Taung, a village in Rakhine State, witnesses saw security forces rip infants and babies away from their mothers and throw them into the river to drown them. Witnesses say other dead bodies were burned or buried in mass graves.

About 10,000 Rohingya were killed in the first two months after the crackdown last year, the report says, adding that this is a conservative estimate.

The UN report also details the history of the oppression and violence against the Rohingya and other ethnic minorities in Myanmar.

The Rohingya, a Muslim minority group that live mostly in Rakhine State, have long been marginalized by Myanmar’s Buddhist-majority (and military-controlled) government. Since the passage of the Burma Citizenship Act of 1982, they have been denied citizenship — and all the benefits and protections that come with it.

The Rohingya have faced waves of violent attacks in the past decade, including in 2012 and 2016, with attacks escalating in August 2017 during what the Myanmar military called “clearance operations.”

In examining this history, the UN suggests that “lack of legal status and identity is the cornerstone of the oppressive system targeting the Rohingya.”

The UN report documents instances of human rights violations against civilians in at least two other states in Myanmar, including forced labor, evictions, and sexual violence, that date back to 2011. The military has also targeted the Rakhine ethnic group, though some ethnic Rakhine are also implicated in atrocities against the Rohingya.

This United Nations report is damning. What’s next?

The question now is how the international community will respond.

The UN report holds Myanmar’s military responsible for the human rights abuses, saying “it acts with complete impunity and has never been held accountable for the violations of international law it is consistently involved in.”

The report concludes that top military commanders — including the commander in chief, Senior-General Min Aung Hlaing — should be investigated and prosecuted for crimes against humanity, through the International Criminal Court or an ad hoc tribunal.

It also calls for urgent political reforms within Myanmar, including rescinding discriminatory laws, restructuring the Tatmadaw, and removing its current leadership. “Through a constitutional amendment process, the Government should further pursue the removal of the Tatmadaw from Myanmar’s political life,” the report says.

This is a bold recommendation, but it’s also one that seems especially unlikely to happen.

De facto civilian leader Aung San Suu Kyi, a democracy advocate and Nobel Peace Prize winner, shares power with the military. Her election in 2015 was seen as a positive step toward democratization in Myanmar, though the UN report criticizes her for not using her moral authority to advocate for the Rohingya and other oppressed groups.

Finally, the report also puts pressure on the international community to act. The US has sanctioned members of Myanmar’s security forces, as well as individual units, for their “role in ethnic cleansing.” But those financial penalties haven’t yet reached the highest levels of Myanmar’s military.

The US also bashed the International Criminal Court last week, with National Security Adviser John Bolton calling it “illegitimate.” That would seem to offer cover for Myanmar and for those accused of committing such atrocities.

The UN General Assembly begins this week, and the Rohingya crisis is likely to be among the topics discussed.

Suu Kyi is once again skipping the General Assembly — but her absence doesn’t preclude the international community from condemning Myanmar, or from taking collective action.

How South America became a coronavirus epicenter
Read Ford’s written testimony: “I am here today not because I want to be. I am terrified.”
White UConn students were arrested for shouting the n-word. Black students say the incident is part ...
What’s happening with Australia’s prime minister, explained
Why Nancy Pelosi proposed her own $2.5 trillion coronavirus stimulus bill
You — yes, you — can help AI predict the spread of coronavirus