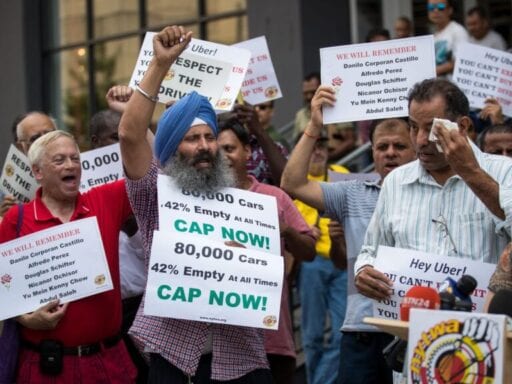 In Uber’s largest market, thousands of drivers are living in poverty.

New York City is cracking down on Uber and other app-based ride-hailing services that have clogged the city with thousands of extra cars, while contributing to poverty-level wages for thousands of drivers.

On Wednesday, the City Council approved several bills to regulate for-hire vehicles, which includes a cap on the number of drivers who can drive for Uber and Lyft, and establishes minimum pay rates to ensure drivers can make a living. The bills also require the app-based companies to report details about each trip, including the duration, cost, driver earnings, and the company’s commission.

The legislation represents the most aggressive city effort to regulate Uber since the Silicon Valley tech giant upended urban transportation starting in 2011. The battle in New York City is particularly crucial to Uber, as it represents the company’s largest market. In May, the city recorded 18 million app-based rides — more than six times as many during the same time period three years ago. Concerns about Uber’s business model and work culture have renewed focus on the tech company, and New York City may pave the way for other cities to provide much-needed oversight of the company’s business practices.

New York City lawmakers had tried — and failed — to pass similar laws in 2015 that would have regulated the expansion of ride-hailing companies. At the time, Uber was only four years old, and the startup was engaged in a fierce global campaign to halt any local attempt to regulate its business, threatening to leave cities that did so. It spared no effort to quash Mayor Bill de Blasio’s proposals too.

But since then, the ride-hailing industry has exploded, and the problems that have come with it are harder to ignore. In a sense, New York City is ground zero in the economic experiment of the “gig” economy. The number of people earning a living as Uber and Lyft drivers in the city is now six times larger than it was three years ago. As of July 2018, more than 78,000 cars were affiliated with the four main ride-hailing apps, a sharp increase from the 12,500 cars registered in January 2015.

The explosion of ride-hailing apps has been great for startups’ investors, but for the drivers, not so much. In New York City, the unrestricted growth has triggered serious financial strain on the city’s taxi drivers, and has even made it hard for Uber drivers to compete and earn a decent living. This dynamic was thrust into the spotlight recently, with news that six professional drivers in the city have died by suicide over a period of 12 months in 2017-’18, including three taxi drivers who were struggling to make ends meet.

The rise of Uber has caused tensions to flare between the city’s taxi drivers and the newcomers behind the wheel. But both groups have come together to push city lawmakers to rein in the ride-hailing companies by limiting the number of drivers in the city and creating a minimum pay rate.

The “City Council must send a clear message to these companies: if you want to operate in our city, you must pay workers fairly,” Ryan Price, the executive director of the Independent Drivers Guild, said in a statement. The guild represents more than 65,000 drivers for ride-hailing companies in the city.

This time around, Uber has taken a more subdued approach. A spokesperson for the company told the New York Times that the company believed that “all full-time drivers should be able to make a living wage,” though she didn’t comment on the city’s regulations.

The new laws strike at the core of Uber’s business model, which relies on an enormous pool of drivers to be available at any given time. That means competition for rides is high and drivers must work long hours.

The city is currently analyzing pay rates and earnings for drivers who work for the four largest app-based firms: Uber, Lyft, Juno, and Via.

Economists at the New School and the University of California Berkeley published a report in July with some limited pay data, and they came to some alarming conclusions. For one, they discovered that driving for ride-hailing apps in New York City is not really a part-time job for people who want to earn extra cash. More than half of their drivers are ferrying around passengers on a full-time basis, and about half of all drivers are supporting families with children on that income. Their earnings are so low that 40 percent of drivers qualify for Medicaid, and about 18 percent qualify for food stamps.

The low pay problem is largely related to how drivers are classified. Because they are independent contractors and not employees, Uber doesn’t need to make sure they earn the minimum wage. In New York City, the minimum wage is currently $13 an hour, and will reach $15 an hour by 2020. To make the equivalent of $15 an hour, independent contractors in the city would need to earn about $17 an hour, taking into account payroll taxes and some paid time off.

But the New School report showed that the median hourly wage for app-based drivers in New York is about $14 an hour. The authors recommended policies that would require ride-hailing companies to make sure drivers are earning at least $17.22 in New York City.

“The app companies could easily absorb an increase in driver pay with a minimal fare adjustment and little inconvenience to passengers,” they wrote.

While the news laws don’t go as far as mandating minimum hourly wages, they would allow the taxi commission to set a minimum pay rate per trip, regardless of the trip’s length. That would be a start.