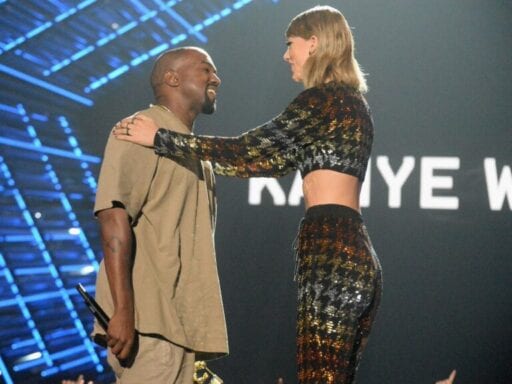 The saga of Taylor Swift and Kanye West will never end. Here’s the latest.

In a moment that might give you flashbacks to the fun celebrity gossip part of 2016, the hashtag #KanyeWestIsOverParty is trending on social media right now. It’s a response to 2016’s notorious #TaylorSwiftIsOverParty hashtag, and it marks the latest chapter in the endless saga of the Taylor Swift vs. Kanye feud.

Because early on Saturday, new footage from the infamous “Famous” phone call between the two stars leaked — and it complicates the original story.

Here’s the background. Back in February 2016, Kanye released a new song, “Famous,” that featured a controversial lyric: “I feel like me and Taylor might still have sex. / Why? I made that bitch famous.” He was referencing his scandalous altercation with Taylor in 2009, when Kanye stormed the stage at the MTV VMAs as Taylor accepted an award to announce that it really should have gone to Beyoncé. In 2009, Taylor Swift was already an enormous star, but Kanye was suggesting in “Famous” that it was his doing that Taylor became a household name.

Shortly after the song released, TMZ reported that Kanye had checked with Taylor to make sure she was cool with the lyric before he dropped it, and that she got the joke and gave him her blessing. But Swift, through her publicist Tree Paine, denied it. “Kanye did not call for approval, but to ask Taylor to release his single ‘Famous’ on her Twitter account,” Paine told the New York Times. “She declined and cautioned him about releasing a song with such a strong misogynistic message.” She added, “Taylor was never made aware of the actual lyric, ‘I made that bitch famous.’”

Kanye, meanwhile, maintained that he definitely had checked with Taylor before he dropped the song. Several weeks of contentious back-and-forth ensued, culminating when Taylor won her second Album of the Year award at the Grammys and made a highly acclaimed acceptance speech shouting out “all the young women out there” who have to deal with “people along the way who will try to undercut your success, or take credit for your accomplishments or your fame.” It was all but certainly a direct reference to Kanye’s song.

But then Kanye’s wife, Kim Kardashian West, changed the story. In July 2016, Kim posted a series of videos on Snapchat that showed Kanye calling Taylor up to ask for her permission to include a verse referencing her in “Famous.” (Kanye, Kim explained, films himself all the time for a documentary about his life he plans to make one day.)

In the videos Kim posted to Snapchat, Kanye clearly reads Taylor the line, “I feel like me and Taylor might still have sex,” and asks for her approval. The video is cut together in a way that makes it unclear that Taylor ever heard the line “I made that bitch famous,” but they do discuss whether or not Kanye would have had any way of knowing that Taylor was already famous in 2009, in a way that makes it appear that at the very least, he’s given her the gist of the line.

Kanye repeatedly says that he wants Taylor to be happy with the finished song. We also hear Taylor respond that she appreciates the thought, that she thinks the lyric is “tongue-in-cheek,” and that it would probably be good for her public image to be able to say that she knew about the song ahead of time.

As soon as the video dropped, Taylor Swift haters exploded. Taylor Swift, they declared, was a manipulative, cold-blooded snake and this video proved it. #TaylorSwiftIsOverParty trended on social media, and gleeful observers flooded her accounts with snake emojis.

Taylor issued a statement reiterating that her problem with the song was the word “bitch,” which she said Kanye never told her about. “You don’t get to control someone’s emotional reaction to being called ‘that bitch’ in front of the whole world,” she wrote in a since-deleted Instagram post.

But her statement did little to calm the frenzy. As far as the wider internet was concerned, Taylor Swift was canceled.

So Taylor disappeared from public life for a year to wait out the schadenfreude. She built her next album, 2017’s Reputation, around the idea that she was “a snake.” And in the recently released Netflix documentary about her life, Miss Americana, she talked about how difficult she found that time to be, as someone who built so much of her self-identity around the idea of being a good person who people would like. “When people decided I was wicked and evil and conniving and not a good person,” she said to her mom, “that was the one that I couldn’t really bounce back from because my whole life was centered around it.”

Nearly four years later, the new video appears to complicate the story that Kim Kardashian told everyone in 2016. It strongly suggests that Taylor was telling the truth about that phone call — but that Kanye was too.

The video that Kim dropped back in 2016 was spliced together from different pieces of the infamous conversation, but it appeared to show mostly the end of Kanye’s phone call with Taylor. This new footage, which arrived online from an unknown source late Friday night and rapidly spread across social media, is uncut, although it does not show the phone call in its entirety. It appears to be from the beginning of the conversation.

KIM K AND KANYE AND THE MOST DESPICABLE, GROSS AND MANIPULATIVE PEOPLE IN THE INDUSTRY THEY LIED ABOUT TAYLOR SWIFT IN 2016 AND THIS THREAD OF THE LEAKED PHONE CONVERSATION WILL SHOW YOU THAT. pic.twitter.com/jCw07z8Vpf

In the new footage, Kanye clearly asks Taylor if she would be interested in debuting “Famous” from her Twitter account, just as Taylor maintained back in 2016. “You got an army. You own a country of motherfucking two billion people, basically,” he says. “If you felt that it’s funny and cool and like, hip-hop, and felt like The College Dropout and the artists like ’Ye that you love, then I think that people would be, like, way into it.” He suggests that he thinks it would be funny and good for her public image for her to be able to say that she knew about the song ahead of time.

Taylor seems puzzled at the idea that it would make sense for her to release the song, and when Kanye opens his pitch by revealing that it contains an “extremely controversial line” about her, she sounds nervous. “What is it?” she asks. “Is it gonna be mean?”

Kanye goes on to workshop a couple versions of the line that became “I feel like me and Taylor might still have sex” with her. He starts off with “I feel like Taylor Swift might owe me sex,” which makes Taylor laugh and say, “Well, that’s not mean!” although she notes that the line is “absolutely crazy.”

“I’m glad it’s not mean, though,” she says. “The buildup you gave it, I thought it was gonna be, like, ‘That stupid dumb bitch.’”

Kanye then goes on to offer the possibility of making the line, “I feel like me and Taylor might still have sex,” noting that his wife prefers the first version. “The ‘owe’ part,” he says, makes him nervous, because of the possibility of “some feminist group type shit.”

“That’s the only thing about that line,” Taylor agrees, “is that the feminists are gonna come out. But I mean, you don’t give a fuck, so.”

Overall, the conversation appears to fit both Kanye’s and Taylor’s versions of the story. Kanye does repeatedly ask Taylor for her approval of the song, and she does tell him she thinks it’s funny, just as Kanye said when it first dropped. And he does ask Taylor to release the song on her Twitter account, and she does warn him that it could spark some feminist criticism, just as Taylor said in her statement back in 2016. Kanye clearly thinks the controversial part of the lyric is when he suggests that they might have sex, which is what he’s concerned about, and Taylor is clearly more worried that he might call her a bitch, which he does not mention he plans to do.

For Taylor Swift fans, though, the video functions as a complete repudiation of the narrative Kanye and Kim established back in 2016. It’s now clear, they maintain, that Kim and Kanye lied about Taylor okaying the line “I made that bitch famous,” that Taylor was in the right all along, and that Taylor’s 2016 cancellation was just Kanye heaping more undeserved humiliation on Taylor on top of the travesty of 2009. Hence, it’s now Kanye West who should be over.

“My heart breaks listening to that phone call, the fact that she even picked up the phone and wasted her valuable time to listen to that nincompoop speak is just a testament to how great a human she is,” tweeted Taylor’s friend and collaborator Todrick Hall. He added, “The sad part is that I’m sure there will be no apology from him or the millions of people who took those gifs of a conversation & trailer of an actual conversation as fact without ever hearing the convo in full.”

What is perhaps more interesting than the question of which artist is right, however, is that throughout the conversation, both Taylor and Kanye are hyper-aware of how “Famous” will fit into their public images. Kanye complains that people think he’s a bully, and he wants to make sure this song doesn’t play into that narrative. Taylor, who at the time was at peak media saturation following the release of 2014’s 1989, notes that “everything that I do becomes a feminist think piece,” and that “right now, I’m, like, this close to overexposure.”

And in the end, that’s the reason Taylor cites for refusing to launch the song from her Twitter account: not the idea that it’s misogynistic, but because “if I launch it, honestly, I think it’ll be less cool.”

Thus far, none of the parties involved have made a public comment on the new footage.

Trump’s Covid-19 disaster will likely get worse before Biden takes office
Sharp Objects is reclaiming Southern Gothic tropes for rebellious girls
How to make a movie look like one long shot
Twitter is tightening its rules against voting misinformation
Ilhan Omar, a progressive Muslim woman, wins Minnesota primary for Keith Ellison’s House seat
Democrats are grappling with calls to “defund the police”