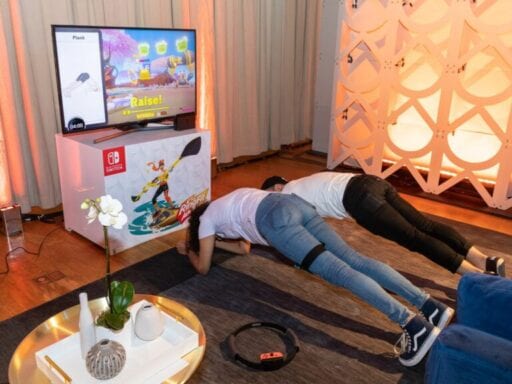 Share
Loading...
Nintendo is really good at getting me to hold planks for stretches of time, too. For video games! | James Bareham/Vox Media

Five days a week, I force myself out of bed just before the sun comes up to go to the gym, and god, I hate it.

To be clear, I love working out. Which often sounds pretentious to admit, or insincere — who could possibly enjoy waking up that early, contorting your body into horrible positions, running in place until you’re breathless, and getting drenched in sweat? Exercise is practically built to be emotionally and physically painful.

I enjoy working out, though, because I love the aftermath. I love to feel my otherwise-constant anxiety leaving my body, evaporating into deep breaths of recovery on the walk back home from the gym. I love how it’s become easier and easier to trudge up four flights of stairs to my apartment, and how I no longer feel a need to pass out in bed once I make it through the door. I love how I can lift heavy boxes, or run to catch a train. I love seeing muscle definition in my abs and arms and legs. I even love my butt, which is wildly important.

Still, it takes a serious amount of willpower to persuade yourself that the benefits of exercise outweigh all those miserable negatives. And that doesn’t take into account the sense of self-consciousness that can often come with dropping into a gym or workout class as a newcomer, no matter your fitness level. Exercise can make me feel really good, but it also took years of learning to ignore what I was convinced were judgmental stares to get there.

As our collective interest in health and fitness grows, technology has fought to keep up with it and address what’s most intimidating about exercise (and sell us new things in the process). Fitbits and smartwatches keep the physical activity we do literally close to the chest, packaged in fun graphics and record-keeping incentives. Extra-large, expensive water bottles are a fashionable hint at a private fitness regimen that requires no further questions. There are apps to work out with a personal trainer, getting feedback in silent, asynchronous comfort. Wearable fitness tech can also become all-consuming, for better or worse, making every part of their users’ lives trackable and quantifiable.

The control I have over my body, my time, and my exercise is important to me, and video games are all about giving a player that control.

All these devices and accessories can be costlier than a gym membership, an expense that can already require a decent amount of expendable income. But these fitness-oriented and fitness-adjacent products come with a non-monetary promise: freeing us from the confines of the gym, both materially and psychologically. And among all these options, I’ve long advocated for what I still think is the most successful supplement to my daily workouts: exercise video games.

What can be a repetitive, exhausting, even embarrassing experience becomes emphatically less so when paired with a video game. Playing Just Dance, where you mimic on-screen professional dancers’ silhouettes to radio-friendly songs, is the closest I’ll ever get to thinking that I can really dance. Dance Dance Revolution might not look as convincing, but its directional pad makes players stomp all over the place to quick rhythms. I’ve played VR games that make me actually swing my fists to box and move my body all around the room to keep up with music or virtual monsters; I’ve had my terrible posture mirrored back to me when playing exercise games that use the Xbox Kinect with its built-in camera.

It’s Nintendo that’s focused the most on these exercise games, however. The House of Mario is the company that constantly seeks to translate our boring daily lives into something entertaining and accessible (even to people who don’t know anything about Mario). It’s the company that wants to track your sleep under the cute veneer of Pokémon characters. It’s the company that installed a pedometer into its Nintendo 3DS handheld hardware, trading steps for coins that could be used to purchase in-game collectibles. And it’s the company whose Wii console found mainstream appeal through its motion controls, and put them to use in games like Wii Sports and Wii Fit, where you played sports or exercised in real time as a little avatar of yourself.

Wii Sports was bundled with the Wii, and as such was the console’s best-selling game; the original version of Wii Fit, on the other hand, came with a special “balance board” add-on that required a higher price point. Despite the extra cost, it was still one of the top 10 best-selling games on Wii. Many of those other exercise games like Just Dance made bank as well.

Nintendo’s exercise games seemed particularly radical in 2006, when the Wii launched. Video games by and large were sedentary, meant to be played in a comfortable chair ad infinitum. The general thinking was that games didn’t contribute to fitness; they were detrimental to it. But the Wii became Nintendo’s biggest hit in decades, partially on the strength of games that masked exercise in customizable characters, cheery visuals, and compelling activities to a wider swath of players. (Wii Sports made me actually enjoy “playing” golf for the first, and maybe the last, time in my life.) They weren’t alternatives to more rigorous exercise, but experts said Wii Fit and the like could be complementary to a regular routine, and could open the door to more frequent working out.

In the years since Nintendo sunset that hardware to move onto more powerful systems, such as 2012’s lackluster Wii U, exercise games have taken a bit of a backseat. Instead, Nintendo made efforts at redirecting its focus toward its core audience of longtime video game players, with games that relied on iconic characters and traditional gameplay. The Wii U failed commercially, however, as other developers that made broadly accessible games for Nintendo systems bailed. The same went for traditional development companies that were attracted to Microsoft and Sony’s more powerful hardware, the Xbox One and PlayStation 4.

Nintendo’s current system is the Switch, a piece of hardware that reclaims the Wii’s motion controls without sacrificing conventional gameplay. The Switch allows owners to play games on the TV like most other video game systems, or disconnect it and continue to play it while holding it, using the tablet-like console’s built-in screen. The Switch’s version of those exercise-oriented games is the upcoming Ring Fit Adventure, which is arguably stranger than the simple Sports and Fit. But in that strangeness comes something wonderful: an exercise game that is wildly fun to play, and a good workout, too.

I recently played Ring Fit Adventure for an hour under Nintendo’s supervision, testing out its feature set of workout plans, minigames, and a mode that offers an overarching fantasy story, where swords are replaced with pilates exercises. I played as a customizable athlete named Allegra (of course) who is tasked by a sentient pilates ring to take down an evil dragon named Dragaux. Dragaux is an incredibly buff villain, and the best way to defeat him is to get on his fitness level. To do so, I had to jog through linear paths beset by the occasional group of enemies, who could only be defeated by executing crunches, bicep curls, or classic pilates moves with the ring.

The entirety of Ring Fit Adventure is played solely by moving your legs, and pressing in and pulling out on an interactive pilates ring. I had to actually jog in place in order to move my character. During the fight sequences, the game offers a reprieve from the cardio to offer an arsenal of shorter exercises: I could hold the ring controller into my chest and do ab twists for 30 seconds to deal damage; I could squat, hold my position, then dramatically release to vanquish a little monster trying to get in the way of my workout.

It’s comforting to have this kind of variety within and flexibility over a workout, whether it’s in terms of where you do it, when you do it, or how you do it. Fitness classes and gym sessions can be limiting, by comparison. It’s hard to shake my shame when I’m the only one in a class who can’t do burpees for more than a minute, let alone have proper form while doing so. And if I manage to show up less than 15 minutes late for a class, well, I deserve an award. (Like, say, a break from the gym.)

The control I have over my body, my time, and my exercise is important to me, and video games are all about giving a player that control. Gamified exercise equipment manifests that control literally. And what’s more important is that failure is quantifiable and preventable, not a qualitative and mockable measure. Succeeding in Ring Fit Adventure and its ilk is as much about accruing traditional video game experience points as it is successfully performing moves. As a single-player game, no one is going to look at you concerned or amused by how much you’re flailing.

Ring Fit Adventure does estimate how many calories you burned during a level or performing a particular exercise, but it’s easy to ignore this data. It has no true bearing on the game itself, and I wasn’t prompted to enter my height and weight. Deemphasizing these measures of health feels important to me when it comes to experiencing a safe exercise space, but outside of video games, it’s rare to find a piece of tech that doesn’t point out how much energy you’re actually burning up.

Calorie counting is not inherently bad, and to many people it is valuable, but it also prioritizes a number that can say little about the person it refers to. Caloric information by itself is hardly a good measure of overall health; I’d argue that defeating an enemy in a game that forces you to jog quickly, bring your knees up high, and hold a plank for a minute is a better metric, at least for my own purposes.

Video games aren’t as hardcore a workout as a HIIT class. But they can build a sweat, teach you new kinds of exercise moves, and most importantly, aren’t a necessary evil like real-world exercising can feel like. I looked like a goof while playing, but games don’t judge how you look, and they don’t require you to show up on time.

A Christmas Carol, explained by a 5-year-old
Fauci’s Senate testimony debunked a number of Trump’s favorite coronavirus lies
How 4 small businesses have shifted to online sales
The Fight explores how the ACLU is navigating the Trump era through 4 key cases
Can you guess which Americans are most into plant-based meat?
What we know about the Health Department website cyberattack