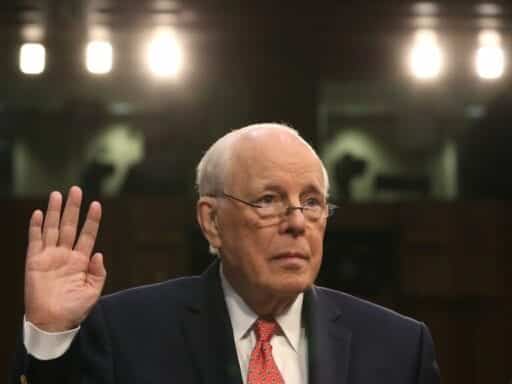 John Dean says that’s the difference between the sitting president and Richard Nixon.

A lawyer who knows a little something about unbounded White House power is worried about Brett Kavanaugh — and Donald Trump.

John Dean, a former White House counsel for President Richard Nixon, warned that Kavanaugh’s Supreme Court nomination could lead to a tremendous expansion of executive power, as part of his testimony in front of the Senate Judiciary Committee on Friday. He also argued that Trump was different from Nixon and said the current president would not succumb to pressure for his resignation because he does not respect the rule of law.

“I think [Nixon] left because the man, at his core, had a respect for the rule of law,” Dean said. “That’s one of the differences I find today in Mr. Trump and the reason I don’t think he would resign. He could care less about the rule of law.”

Dean also detailed what he saw as the impact Kavanaugh could have on the question of presidential power — and argued that his appointment could threaten the guardrails that have been placed on the executive office. “If Judge Kavanaugh joins the court, it will be the most presidential powers–friendly court in the modern era,” Dean said, while questioning Kavanaugh’s stance on U.S. v. Nixon, a 1974 Supreme Court case that forced Nixon to respond to a subpoena on materials related to Watergate. “It’s not clear to me listening to the testimony that he really believes U.S. v. Nixon was correctly decided,” Dean added.

Dean previously served in the Nixon White House from 1970 to 1973 and was the first official from the White House to testify in front of Congress and allege that Nixon had ties to Watergate.

During his panel this week, Kavanaugh has declined to state whether he thinks a president should be subject to a subpoena — though he sought to rebut previous statements he made suggesting that Nixon was wrongly decided. In order to prove his point, Kavanaugh emphasized repeatedly that he felt the Supreme Court holding is one of the four greatest moments in judicial history. “I don’t think he’s informed the committee of his real position on the case,” Dean added.

Kavanaugh’s views on executive power are of particular interest to lawmakers as they review his nomination because they stand out, even among the judges on President Trump’s shortlist. In a 2009 Minnesota Law Review article, Kavanaugh argued that a president should not be criminally investigated until impeached by Congress, and suggested that the indictment of the president could be “crippling” for the federal government. These views have raised alarms for Democrats, especially given special counsel Robert Mueller’s ongoing investigation into the Trump campaign and Russian election interference.

Dean also cast doubt on the way that Kavanaugh’s review has been handled, and he noted that what he saw as shoddy reviews of both Justices William Rehnquist and Clarence Thomas during their confirmations ultimately hurt both of their tenures on the court. There is evidence that Rehnquist may have lied and that Thomas was not fully confronted regarding the sexual harassment charges brought by Anita Hill, he said.

“It has haunted their careers on the court; it’s hurt the court and the American people,” he said. “Because of the withholding of documents, Judge Kavanaugh may be traveling the same path as Rehnquist and Thomas.”

Congress should cancel its Thanksgiving recess and pass another stimulus bill
Democrats’ voting rights bill is a big test for Biden’s global democracy agenda
Ben Ray Luján’s win holds New Mexico’s open Senate seat for Democrats
Collins was supposed to be different
Bernie Sanders’s definition of democratic socialism, explained
The pandemic may leave communities of color undercounted in the census. It could cost them billions.