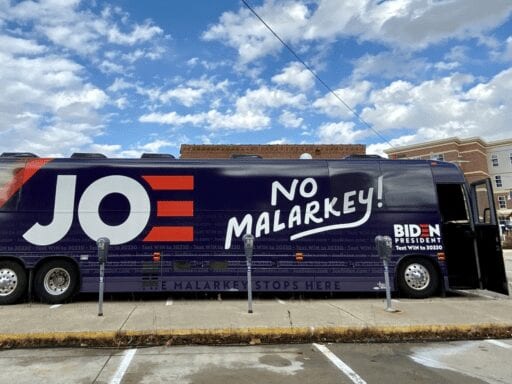 Boldly unafraid to be uncool.

If you are looking for a candidate who tolerates, embraces, or indulges in malarkey, then former Vice President Joe Biden is not for you.

His anti-malarkey stance is emblazoned clearly on the bus he’s using for an early December tour of Iowa, complemented by a #NoMalarkey hashtag, a Twitter video, and all the other accoutrements of a modern political campaign.

We’re officially on the road for our eight-day #NoMalarkey Tour across Iowa! pic.twitter.com/cGSblBnHoZ

Biden, who was never been popular with a social media crowd that tilts younger, better-educated, and more left-wing than his base is naturally getting roasted online for his fuddy-duddy slogan.

This is the best way to combat the criticism that you’re an out of touch old man. #nomalarkey https://t.co/BbNCoINwf6

And it is in many ways an incredibly bad slogan, conveying essentially nothing in the way of information or themes while reminding everyone of one of the candidate’s main weaknesses — he is very old.

But it does have a few things going for it. “No malarkey!” is distinctive and memorable — there’s no confusion about who is against malarkey and no forgetting about it once you hear it. It sort of connects with Biden’s base of older and unfashionable Democrats. And perhaps most of all, it works to own the elusive quality of “authenticity,” especially in fending off potential rivals for moderate votes like South Bend, Indiana, Mayor Pete Buttigieg and former New York City Mayor Michael Bloomberg.

Before launching the bus tour, Biden’s most famous malarkey moment came as a rejoinder to then-House Speaker Paul Ryan during the 2012 vice presidential debate. Ryan critiqued the Obama administration’s handling of the Benghazi attack and then launched into a larger criticism of Obama’s foreign policy, which he alleged was excessively weak. Biden characterized that as “a bunch of malarkey” because “not a single thing he said is accurate.”

Watching the exchange, it’s hardly a dominating Biden moment. He’s simply not a dynamo of charisma and the rejoinder to Ryan doesn’t feature any particularly eloquent turns of phrase. Elaborating on the malarkey charge, Biden stumbles over his words at several points — reinforcing the notion that his tendency to do this reflects his longstanding efforts to overcome a stutter more than the influence of aging — but he liked the word enough that he went back to it a second time during a later exchange.

Here, Biden initially calls Ryan’s claims “a bunch of stuff” prompting moderator Martha Raddatz to ask “what does that mean?” and Ryan to chime in that “it’s Irish.” Rather than elaborate that he’s saying it’s BS — i.e., bullshit — Biden says “we Irish call it ‘malarkey.’”

Back in 2015, Jamie Fuller conducted an exhaustive investigation for the Washington Post and concluded, citing Sunlight Foundation data, that Biden has said the word malarkey on the floor of Congress more than anyone since the 19th century.

“Malarkey,” then, is a legitimate Biden signature term. And as displayed at the debate it’s in many ways a useful one. Critically, it allows him to call Ryan a liar without literally doing so, while being much harsher than something like “you’re being misleading.”

And while linguists say the notion of an Irish origin for the term is seemingly inaccurate, it suits Biden’s persona as an old Irish American guy pretty well. But most important for its usage as a bus theme that was surely workshopped by a dozen campaign staffers, as a debate line it looks genuinely spontaneous — the word that popped to mind as Biden sought to avoid profanity. And there’s little campaigns work harder to achieve than the appearance of authenticity.

Joe Biden is old, and he knows it

The downside to running around using a word that was current in the 1920s is that it underscores the idea that Biden is extremely old.

Biden’s #NoMalarkey bus tour will be kicking off in #Iowa, followed by his #NoWhippersnappers rocking chair tour, and a quick swing through 1952.

#NoMalarkey is the greatest campaign slogan I have ever heard. I picture Biden’s rallies with flapper girls and men in suspenders and wicker hats doing the Charleston, while moving pictures and maybe even “talkies” screen on a white sheet in the background.

At the moment, however, Biden has the luxury of not caring about this. He is currently leading the polls without much in the way of youth support. Uniquely among the candidates in the field, he can afford to focus on pleasing his base rather than expanding it. The mockability of “No Malarkey” ensures it will get attention, and youngsters making fun of Biden for being old probably doesn’t hurt him with the older people he is counting on to power him to victory.

A larger strategic problem for Biden is that if he does become the nominee he, like any Democrat, will be faced with the need to try to work on mobilizing younger voters — a cohort that’s strongly anti-Trump but also sporadic in its participation in the electoral process. Running and winning in the primary on old guy identity politics will complicate that task. But for now, the job is to win the nomination.

“Authenticity” is a precious thing

Politics is inherently a performance and the idea of doing it “authentically” is as nonsensical as it is ubiquitous.

But a reputation for authenticity is a valuable thing in politics. In part it’s valuable simply because it tends to be admired on its own terms. But beyond that, it’s valuable because it helps you with one of the most inherently difficult problems in political life — the fact that to win elections you need the support of millions of people who disagree with you about some things.

There are simply too many issues and too many people in the country to assemble a winning coalition composed entirely of people who agree with you across the board. But you need people to agree that you’re a good person who’s worth supporting anyway. That’s much harder to achieve if people suspect your disagreements are driven by malice or corruption. If you’re seen as an “authentic” person, then disagreement is likely to be seen as itself authentic — reflecting a sincere good-faith disagreement about the best path forward rather than something nefarious — and therefore forgivable.

And “malarkey” is extremely authentic. It’s an odd word to use, but one that Biden has long been a frequent idiosyncratic fan of — including but not limited to high-profile occasions. Although it marks Biden as old and desperately uncool, he really is old and uncool — and at least he’s not faking it.

Your food delivery app comes at a cost to restaurants
Vox Sentences: “Is this person a citizen of the United States?”
Trump called governors “weak” and said they need to “dominate” George Floyd protesters
Top UN human rights official rebukes Trump’s press attacks as “close to incitement of violence”
The coronavirus may hit rural America later — and harder
America’s monopoly problem, explained by your internet bill