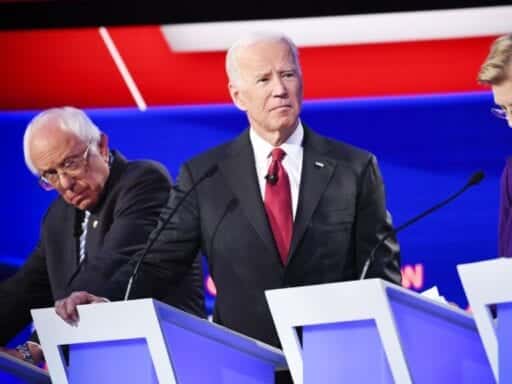 Elizabeth Warren and Andrew Yang clashed over a highly misunderstood issue during the Democratic debate.

Democrats tackled several issues on the debate stage Tuesday night that had previously gone untouched. One of those was automation — the idea that robots and technology will replace workers and destroy jobs.

It prompted a confusing discussion about whether automation is actually killing jobs or whether free trade policies are. And it didn’t offer up much of a clear answer.

CNN moderator Erin Burnet cited a study predicting that a quarter of US jobs will be lost from automation, then asked a few of the candidates what they would do to prevent such job losses.

Sen. Bernie Sanders said guaranteeing a federally funded job for every person is one solution. Andrew Yang pointed to his universal basic income plan. But things got testy when the moderator turned to Sen. Elizabeth Warren, who downplayed the impact of automation on jobs:

Yang didn’t like that answer. His entire campaign for universal basic income is based on the idea that robots will take away everyone’s livelihood.

“Senator Warren, I have been talking to Americans around the country about automation. They are smart. They see what’s happening around them. The stores are closing,” Yang responded. “They see a self-serve kiosk in every grocery store, every CVS. Driving a truck is the most common job in 29 states, 3.5 million truck drivers in this country. My friends are piloting self-driving trucks.”

Whether or not machines or free trade are responsible for destroying US jobs is an understandable disagreement. Economists have been having this same discussion for decades, ever since President Bill Clinton signed the North American Free Trade Agreement in 1994, which opened up free trade between Canada, Mexico, and the United States for the first time.

Here’s the truth: Neither automation nor trade policies are responsible for overall job losses in the past few decades, generally speaking. But globalization (a.k.a. free trade) is more to blame for the decline of manufacturing jobs in the US than automation is.

Another thing: No one has any clue how many future jobs may be lost to automation; the estimates vary wildly and the methodology for trying to guess is questionable.

Let’s break it down.

1) The impact of automation on jobs is overblown

The reason why so many people say robots will take our jobs one day is because that’s what economists and politicians have believed for the longest time. They worried that subway ticket machines would cause mass unemployment in the transportation industry. They also worried that concrete mixers would lead to fewer construction jobs. Those fears never materialized.

In the 1990s and 2000s (post-NAFTA), there was a sharp decline in factory jobs and it coincided with a huge surge in productivity. So factories were producing more or the same, but with far fewer workers. That led economists to believe that technology was displacing workers and creating more efficiencies that, in turn, made factories more productive with fewer employees. But they could never prove that automation was the direct cause.

Recent research suggests this theory of displacement is wrong. A 2018 study by economist Susan Houseman at the W.E. Upjohn Institute for Employment Research explains that the surge in productivity has been limited to the computer and electronics industry.

“Without the computer industry, there is no prima facie evidence that productivity caused manufacturing’s relative and absolute employment decline,” Houseman writes. In her paper, she also reviewed the latest research on the subject and concluded “that trade significantly contributed to the collapse of manufacturing employment in the 2000s, but finds little evidence of a causal link to automation.”

Just take a look at NAFTA. In the US, NAFTA didn’t lower overall US wages as some feared, but it was linked to lower wages in some manufacturing jobs. The trade deal was also directly responsible for the loss of more than 840,000 US factory jobs, most of which were moved to Mexico. Just last year, Ford announced it was closing one of its auto factories and opening another one in Mexico.

US companies are still doing this because factory workers in Mexico are still making poverty wages.

Economists Scott Andes and Mark Muro at Brookings also point out that other countries with high productivity growth in recent decades haven’t seen a similar steep decline in manufacturing jobs as the US has seen.

“The evidence suggests there is essentially no relationship between the change in manufacturing employment and robot use,” they write.

This helps explain why no one seems to agree on how many jobs will disappear in the future.

Study after study is published every year warning the public about the looming threat of robots. The McKinsey consulting firm estimates that automation could kill 73 million US jobs in the next 10 years. The Organisation for Economic Co-operation and Development (OECD) estimates 13.6 million lost US jobs. Nearly a dozen separate studies say it could be anywhere from 3 million to 80 million. That’s a huge difference.

Yet the headlines that follow are always a variation of “Robots are coming for your job.”

But these studies are flawed, mostly because they depend on surveys of managers and business owners. They are usually asked to guess how many of the jobs at their business will likely be replaced by machines in the near future. Their answers are often just that: a guess.

Often, the studies try to predict market trends that are impossible to predict.

“I have dedicated my career to worrying about the labor market. … I am not worried about this,” Heidi Shierholz, senior economist at the Economic Policy Institute told Vox’s Joss Fong.

So will a quarter of all US jobs really disappear, as one of the debate moderators suggested?

No one has a damn clue.