No Senate Republicans have backed an impeachment conviction — yet 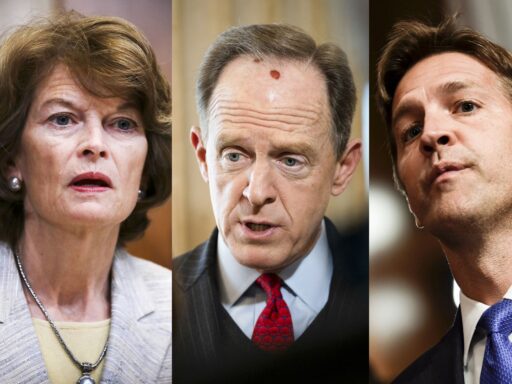 These lawmakers are the Senate Republicans to watch on impeachment.

Senate Republicans may be comfortable condemning President Donald Trump’s role in fueling the attack at the Capitol last week, but it’s unclear if they have the will to do much more.

Thus far, just two Republican senators — Lisa Murkowski (R-AK) and Pat Toomey (R-PA) — have called for Trump’s resignation, while only one — Sen. Ben Sasse (R-NE) — has said he’ll consider articles of impeachment. No Republicans thus far have committed to convicting the president in an impeachment trial yet.

Whether or not that changes will reveal just how willing Republicans actually are to hold the president accountable. The House, this week, is expected to impeach Trump for the second time, charging him with the incitement of an insurrection. Once they do, a conviction in the Senate will hinge on Republican support: 67 votes are needed in the upper chamber to convict the president, meaning at least 17 Republicans will have to join with the 50-person Democratic caucus in order to reach that outcome once incoming Sens. Jon Ossoff (D-GA) and Raphael Warnock (D-GA) are seated.

At this point, while Republicans have broadly denounced the violent acts of rioters last week, none have yet signaled if they’ll take a further stand against the president’s actions — with some suggesting they’d simply like to move on. Last year, Sen. Mitt Romney (R-UT) was the only Republican who voted to convict Trump on an article of impeachment.

What Republican lawmakers have said so far

There aren’t any Senate Republicans who’ve backed convicting the president of impeachment articles so far, though a handful — Murkowski, Toomey, and Sasse — have expressed concerns about his conduct. Other senators to watch include Romney and Susan Collins, the only two Republican lawmakers to vote in favor of calling witnesses for the Trump impeachment trial last January.

We’ll be tracking statements as they come in from various senators.

A recent Murkowski interview with the Anchorage Daily News did not cover whether she’d support impeachment, though it did feature an explicit call for Trump’s resignation. Murkowski has also raised questions about whether she’ll continue to align herself with Republicans in the Senate, but she’s said she won’t be joining the Democratic Party.

“I want him out. He has caused enough damage,” she said regarding Trump. “I think he should leave. He said he’s not going to show up. He’s not going to appear at the inauguration.”

Toomey, a Pennsylvania lawmaker who is retiring after this term, was the second Republican Senator to press for Trump’s resignation — but he’s cast doubt on the timing around an impeachment process and said there isn’t sufficient time to remove the president prior to President-elect Joe Biden’s inauguration. (Democrats have said the impeachment process is about ensuring that Trump faces consequences for his actions, even if the trial takes place after he’s left office already.)

“I think the best way for our country, Chuck, is for the president to resign and go away as soon as possible,” Toomey said on NBC’s Meet the Press this past weekend. “I don’t think there’s time to do an impeachment — there’s 10 days left before the president leaves anyway.” Previously, during another press appearance on Fox News, Toomey acknowledged that Trump committed “impeachable offenses,” but worried the House Democrats would “politicize” an impeachment process.

WATCH: Sen. Pat Toomey (R-Pa.) tells Meet the Press, “the best thing would be a resignation” from President Trump. #MTP@SenToomey: “The best way for our country is for the president to resign and go away as soon as possible” pic.twitter.com/uBjXHaRC3s

Sasse is one of the few Senate Republicans who has addressed impeachment directly, though he has stopped short of saying how he’d vote on conviction. The most he’s offered so far is that he’ll “consider” the articles if and when the House sends them over to the Senate.

“The House, if they come together and have a process, I will definitively consider whatever articles they might move because as I’ve told you, I believe the president has disregarded his oath of office,” Sasse said during a CBS This Morning appearance last week. “He swore an oath to preserve, protect, and defend the Constitution. He acted against that. What he did was wicked.”

Republican Senator Ben Sasse of Nebraska has blamed President Trump for the violent assault on the Capitol, calling it an “inevitable and ugly outcome.”@SenSasse joins us now. pic.twitter.com/bZHDKuXEWx