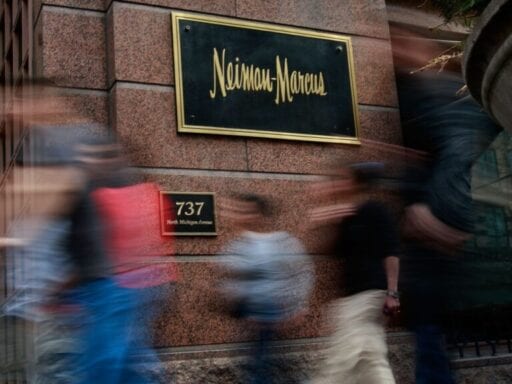 Neiman Marcus could file for Chapter 11 as early as this week.

The first department store casualty of the coronavirus pandemic is here: Dallas-based luxury chain Neiman Marcus is expected to file for bankruptcy as soon as this week, according to a Reuters report. Sources familiar with the matter said the decision was due to the economic crisis caused by Covid-19.

This isn’t unexpected. After all 43 Neiman Marcus locations were temporarily closed on March 17, Bloomberg reported on March 23 that the company was in talks with lenders about filing for bankruptcy to ease its $4.3 billion in debt. It is also reportedly in the process of securing a loan from creditors for hundreds of millions of dollars to sustain operations throughout the bankruptcy proceedings. Meanwhile, a majority of its 14,000 employees are currently furloughed.

By filing for Chapter 11 bankruptcy protection, Neiman Marcus can remain in business while closing underperforming stores. It’s unclear if there is a plan for after the filing — many businesses that go bankrupt don’t necessarily go away. Vox has reached out to Neiman Marcus for comment.

It’s far from the only retailer feeling the pressure of the pandemic. While big-box stores that sell groceries and other staples, like Walmart, Target, Costco, and Kohl’s, have been less impacted than some predicted, clothing-focused stores are under serious financial strain. Retail sales fell 8.7 percent in March, the largest drop ever on record, and clothing and accessory sales dropped most of all, by 50.5 percent.

So far, Gap has canceled its orders for the fall season. JC Penney and Nordstrom are rumored to be filing for Chapter 11 if store closures extend into summer. Macy’s has furloughed the majority of its nearly 130,000 employees. Rent the Runway laid off its entire in-store staff over Zoom. Though brands have focused their efforts on e-commerce sales, most retailers say they’re not expecting online orders to make up for the loss of in-store purchases, according to a report from market research firm Forrester and retail platform Narvar.

“Retail has hung a closed sign on the door literally and metaphorically,” Neil Saunders, managing director of GlobalData Retail, told the Associated Press. “This is the most catastrophic crisis that retail has faced – worse than the financial crisis in 2008, worse than 9/11. Almost overnight, the retail economy shifted from being about things people want to things that they need.”

It’s not like the brick-and-mortar retail business was booming before the coronavirus pandemic, either. For the past decade, Americans’ shopping habits have drastically shifted, thanks to the advent of online shopping, same-day delivery, and direct-to-consumer startups. While many stores have invested in turning their locations into “experiences,” corporate behemoths like Sears, Family Dollar, Toys R Us, Claire’s, Forever 21, and Payless have struggled to adapt to customers’ expectations.

What’s been called the “retail apocalypse” over the last 10 years is rapidly accelerating due to coronavirus. Analysis from retail industry tracker Coresight Research suggests that more than 15,000 stores in the US could permanently shutter, up from the 9,500 that closed their doors last year.

If the great American department store was already in decline, coronavirus may be what finishes the job. It’s almost certain that Neiman Marcus is just the beginning.

Cesar Sayoc, who sent explosives to Trump critics, just received a 20-year sentence
The Trump administration’s war on birth control
Mike Pence on whether he wants to overturn Roe v. Wade: “I do”
The World War II food memoir that’s getting me through life in a pandemic
A Democratic senator wants to protect federal contractors — the people most screwed over by the shut...
The hottest new thing in sustainable building is, uh, wood