Noise pollution is everywhere. And the health effects are real. 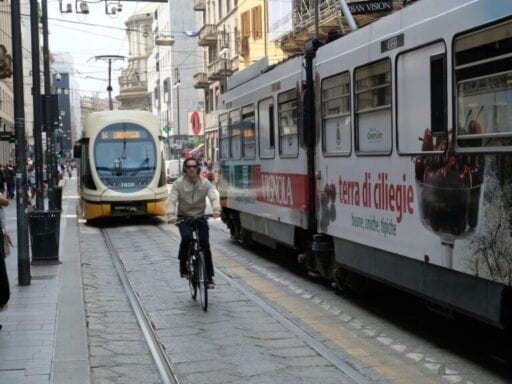 Share
Loading...
A man listening to music on his headphones cycles between two tram cars in the city centre on May 24, 2019 in Milan, Italy.  | Photo by Kaveh Kazemi/Getty Images

Listen to Today, Explained to learn how noise impacts your everyday life.

Noise is an extremely old problem. The earliest recorded noise complaint is 4,000 years old. In the Epic of Gilgamesh, one of the gods was so irritated by the racket caused by humans that he exterminated them. There are examples of people killing each other in part because they were fed up with noise. Noise has even been used as a weapon by the US military; heavy metal was blasted at dictator Manuel Noriega’s hideout to force him to surrender, explains The Atlantic contributing writer Bianca Bosker on this episode of Today, Explained. (It worked.)

Noise has health implications, too. As Vox senior health correspondent Julia Belluz previously reported, noise pollution has become a major, underappreciated threat to hearing. Everything from the music in spinning classes to the chatter in restaurants can take a toll on our bodies.

To learn more about how noise impacts our everyday lives, here’s a lightly edited transcript of Bianca Bosker’s conversation on Today, Explained.

Is there a technical definition of noise? What’s the best way to think about it?

There are various definitions of noise, but noise is slightly different from sound noise. Already that word implies sound with a judgment, right? Sound that is annoying, sound that is disturbing. And part of what makes noise such a difficult thing to fight is that it is subjective. I spoke with an acoustic expert who described it to me as, “Sound is when you mow your lawn, noise is when your neighbor mows their lawn, and music is when your neighbor mows your lawn.”

What’s tricky about noise as a kind of foe is that it doesn’t leave a trace. It vanishes when you go after it. It’s hard to measure. It’s hard to describe. And again, it’s subjective. You know, your music literally sometimes, right … if you’re living in an apartment with your neighbors, blasting music is oftentimes my noise.

One thing to also keep in mind is that noise isn’t necessarily loud. I think a lot of us had this idea that sound has to be at a really high volume to drive us crazy. And if you ever tried to sleep through, like, a dripping faucet, you know that something can be very quiet and still drive you up the wall.

So [noise] can be annoying for people. But is it actually bad? Is it bad for health?

There [are] certain short-term effects of noise. In response to noise, we release stress hormones, our blood pressure goes up, our heart rate rises, and our body can respond to noise, especially at night, as low as around 33 decibels, which is around as loud as a purring cat.

Studies have shown that over long periods of time, prolonged exposure to noise can lead to a higher risk of high blood pressure, coronary heart disease, heart attacks, strokes, diabetes, dementia, depression. It can be very harmful to children. There was a landmark study that was done in the ‘70s, there were two classrooms in a school in New York, one of which was very close to the clatter of a subway track. And they found that the reading level of that noisy classroom was actually around a year behind that of students in a quieter classroom. And that difference disappeared once they installed some noise abatement to reduce the sound.

Is it mostly affecting people that live in cities? Is it affecting certain types of populations differently?

Noise levels tend to be higher in poorer communities, as well as neighborhoods that have higher populations of black, Asian, and Latino residents. In fact, these researchers thought that their numbers might actually underestimate the difference, because people who are wealthier probably take soundproofing measures to even further protect themselves from any noise that may exist.

Like you’re paying a premium for silence when you pay more for housing, or something.

Or even quiet. That quiet is something that’s only accessible to people who work on lush corporate campuses, or have the money to go to stores, or a silent yoga retreat, or you name it to escape.

Noise can have an undue burden on people that don’t have the resources to protect themselves from it.

Again, we often think about noise as being this kind of 1 percent problem, something that people, you know, they complain about the leaf blowers at their vacation homes. But in fact, noise can have an undue burden on people that don’t have the resources to protect themselves from it. There really is a concern that silence and quiet is becoming a luxury.

I imagine there are different laws in different places about this. Is there, like, a national law against noise in any way?

The federal government briefly had an appetite for noise legislation in the ‘70s. In 1972, the Nixon administration passed a federal noise statute designed to quiet the country. But in 1981, just nine years later, the Reagan administration withdrew funding for that. And so since then, as one of these noise experts put it, the federal government has essentially been out of the noise business, and the burden has fallen to local governments to really take charge on quieting their constituents.

So if the burden is falling to local communities, what kind of regulations do they have? How do you stop things like this?

If a dog is barking for three continuous minutes at 2 in the morning, I think technically it’s okay. But there are noise researchers who argue that even with these measurements, we may not be measuring noise correctly. Noise codes tend to not put as much weight on, let’s say, very low frequency noise that can: a) travel very far distances, and b) can be felt. I mean, low-frequency noise, that’s things like the rattle from a subwoofer or the thudding of a bus outside … things that you may feel more than you can actually hear them.

Okay, so just to be clear, it’s really noisy out there and the regulations we do have aren’t exactly doing much. Do we just have to get used to a noisy world?

We insulate ourselves from outside noise by giving ourselves personal noise.

It’s important to appreciate the way that the nature of noise is changing. It used to be that a lot of the noise was created by the human hand. We were ringing bells, we were driving carriages, we were crying as town criers. And now, when you look at the noise, it’s being produced. One thing that’s kind of chilling is the way that it’s become autonomous. Machines are an inexhaustible source of noise. Their vocal cords don’t tire. They don’t need to take a break. They can just keep going and they can be amplified.

Because we have become so surrounded by noise, a lot of us have responded by adding our own noise to it. We insulate ourselves from outside noise by giving ourselves personal noise. We listen to podcasts. We listen to music. And so, in some ways, that may not be helping the problem. I mean, I do want people to listen to the end of this podcast.

But you know, I also think that in some ways we’ve reacted defensively to noise by adding more noise. It raises the question of, if we took out our earphones, if we had to listen to the sound of our cities, of our environments, what do we hear? Do you like it? Are we bothered by it? And if we are bothered by it, let’s do something about it.

Austin can’t stay weird
These 4 ABC and Univision reporters will moderate the third Democratic debate in Texas
Vox Sentences: Meddling in the midterms
The US has abandoned asylum seekers in Mexico during the coronavirus pandemic
A crucial federal program tracking dangerous diseases is shutting down
State Dept. on immigration, Kim Jong Un in China