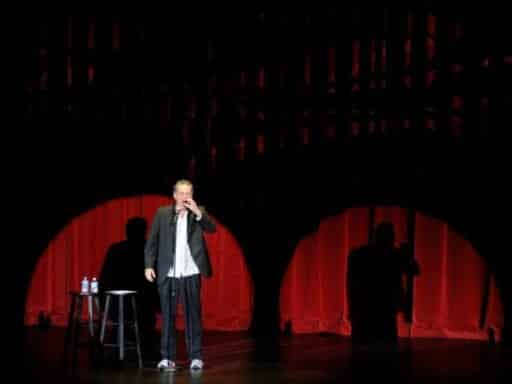 “Of course, people will go, ‘What about the victims?’ But you know what? The victims didn’t have to go through that.”

On Tuesday, comedian Norm Macdonald spoke to the Hollywood Reporter in defense of nonpolitical comedy. In the process, he got very political.

Over the course of the interview, Macdonald touched on the #MeToo movement — he said he’s glad it has “slowed down a little” — and said how deeply sorry he feels for people who’ve faced consequences after admitting wrongdoing in their actions and statements. He specifically lamented the plights of his friends Louis C.K. and Roseanne Barr, having “gone through what they have, losing everything in a day.”

Macdonald also said he really doesn’t think Donald Trump’s presidency has been that disastrous, and dismissed the idea that Trump’s election has emboldened racist attitudes throughout the country.

The whole thing got so political, in fact, that The Tonight Show canceled Macdonald’s Tuesday night appearance, despite the fact that MacDonald spent a good chunk of his interview trying to defend host Jimmy Fallon.

Macdonald was ostensibly promoting his upcoming Netflix series, Norm Macdonald Has a Show, and he wanted to defend the idea that his show, like Fallon’s, doesn’t have to have a topical angle. “Ever since Jon Stewart, late-night hosts have all been forced to become political pundits, you know? Even down to Jimmy Fallon,” Macdonald said, referring to the infamous time Fallon had then-candidate Donald Trump on the show and ruffled his hair.

“To be maligned for quote-unquote humanizing Trump. Funny, I thought he was a human,” Macdonald said. “If you have the nominee to be president on your show and he is your guest, then he is your guest. Don’t have him on the show if you don’t want him.”

The Tonight Show apparently decided quite swiftly that it did not want Macdonald.

“Out of sensitivity to our audience and in light of Norm Macdonald’s comments in the press today, The Tonight Show has decided to cancel his appearance on Tuesday’s telecast,” NBC said in a statement.

Before his appearance was canceled, Macdonald had issued a tweet apologizing for his statements, saying that he was “deeply sorry” if it sounded as though he were belittling the people hurt by Barr and C.K.

Roseanne and Louis have both been very good friends of mine for many years. They both made terrible mistakes and I would never defend their actions. If my words sounded like I was minimizing the pain that their victims feel to this day, I am deeply sorry.

On the whole, Macdonald’s comments were met with widespread backlash. As the Washington Post summarized, the consensus response was that the interview was “an absolute mess,” “embarrassing,” and “insensitive.” Macdonald’s fans, however, continued to vocally support him. “You spoke the truth,” one tweeted. “Never stop.”

But the interview, the public response, and Macdonald’s oblivious apology illustrate how a way of thinking about the world can disguise itself as nonpartisan, nonpolitical “common sense,” when in fact it is deeply political. And what makes such a disguise possible is that it’s a way of thinking that is so dominant that it obscures its own ideology.

Here are the assumptions embedded in Macdonald’s interview, and why they have made so many people angry.

Macdonald argued that Trump has caused no lasting damage

“It seems that the framers of this republic figured out how to make it bulletproof to this type of interloper,” he told THR. “I don’t know what [lasting damage] you could point to except, you know, the Supreme Court judge nomination, which is certainly not an anomaly: I mean, a right-wing guy is going to put in a right-wing guy.”

There’s a certain luxury in being able to say that adding Brett Kavanaugh to the Supreme Court is “not an anomaly”; it suggests that the possibility of the Supreme Court overturning Roe v. Wade, a decision that would affect the reproductive freedom of more than half the population, is really no big deal.

But the idea that Trump has caused no lasting damage over the course of his administration also overlooks everything that has happened in Puerto Rico, where the death toll after Hurricane Maria is hovering around 3,000 and where the electricity just came back two weeks ago. Just this week, Trump has described his administration’s response to Hurricane Maria as “a fantastic job.”

To be able to make the claim that the Trump administration hasn’t really hurt anyone, you would need to think that the damage done to women and brown people doesn’t really count.

“I never really bought into this notion that everybody is racist — because there was a black president, you know?” Macdonald said. “But the Sacha Baron Cohen show has been a frightening eye-opener.”

When America had a black president, a major part of the national conversation centered on how often black people are killed by the police. Having Barack Obama in office did not make those statistics magically go away. Refusing to believe that racism exists until a comedy sketch show opens your eyes suggests, again, a sense that the documented damage done to black people isn’t all that important. That it’s something you can safely ignore.

Macdonald suggested that #MeToo has gone too far

“The model used to be: admit wrongdoing, show complete contrition and then we give you a second chance,” said Macdonald. “Now it’s admit wrongdoing and you’re finished. And so the only way to survive is to deny, deny, deny. That’s not healthy — that there is no forgiveness.”

Incidentally, Macdonald’s new show is produced by David Letterman, who admitted to initiating sexual relationships with his employees in 2009, suggested it was no big deal, and continues to have a healthy career to this day amid allegations that he created a hostile workplace for women.

“There are very few people that have gone through what they have, losing everything in a day,” he said. “Of course, people will go, ‘What about the victims?’ But you know what? The victims didn’t have to go through that.”

This is the part of the interview that’s drawn the most outrage, and for which Macdonald sort of semi-apologized. (He’s sorry if you’re offended, anyway.) But it’s worth looking closely at what’s being assumed here.

First, Macdonald’s statement assumes that professional standing is “everything,” and that without Barr’s show or C.K.’s comedy specials and FX shows, they find themselves utterly destitute and resourceless. But both Barr and C.K. are extremely wealthy and well-connected, and they remain so even when the audience for their comedy isn’t there.

Second, it suggests that the career damage suffered by Louis C.K’s victims does not actually count, that the up-and-coming comedians who found themselves in a dangerous work environment when they were targeted by someone they looked up to and admired, and who experienced death threats after they came forward about what happened, is somehow less meaningful than the consequences suffered by the person who hurt them. It suggests that the damage done to victims of sexual harassment does not really count.

All the statements Macdonald made in the interview suggest an ideology where only the experiences of people like him are valid: where Trump’s presidency does no damage because it hasn’t personally affected Macdonald, where racism does not truly exist in a nation that is willing to elect a black president, and where the pain of a comedian who lost a job matters more than the people that comedian hurt.

But because Norm Macdonald is wealthy and famous and white and male, he can think of that ideology as nonpolitical and as common sense, because until very recently, people like Norm Macdonald were the ones who were setting the conversation. Everyone else was what Macdonald refers to as “the lunatics.”

That’s how you end up with a very political conversation like this in a non-topical interview.

The violent protests in Iraq, explained
On Instagram, there’s an influencer for everything. Even pumpkins.
The Dark Crystal prequel’s genocidal puppets are terrifyingly effective
A guide to how 2020 Democrats plan to fight climate change
The 4 key things to watch for at the Trump-Putin summit
Gretchen Carlson’s Miss America 2.0 promised empowerment. It mostly delivered.