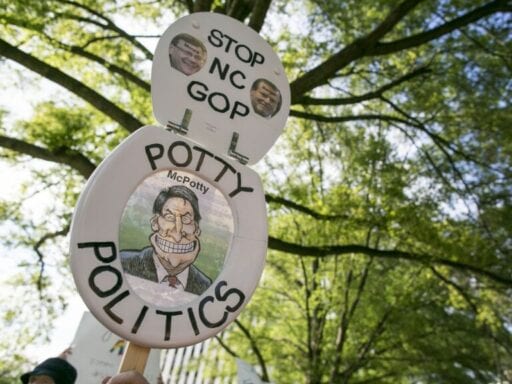 September 11 was a chaotic day in the North Carolina state legislature.

September 11 was supposed to be an uneventful day in North Carolina’s state capitol. Instead, it became a case study in the lengths Republican lawmakers in the state are willing to go to push through their agenda.

The state legislature was in session Wednesday morning, but Democrats were told there wouldn’t be any votes. So some lawmakers joined Democrat Gov. Roy Cooper at a ceremony for the victims of 9/11. Others stayed in their districts. Democrat state Rep. Grier Martin told me he took the time to go on a run.

Only nine Democrats went to the floor of the General Assembly. They were met with 55 Republicans ready to stage what Democrats are now calling a political ambush.

North Carolina has a Democratic governor. But the state legislature is controlled by Republicans. Since late June, the state has been stuck in a legislative impasse; Cooper vetoed a two-year budget bill, arguing it underpaid teachers, awarded unnecessary giveaways to corporations and failed to include a Medicaid expansion. Republicans have been itching to override his veto ever since, unwilling to negotiate health care for low income North Carolinians.

But as of last November, state Republicans lost their veto-proof majorities in the state legislature, when Democrats flipped 16 seats across the state Assembly and Senate. On September 11, Republicans in the General Assembly saw their opportunity. Half of the chamber was empty. They voted to override Cooper’s veto. Now it goes to the state senate, where Republicans need one Democrat to join their ranks to officially override the veto.

“Basically, we have to stand guard on the floor,” Democratic state Sen. Jeff Jackson said.

On one hand, this is a story about political gridlock. “We are in a better in place with North Korea than we are with these guys on Medicaid,” Jackson said of budget negotiations.

But what happened Wednesday is the result of a win-at-all-stakes mentality that’s come to define the North Carolina’s Republican party in recent years. Last week, North Carolina’s state court ruled the state’s legislative district map unconstitutional; “extreme partisan gerrymandering,” it said, has allowed Republicans to control 29 out of 50 state Senate seats and 65 out of 120 state House seats despite having received less than half the vote overall.

“This is what happens when you have a General Assembly elected by illegal districts,” Democratic state Rep. Grier Martin said. “They act in a way that is not representative of North Carolina.”

The floor of North Carolina’s General Assembly quickly spun into chaos Wednesday morning, when Republicans capitalized on Democrats’ absences to push their agenda. The few Democrats present tried to speak against the vote, only to see their microphones shut off.

“This is a tragedy. This is a travesty of the process and you know it,” Democratic state Rep. Deb Butler yelled on the floor of the legislature as the House speaker took the vote. “Mr. Speaker, how dare you, Mr. Speaker.”

Republicans in the state have shrugged off accusations of political ambush, chalking it up to mere miscommunication.

“I’ve made it clear, I’ve said right here from where I am on the floor, everywhere, if I see an opportunity to override this budget, this veto, I was going to take that vote,” Republican House Speaker Tim Moore told local reporters. “Under our rules, we took a vote on the override. It was properly noticed, procedures properly followed and we took the vote. And I think it’s a great day for North Carolina because we finally are a step closer to having a budget.”

In the week after his veto, Cooper proposed a compromise budget bill, which removed corporate tax cuts, increased teacher pay, and expanded Medicaid. But negotiations over the budget have been in fits and starts. And North Carolina Republicans have put a vote to override the veto on the calendar every day of this legislative session. That doesn’t mean it actually comes up for a vote. It just means it can.

For weeks, state Democrats have been diligently keeping tabs on public notices from Republican lawmakers as to whether the legislative session days will have votes or not.

Democratic leaders said the Republican chair of the rules committee assured him there wouldn’t be any votes until Wednesday afternoon. Republicans deny that ever happened. Vox asked several Republican members of the state legislature for comment.

“In the end, this place functions on trust and on a certain level integrity, and that has been violated,” Martin said.

“They know they are sacrificing their credibility going forward and that they will never be trusted again,” Jackson said.

Underlying this episode is a long history of partisan plays that’s roiled North Carolina state politics. Democratic lawmakers will admit, there have been abuses by both Democrats and Republicans in the state. Recently, Republicans have been pushing the boundaries.

When Democrats managed to elect Cooper to the governor’s mansion in 2016 — one of the few bright spots for Democrats in a year that was dominated by Donald Trump and Republican victories — their wins were spoiled by the Republican state legislature.

Within 48 hours of Cooper’s victory, the Republican-controlled state legislature called an emergency session under the guise of disaster relief only to pass a series of bills that pulled Cooper’s ability to make key cabinet appointments without their approval, drastically cut the size of Cooper’s administration, and changed the Board of Elections so that Republicans would control it in election years. They ensured lawsuits had to first go through the Republican-controlled appeals court, before the Democratic-majority state Supreme Court.

Cooper, and state Democrats, have been fighting these changes since. They’ve been successful on some fronts; for instance, the state Board of Elections move was ruled unconstitutional. But Cooper’s administration has been reduced to trying to energize the people of North Carolina to fight an explicit Republican power grab, while trying to battle the GOP-controlled legislature in the courts as well. Democrats chipped away at Republicans’ supermajority in 2018, giving Cooper veto power.

But the game was rigged against them from the start. Republicans hold the power in both chambers of the state legislature because of district lines that a state court has deemed unconstitutional and undemocratic.

Recently discovered files showed that GOP strategist Tom Hofeller, who died in 2018, drew the maps in North Carolina Republican Party’s headquarters specifically using prior election results to “construct the district boundaries to advantage Republicans,” according to the court ruling. The new maps must be redrawn by September 18, lawmakers can’t use data to try to draw a partisan advantage, and the redrawing process must be public. (In fact, the state legislature wasn’t even negotiating the budget Republicans voted on this week — they have been preoccupied with that redrawing process, according to several state legislators.)

This is big for Democrats in the state who keep being having to deal with barefaced displays of partisanship. Wednesday’s vote is just their latest reminder that North Carolina’s Republicans have written the playbook on partisan power grabs for gerrymandered state legislatures across the country — like Wisconsin and Michigan.

“They say politics ain’t beanbag but this is a pretty egregious power play which doesn’t speak well of the North Carolina Republican legislators,” Rick Hasen, a legal expert with University of California Irvine, told Vox in an email.

Without much power to change the state House vote, one state lawmaker said only that voters — soon to be casting ballots in redrawn districts — are watching.

“I think if anything more people in North Carolina are going to be paying very close attention to what [is happening the state capitol],” Democratic state Rep. Chaz Beasley said. “This could and will backfire on them majorly.”

The woman in line to be Puerto Rico’s next governor says she doesn’t want the job
Trump is getting free advertising for his golf course out of his UK trip
2020 was supposed to be a big year for marijuana legalization. Then coronavirus happened.
Rep. Katie Hill resigns after allegations of improper relationships
A conservative activist is under fire for calling out Republicans on coronavirus spread
The coronavirus exposes the history of racism and “cleanliness”