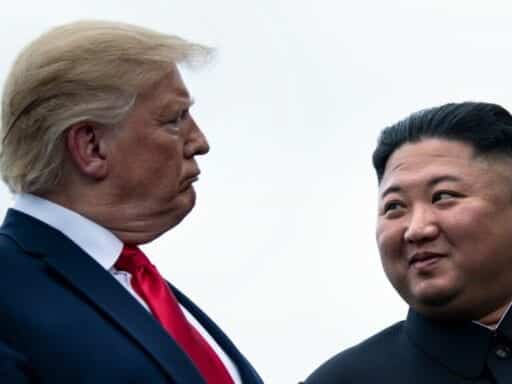 Trump called the exercises “ridiculous and expensive,” echoing complaints North Korea has made about the exercises the allies had long conducted to ensure they are both prepared to counter threats — particularly North Korean provocations — in the region.

In his tweets, the president also referred to a letter he received from Kim on Friday that he said contained a “small apology” for the tests of short-range weapons, all of which had the ability to strike South Korea and other allies in the region, like Japan. Many experts believed the tests were Kim’s way of protesting the US-South Korean exercises, and Trump said the North Korean leader admitted to as much in the letter, writing Kim promised him “that this testing would stop when the exercises end.”

In a letter to me sent by Kim Jong Un, he stated, very nicely, that he would like to meet and start negotiations as soon as the joint U.S./South Korea joint exercise are over. It was a long letter, much of it complaining about the ridiculous and expensive exercises. It was…..

….also a small apology for testing the short range missiles, and that this testing would stop when the exercises end. I look forward to seeing Kim Jong Un in the not too distant future! A nuclear free North Korea will lead to one of the most successful countries in the world!

Friday evening, Trump praised the letter when speaking to reporters. “He really wrote a beautiful, three-page — I mean, right from top to bottom — a really beautiful letter,” Trump said.

Perhaps because of his approval of the communique, North Korea launched two more projectiles from the east coast city of Hamhung just hours after Trump said he received the letter, the New York Times reported. The newest launch followed a weapons test on Tuesday in which North Korea launched two short-range ballistic missiles and three other launches in the last few weeks, as well as the unveiling of a new submarine in late July that could be used to launch nuclear weapons.

As Kim apparently admitted in his letter, the launches are a blatant attempt to get Trump’s attention, Vox’s Alex Ward reported:

But the motive is more apparent: North Korea is really angry at Seoul and Washington. A statement from a North Korean Foreign Ministry spokesperson on Monday afternoon blasted the US and South Korea for holding a long-planned military exercise, although it was scaled down to lower tensions with Kim’s regime.

That clearly hasn’t worked. “Despite our repeated warnings, the United States and South Korean authorities have finally started the joint military exercise targeting the DPRK,” the spokesperson said. “Its aggressive nature can neither be covered up or whitewashed in any manner.”

North Korea is opposed to the exercises because it views them as preparations for war and possibly as harbingers of future attacks. South Korea, on the other hand, sees the exercises as a way to confirm its capabilities, to prepare for its defense against any aggression, and to ready its officers for the eventual transfer of control of the Korean-US combined forces.

South Korea has urged its northern neighbor to stop the tests, but has had little support from Trump, who has has been downplaying the tests as “smaller ones” because they didn’t include an intercontinental ballistic missile or a nuclear weapon. Experts told Ward they believe Trump is hesitant to challenge Kim on the weapons tests because he fears doing so could spoil his relationship with the North Korean leader, and that the president believes North Korea is more likely to agree to stop its nuclear program if his relationship with Kim remains positive. Whether that calculus is correct remains to be seen.

The US and North Korea have been deadlocked for months in negotiations over shutting down Pyongyang’s nuclear program.

North Korea wants that to stop, and the US wants North Korea to stop building nuclear weapons. But they’re caught at an impasse — Trump and Kim both want the other to put up their end of the bargain first.

But so far, the delay in talks and the sanctions have had an effect on the region as a whole, Ward notes:

Meanwhile, those sanctions have impeded South Korea from building closer political and economic ties with its neighbor. Put together, North Korea remains under financial strain with no prospects of reversing its fortunes any time soon.

Trump is optimistic the two countries will come to an agreement; he told reporters Friday “I think we’ll have another meeting.”

And his commitment to Kim is strong; Trump has called the North Korean leader a “friend” who has a “great and beautiful vision for his country.” North Korea has been named one of the most repressive countries on earth under Kim and his family’s leadership. Basic freedoms such as expression, religion, and assembly are suppressed and the government operates secret prison camps where political opponents are sent to be forcibly worked, tortured and starved, according to nonprofit group Human Rights Watch.

In siding with Kim over ally South Korea, which has said the exercises are important to maintain combat readiness, Trump appeared to continue a trend of supporting adversaries over allies (and other branches of his administration), from reversing restrictions placed on Chinese tech giant Huawei to joking with Russian leader Vladimir Putin about his country’s meddling in US elections.

Duyeon Kim, a North Korea expert at the Center for a New American Security think tank in Washington, told Ward it’s possible the administration is “picking their battles to focus on resuming much-needed negotiations for a deal,” but warned, “if they continue to dismiss smaller missiles for long, they’re enabling Pyongyang to strengthen these dangerous weapons and telling South Korea and Americans living there that they don’t matter.”

Watch: Nobel Prize-winning efforts show stars orbiting the black hole at the center of our galaxy
Democrats capture Georgia US House seat held by Republicans since 1995
The recent spike in tensions between India and Pakistan, explained
It’s official: Trump and Kim Jong Un will have a second summit
Who’s going to win the Nevada caucuses, according to the polls
Inception is the most imperfect of perfect movies. 10 years later, I still love it.