North Korea kept long-range missiles out of its military parade. It could be a good sign for nuclear talks. 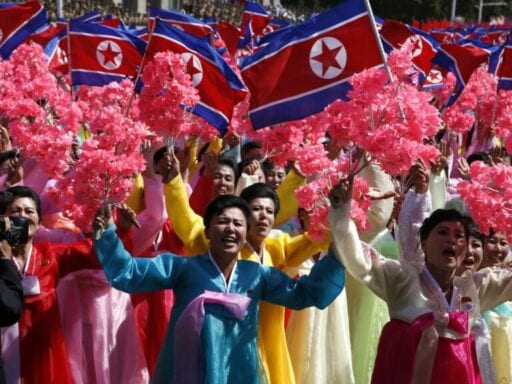 At least Trump thinks so.

North Korea had a military parade celebrating the 70th anniversary of its founding, and what was in it — or, rather, what wasn’t in it — could bode well for nuclear deal talks with the United States. What was missing? Its intercontinental ballistic missiles.

ICBMs have been a prominent feature in previous such events, but this time around, they weren’t. The two-hour parade included what the New York Times described as “conventional weaponry,” including tanks, artillery pieces, and multiple-rocket launchers, but ICBMs and references to North Korea’s nuclear power were left out. The parade appeared to be more focused on economic growth.

That’s in keeping with a shift North Korean leader Kim Jong Un announced in April: Having successfully built a nuclear deterrent, he said, the country could focus on economic growth and scientific development. Kim reiterated that over the weekend, telling Chinese special envoy parliament chief Li Zhanshu that North Korea wants to learn from China on that front, according to Reuters. It’s a shift that both normalizes the country’s nuclear arsenal and reduces the risk of provoking further tension with the US.

“North Korea upholds the consensus of the Singapore meeting between the leaders of North Korea and the United States and has taken steps for it and hopes the United States takes corresponding steps, to jointly promote the political resolution process for the peninsula issue,” Chinese state television reported Kim said, paraphrasing him.

President Donald Trump and Kim met in a summit in Singapore on June 12. After the meeting, Trump declared that the nuclear threat from North Korea was over — whether that is actually the case has remained in question. There have been reports that North Korea’s nuclear activities continue, and in August, Trump called off Secretary of State Mike Pompeo’s schedule trip to the country.

Kim Yong-hyun, a professor of North Korean studies at Dongguk University in Seoul, South Korea, told the Times that in keeping ICBMs out, Kim “showed that he did not want to antagonize President Trump.”

The parade reportedly featured fewer missiles than usual and lower-range ones, and it included civilian groups such as nurses, students, and construction workers. North Korea also didn’t conduct any nuclear tests to mark the holiday, as it has for the past two years.

Others, however, were more cautious. Adam Mount, director of the Defense Posture Product at the Federation of American Scientists, told CNN that there’s “every indication” research and development of nuclear capable systems continues out of Pyongyang. “The United States should not forget about North Korea’s arsenal simply because it’s kept out of sight,” he said.

Trump took to Twitter to trumpet the parade and lack of ICBMs. “This is a big and very positive statement from North Korea,” he wrote. “Thank you To Chairman Kim. We will both prove everyone wrong!”

North Korea has just staged their parade, celebrating 70th anniversary of founding, without the customary display of nuclear missiles. Theme was peace and economic development. “Experts believe that North Korea cut out the nuclear missiles to show President Trump……

There have been more positive signs for US-North Korea talks as of late, as Vox’s Alex Ward recently pointed out. On Thursday, Kim told a South Korean official that he wanted to agree on a denuclearization plan by the end of Trump’s first term, and there’s an upcoming summit between Kim and his South Korean counterpart, President Moon Jae-in, later this month. Trump’s also been tweeting nice things about Kim.

Kim Jong Un of North Korea proclaims “unwavering faith in President Trump.” Thank you to Chairman Kim. We will get it done together!

Of course, the devil is in the details.

For vulnerable black communities, the pandemic is a “crisis on top of a crisis”
Biden’s planned actions on racial equity, explained
Trump’s new trade deal with South Korea, explained
What Biden should do if he’s serious about bringing down US health care costs
If Trump wins, 20 million people could lose health insurance. If Biden wins, 25 million could gain i...
Odd Job: What’s it like to be a real-life Disney princess?